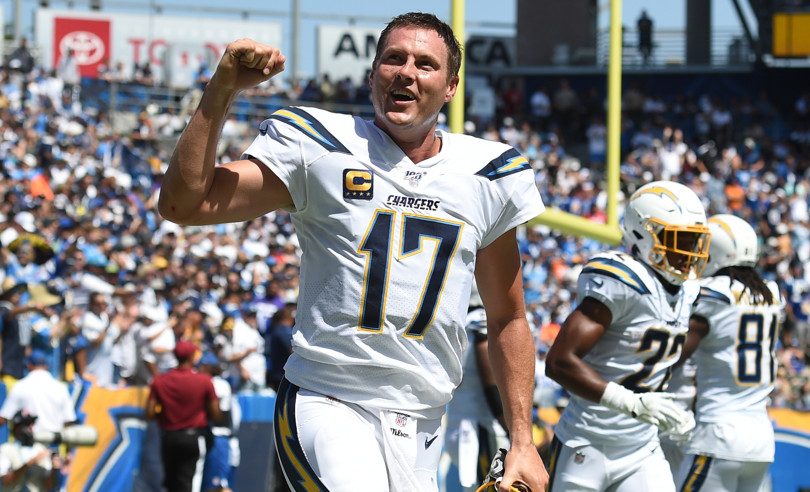 As we head into 2019 NFL Week 4 survivor pool picks, it’s hard to ignore the fact that an awful Miami Dolphins team and no massive upsets has resulted in a season with above average survival rates so far. How Miami’s season plays out will likely have a big impact on survivor pools this season, but things should at least get a bit more suspenseful with no 20-point spreads on the board in Week 4.

In this post, we’ll analyze the five most popular survivor and knockout pool picks of Week 4 2019 using the “Holy Trinity” of pick data we introduced in our first survivor post of the season: win odds, pick popularity, and future value. This deeper level of analysis is big reason why our subscribers have reported nearly $1.5 million in survivor pool winnings over the past two seasons.

This is an early assessment of the Week 4 Survivor outlook. If numbers have changed by Friday, we may update it later in the week.

For the 2019 NFL season so far, 14 of the 15 teams that have been among the five most popular survivor picks each week have advanced, with Carolina’s loss to Tampa Bay in Week 2 the lone exception.

Only a handful of less popular favorites bit the dust last week; Tampa Bay (2.0% picked by the public), Seattle (1.4%) and Philadelphia (1.2%) represented the biggest public eliminations. Overall, both the public and TeamRankings subscriber pick recommendations via our NFL Survivor Picks product survived at an extremely high 95% rate last week.

If you combine all three weeks so far, you would expect that about 70% of all public entries are still alive heading into Week 4. In comparison, around 81% of all TR pick recommendations have survived, a difference of 11% in survival rate so far.

Week 4 NFL Survivor Pick Analysis: How Much Do You Love L.A.?

NFL Week 4 showcases the two Los Angeles teams in the survivor spotlight. The Chargers win the scheduling lottery this week by drawing the Miami Dolphins. Meanwhile, the Rams get their first real survivor-caliber matchup this week when they host Tampa Bay, after playing two road games and a home game against the Saints.

Neither of the L.A. teams have been heavily used by the public so far this season. The Chargers had 10% pick popularity in Week 1, but other than that neither team has been used by more than 1% of survivor pool entries in any week so far. So you can expect that most entries in your pool have both teams as available options.

Without further ado, let’s analyze the five most popular survivor picks for 2019 Week 4.

[NOTE: these numbers have now been updated to reflect the most current information as of Friday, September 27.]

Miami continues to “break” survivor pools so far in 2019. The Dolphins are currently at least 8.6 points worse than every other NFL team in our predictive ratings, making them one of the best options to play against each week no matter the opponent. In fact, there are only three weeks when playing against the Dolphins is not the current top weekly win odds option for the rest of the year. The first is next week when they have a bye; the others are at home against Washington (Week 6) and Cincinnati (Week 16).

When Miami plays a decent team, it becomes even more extreme. The Chargers, despite their two consecutive close losses, are the clear safest play this week. The counterpoint is that the Chargers are not as safe as Dallas last week, and do have a bigger chance of losing on the road (our models estimate it’s 11%). As a result, LAC’s pick popularity is an important consideration here, and if it continues to trend higher (or you expect it to be above 50% in your pool), it would increase the appeal of a potential contrarian pick this week.

You also have to consider that Miami’s presence as a great pick-against option in most weeks reduces the future value of decent teams like the Chargers, when they are not playing the Dolphins.  The Chargers only have one other week where they look like a top three survivor option, in Week 16 against the Raiders. They are, though, a decent contrarian option next week playing Denver at home, when Miami is on the bye. New England is the safest option next week against Washington, but the Patriots already have high usage and also have better future weeks as well; after the Patriots, there are a handful of other matchups that are only slightly safer than the Chargers in Week 5.

The Rams have been used by less than 2% of entries so far in 2019, and the public appears eager to use them this week.

However, the drop-off from the Chargers to the Rams, in terms of safety, is not insignificant. Our models have the Chargers at 89% win odds versus 80% win odds for the Rams. The Rams’ popularity, meanwhile, is somewhat high for a “second most popular option” in a given week. Philadelphia drew 22% of public picks as the second option in Week 1, with similar win odds to the Rams this week. Baltimore was at 26% in Week 2 with better win odds, and the Patriots were at only 14% last week as a significantly safer favorite than Los Angeles is now.

The Rams do not have great future value for a team with Super Bowl aspirations. That largely has to do with when their best future matchups occur. The Rams look like they will be favored in almost every remaining game, but the weeks where they are likely to be favored by the most are also weeks with plenty of other good-looking options. So in terms of when they are the safest option, relative to the rest of the weekly slate, this week does rank highly and makes the Rams a more attractive team to use.

Just over a quarter of all survivor entries are playing against the Los Angeles duo this week and going with less popular but also riskier options. Of those, the Colts are the most popular choice, at 7% of entries. It’s easy to see why Indianapolis would be the most popular choice of that next group. They draw a home matchup with Oakland where they are a decent favorite (our models give them a 68% chance of winning). Indianapolis has not been used much, if at all, in survivor pools so far this year. So compared to other options, they likely are more available too.

Finally, Indy isn’t a great survivor option in most future weeks. That said, they do play Miami at home in Week 10 and are clearly the top choice that week in terms of survival right now. Our projections give the Colts a 94% chance of victory in Week 10, and they do not currently project with more than 71% win odds in any other matchup. The Colts are likely to be a hugely popular choice that week and so you have to consider now if you want to have them available that week, or go the contrarian route now, and do so again in Week 10 (when it may make a lot of sense).

The Chiefs make the list at 5% popularity, going against the 2-0-1 Lions on the road. They have a similar safety profile to several other teams around them, and our models give them a 73% chance of winning. The question if you use the Chiefs is “why this week?” – especially when they are only a 6.5-point favorite, and are a much better option in other weeks. They have the second-highest future value of any NFL team, and are particularly attractive in Weeks 13 and 15. In Week 15, for example, they could set up as a nice alternative to everyone who will be using the Giants against the Dolphins that week. A team like Kansas City will have its public popularity held down because so many entries will have used them by then, potentially making them extremely valuable as a high win odds option at home against Denver.

In a vacuum, using Baltimore looks pretty compelling as a non-Chargers pick this week, because their popularity lower than other options like the Chiefs, Colts, and Rams. Our models are also higher than the betting market on Baltimore’s chances this week, giving them the third-highest win odds at 76% (the market has them at 73%, similar to New England and Indianapolis), but either way, they are among the safest choices once you get past the Chargers and Rams.

Baltimore has already been used by approximately 40% of entries because they were a popular choice in both Weeks 1 and 2, which does limit how many entries even have the option of using them. However, they also have decent future value, including in Week 6, when they host Cincinnati and look like one of the best options, particularly if you want to save New England for a different week.

Get Our Customized NFL Survivor Pick Advice For Week 4

The teams mentioned in this post are the most popular picks this week, but that doesn’t mean one of them is the best pick for you. Every possible survivor pick has an expected value and future value associated with it, and those values vary based on the characteristics of your pool. It takes a lot of data and math to figure out which pick (or combination of picks, if you’re playing multiple entries) gives the biggest boost to your expected survivor pool winnings.

Enjoy NFL Week 4, and if you’re in an NFL pool or planning on betting some of the Week 3 games, please check out our NFL Survivor Picks, Football Pick’em Picks, and NFL Betting Picks.