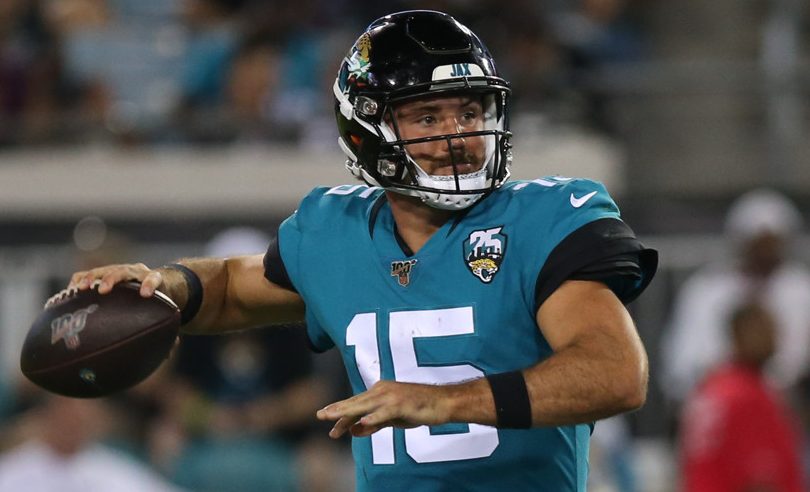 Do games with backup quarterbacks making their first career start show higher variance than other NFL games? The quality and experience level of NFL backup quarterbacks can vary greatly, from veterans with a long history of starting, to journeymen, to relative unknowns.

This week, Gardner Minshew of the Jacksonville Jaguars, a rookie sixth-round pick, will be the latest to make his first career start at quarterback after a Week 1 injury to starter Nick Foles.

You can see the full game odds info on our Jacksonville-Houston matchup page. The preseason look-ahead line for this matchup was Houston -3.5. After the Foles injury, the Week 2 point spread opened at several books at Houston -8.5.

In the last two years, we’ve seen some extremes when an unknown backup was elevated to starter. Last season, Nick Mullens of the San Francisco 49ers shocked the Oakland Raiders with a 31-point victory in his first career start. Conversely, Buffalo turned to Nathan Peterman in 2017, and the result was a 56-10 loss.

But those are just two extreme cases. What does more data show?

Over the last decade, 66 quarterbacks not drafted in the first round have made at least one NFL start.

If you exclude QB’s that opened the season as the starter (which includes guys like Andy Dalton, Russell Wilson, and Dak Prescott), that list shrinks to 58 non-first-rounders who made their debut start at some point during a season. The average point spread in those games was +5.5 points, with only 10 of the teams with a first-time starter being favored. Those teams went 26-31-1 ATS in the starting debuts. The games went over the point total 30 times and under 28 times.

To test whether these “first career start” games had higher variance than others, we looked at the closing point spreads and final game scores, to get the absolute value difference between the two. (“First career start” data is from Pro Football Reference, and you can use our Custom NFL Betting Trends tool to find spread and score data.)

As an example of how the data was compiled, if a team was favored by 3 points and won by 13, that would show an absolute value difference of 10 points from the spread. The same would be true if they lost by 7 points.

So on average, games from rookie QB’s getting their first start mid-season indeed seem “less predictable” using point spreads as the measure. Since 2009, outcomes where the final margin of victory was off 21 points or more from what the point spread implied happened around 50% more often than average.

But What About Wins?

In theory, higher variance games would be a slightly negative factor if you were wanting to back the money line favorite, and good if you supported the underdog, when comparing two money line options at the same point spread.

The chances of pulling an upset should be slightly higher if there was more variance in outcomes. This is why, for example, we see that money lines in college and the NFL do not match up for games with the same point spread.

This week, for example, Baltimore has implied win odds of about 85% as a 13-point favorite in NFL Week 2, with a -667 money line. (You can see the money line and other betting information on our Cardinals-Ravens matchup page.) Meanwhile, on the college side, Nebraska and Oklahoma State were both 13.5-point favorites, but with money lines of -530 and -518, respectively, implying win odds of around 82% and 81%.

That’s the theory, at least. But how did the actual game results go for our higher variance “new starter” games?

You would have expected 19.6 wins (out of 58 games) based on the implied win odds from the money lines for each of those games.

But the actual win total was 17 wins from the group, slightly below what you would expect.

So how do we get a situation where games with a first-time starting quarterback exhibit higher expected scoring margin variance than other games, yet those first-time QB’s win less frequently than you would expect, as mostly underdogs?

Is this just bad luck, or the result of a lack of NFL game experience? There could be an argument for both given the small sample size, as the first-time starters might be at a disadvantage compared to veterans when it comes to game management and other skills necessary to succeed in late game situations.

So we can’t just chalk it up to bad luck, but we can’t rule out that possibility either.

To wrap up, here’s what we found:

If you’re in an NFL pool or betting the games, check out our NFL Survivor Picks, Football Pick’em Picks, and NFL Betting Picks.