Mailbag: Roy Williams Has Never Reached The Elite Eight After Losing By More Than 20

We received an interesting email this morning:

I saw your Tweet where no team has lost by 30 then won the NCAA tournament. But it seems like Roy Williams has made some pretty deep runs after bad losses. His last Kansas team made the final after losing to Arizona by 17 at home. Maybe this is the year he wins it after losing by 30!
– Erik

That prompted us to do a bit of quick research. Just how much does a regular season loss by a Roy Williams squad tell us about its postseason prospects?

As the title of this post implies, there does seem to be something of a barrier around the 20-point line. Here is a plot of his team’s worst loss each year, versus the number of NCAA tournament wins he notched. The dark line is the best fit through the points (with an R^2 of only 0.17): 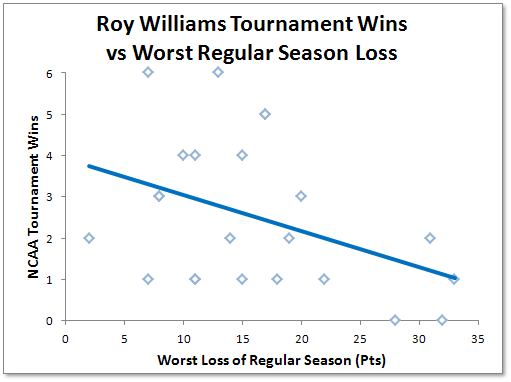 It’s fairly rare for one of his teams to lose by more than 20, but when they do, it’s generally a pretty bad sign for their postseason outlook. The teams suffering such a large beatdown have gone on to win 0, 0, 1, 1, and 2 games in the NCAA tournament.

Judging by the best fit line, this most recent loss — if it were the only thing we knew about the Tar Heels — seems to point towards a mere one win in the NCAA tournament.

However, once the tournament rolls around, we’ll also know UNC’s seed. The five previous teams that lost by more than 20 were seeded only #2, #4, #8, and missed the tournament twice (the two zero-win years). That means they underperformed slightly in the tournament, since we would have expected them to win 5 or 6 games, but they only won 4.

Tar Heel fans can’t be happy about the performance by North Carolina this weekend. And according to the historical record, they’ve got good reasons for their pessimism.