The Week 9 TeamRankings Football Challenge was one of the closest we’ve seen so far, with the top three finishers separated by only 4.64 points and the fourth place finisher missing a Finals seat by only 1.34 points.

Our Week 9 contest had a $10 entry fee, with a guaranteed $6,000 prize pool distributed to the top 300 scorers, who each doubled their money.

(And with thousands of people entering FanDuel contests with much lower expected returns, this is a great time to remind you why our weekly tournament is such a great value.)

Make sure to enter our Week 10 tourney as early as you can — it’s your very last chance to claim an entry into the Week 11 Final.

It was all about Raiders and Steelers, apparently.

Nroldanfanduel had a stack of three Raiders along with high scorers (and Steelers players) DeAngelo Williams and Antonio Brown powering the victory. He also added Pittsburgh kicker Chris Boswell. That’s a total of six players in the same game. 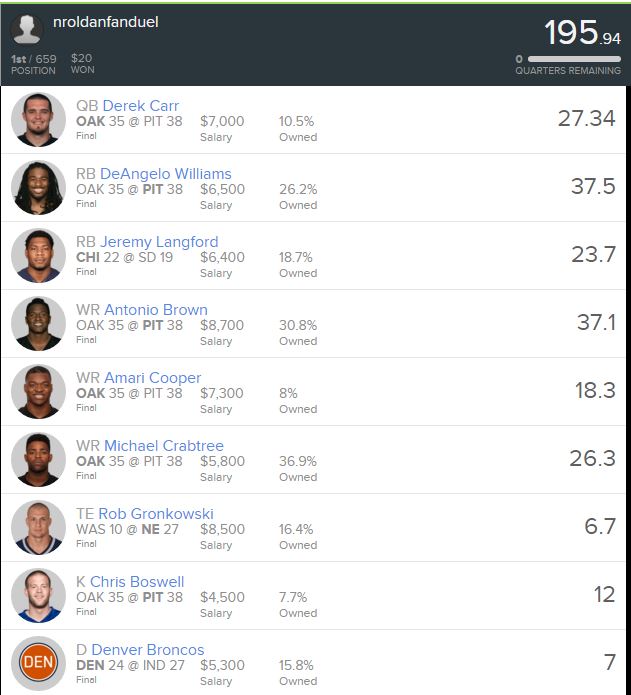 We’ll be awarding the final three entries into the $25,000 Week 11 Final of the TeamRankings Football Championship this week.

This week the entry limit is 25 per person, with the deadline on Sunday at 1:00 pm ET. The contest is now open, so don’t wait!