Week 7 broke new ground for the TeamRankings Football Championship qualifier, with one participant claiming all three seats into the Week 11 Finals.

Scorpio71 claimed the top three spots in the TeamRankings Football Challenge, our weekly FanDuel tournament for TeamRankings users. His three identical entries finished with a score of 186.52, just barely edging out redscare by 0.10 points and dwsweetpea by 0.18 points.

Our Week 7 contest had a $10 entry fee, with a guaranteed $6,000 prize pool distributed to the top 300 scorers, who each doubled their money.

(And with thousands of people entering FanDuel contests with much lower expected returns, this is a great time to remind you why our weekly tournament is such a great value.)

Make sure to enter our Week 8 tourney as early as you can — there are only three weekly tourneys and nine finals seats left!

Scorpio71 claimed all three finals seats this week, three identical entries tying for first. (FYI, the maximum number of entries per player is 25.) The result? At least $1,530 in profits, once our Week 11 Final is complete, on only $30 in entry fees.

Redscare notably had two entries finish in the top 10, while smccarty78 also had five entries tie for eighth place. 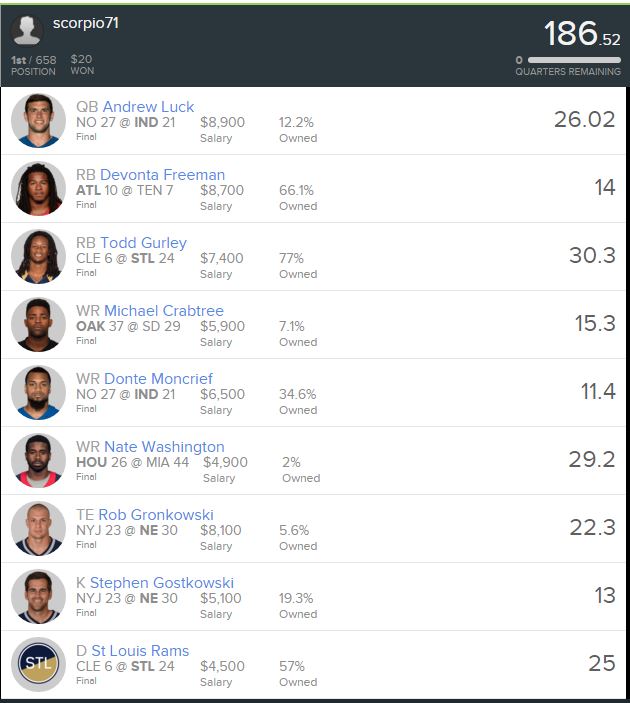 Analysis of the Winner

We’ll be awarding three more entries into the $25,000 Week 11 Final of the TeamRankings Football Championship this week.

This week the entry limit is 25 per person, with the deadline on Sunday at 1:00 pm ET. The contest is open, so don’t wait!