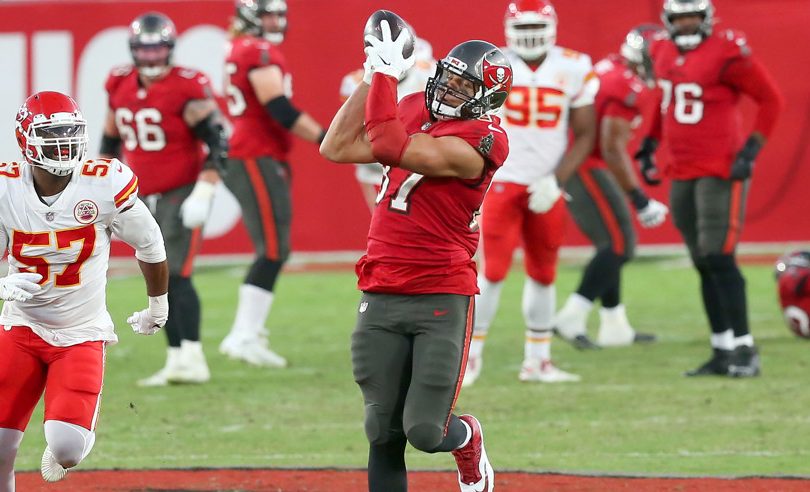 Rob Gronkowski is a fan of the 6-9 square, while we prefer 7-0 (Photo by Cliff Welch/Icon Sportswire)

In this post, we analyze the popular Super Bowl Squares betting game, a contest played and loved by so many Super Bowl party attendees nationwide.

Our primary intent is to estimate the value of squares for Super Bowl LV between the Kansas City Chiefs and the Tampa Bay Buccaneers, using an objective and targeted approach to square valuation based on historical scoring patterns.

Armed with the data and observations in this post, you should hopefully be able to pick, trade, buy, or bid your way to a bigger edge in your Super Bowl Squares pool. But even if your pool doesn’t allow any of that, you’ll at least have a solid idea of how likely your squares are to win a prize.

In the popular Super Bowl Squares betting game, each pool entry is associated with a pair of single-digit whole numbers (0 to 9), one number for each team. For example, an entry this year might have 4 for Kansas City and 0 for Tampa Bay.

The numbers associated with each entry can be determined in a variety of ways, such as:

Each number represents the last digit of the score for the associated team. Because there are 10 potential numbers for each team, there are 100 unique squares (10 x 10) available in total.

Once all squares have been assigned or sold, the score of the Super Bowl at various points (usually at the end of each quarter) will then determine who wins prizes.

Not All Super Bowl Squares Are Worth The Same

We are going to use data to generate value estimates for all 100 Super Bowl Squares this year, because some squares are worth much more than others in terms of giving you a chance to win a prize.

Because NFL point scoring happens in certain specific increments (e.g. 3 points for a field goal, 7 points for a touchdown plus extra point), certain numbers aren’t often the final digits of scores that are multiples or combinations of common scoring increments. Those numbers make for lousy squares, and vice versa.

How To Value Squares

Some people will try to dig up data on historical NFL score frequencies to research and value squares. That is definitely a step in the right direction, but we can go further by targeting our analysis of historical score frequency toward games that were most similar to Super Bowl LV between the Chiefs and Buccaneers.

Even if you are randomly assigned your square(s) in your pool, which is the most common rule variation, you can still use the square value estimates in this post to understand your rough expectation for prize winnings. In addition, you can use the value estimates to trade, barter, buy or sell or squares after your pool’s drawing, and hopefully pick up a bigger.

Of course, if you can bid on or otherwise select your own squares, you can use the estimated square values as a guide for which square to pick next or how much it’s worth paying for a certain square.

To estimate the value of squares for the Super Bowl LV matchup between Kansas City and Tampa Bay, we examined scores from relevant past games to see how often each scoring outcome occurred in each quarter.

The games we deemed relevant share the following characteristics:

Applying the constraints above provides a data set of 431 games (including both playoffs and regular season) to examine.

In taking this approach, we need to weigh historical game relevance against having a larger sample size of data. After all, we could have included every game in the NFL over the last 30 years and analyzed quarter-end scoring patterns for thousands of historical games.

However, NFL scores from way back in 1995 don’t seem especially relevant today, considering the extra point rules changes plus significantly increased overall scoring in recent years, as passing has become more prevalent in the NFL.

On the other hand, we also could have been more strict with our point spread and over/under cutoffs, and limited our data set to games that were even more similar to Super Bowl LV in terms of pre-game betting lines. However, that would have reduced the sample size even further.

We think this set of 431 games is a good tradeoff, though admittedly, it is not a huge sample size. So the square values we’ve generated by looking at these past outcomes should be viewed more as estimates than highly precise values.

For Super Bowl LV, for instance, we are confident that the 7-0 square is significantly more valuable than the 4-6 square, and that 4-6 is far more valuable than 5-5. But squares valued closely to one other should be seen as equal/in the same ballpark.

At the very end of this post, you’ll find two big charts:

For the sake of quick understanding and comparison, the dollar values of squares in the value chart are based on a sample pool where:

As an example of the underlying data at work here:

The $26.91 number is what you see in the “1st Quarter” column of the value chart, while the “Total Value” represents the sum of the values for all four quarters.

The chart is sorted by descending overall estimated value, but you can sort it by each quarter, or by each square number, as well.

One final note: The 45 lowest-value number combinations each have an estimated value between $0 and $5.00. The ordering of those 45 combinations is largely random noise, since we’re delving deep into some very infrequent historical scores by that point. So we wouldn’t put too much stock in saying that, for instance, 2-5 is definitely better than 5-5.

Finally, before we get to the data tables, here are some general observations based on our Super Bowl Squares value estimates.