This is a Final Four submission in our inaugural Stat Geek Idol contest. It was conceived of and written by Jeff Haley of hoop-math.com. For more from Jeff check out his posts from previous rounds.
Sweet 16 entry: Can The Kentucky Wildcats Be Beaten By The Fast Break?
Round of 64 entry: Play-By-Play Data Shows Why Wisconsin’s Defense Is So Successful

There is such a wide diversity of playing styles in college basketball. The pace at which different teams play is one of the major ways in which playing styles differ. Teams like North Carolina work to push the tempo, and shoot early in possessions. Other teams, like Wisconsin, play at a snail’s pace, milking the shot clock. Quick shots and shots taken later in a possession are often very different.

Analyzing play-by-play data is a powerful way to understand how offensive pace affects both the types of shots that a team takes, and the outcome of these shots. Using a play-by-play database that contains each play in over 4400 games from the 2011-2012 NCAA basketball season, I set out to try to understand the effect of pace on offense.

I generally like to break shot types down into several categories. In the first grouping, we have shots attempted at the rim, which includes dunks, layups, and tip shots. The second category is two point jump shots. The third category is three point jump shots. In this study, I have focused on the first shot of each possession. None of the shots considered are the results of offensive rebounds.

There are different ways that a team can take possession of the ball. While there are many ways that a possession can start, most possessions start in one of four ways. A team can:

How A Possession Starts Affects What Type Of Shot Is Taken 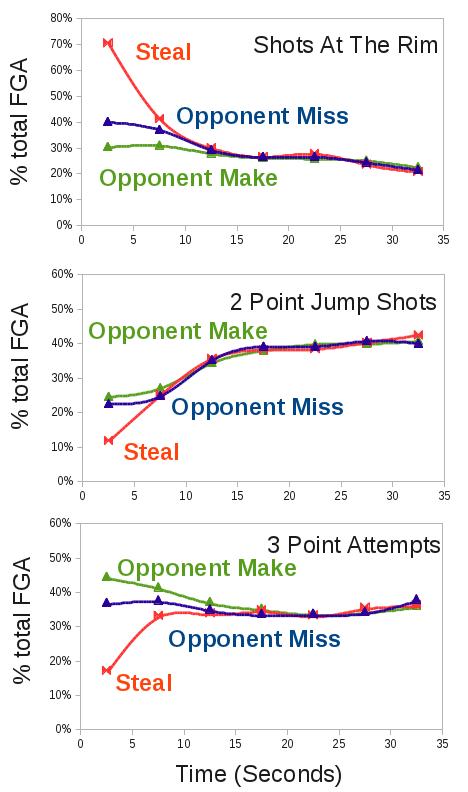 After a made basket by the opponent, shots taken in the first 10 seconds of a possession are more likely to be three point shots than any other shot type. After a missed basket by the opponent, attempts at the rim the most likely shot type to occur in the first 10 seconds of a possession. Teams shoot fewer early two point jump shots than any other type of shot.

While teams are more likely to take three point shots in the first 10 seconds of possessions after a made basket by the opponent, the field goal percentage on these shots is not as high as it is for three point shots that occur later in the possession.

We can see this in the figure below. The top panel in the figure below shows the effective field goal percentage (eFG%) for each type of shot as a function of time after taking possession of the ball. Again, these data are only for the initial shot of a possession. The data are color coded based on what type of shot was taken, and on the way that the possession started. Shots taken at the rim are indicated with the color blue, 3 point jump shots by the color red, and 2 point jump shots by the color green. Somewhat different shades of each indicate the origin of the possession. I have indicated with arrows in the figure a few cases where the origin of the possession appears to be meaningful. The bottom panel of the figure shows the average eFG% for each of the three shot types, where the average is taken over all of the different types of possessions. 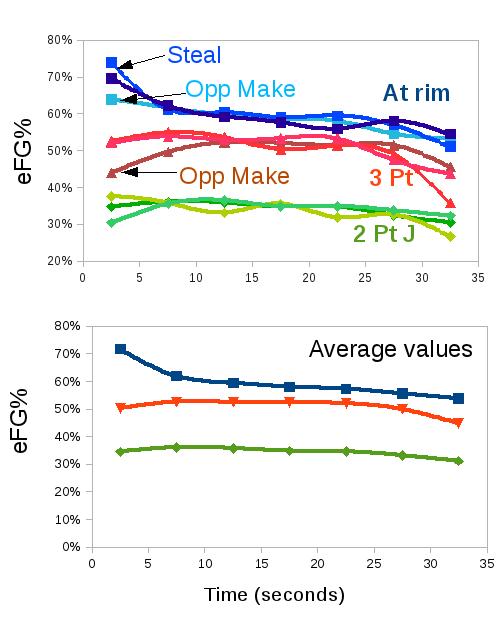 Shooting Changes As The Length Of A Possession Increases

Effective field goal percentage generally decreases for two point shot attempts as the time to the first shot increases. This can be best seen in the second panel of the figure above. As a possession becomes longer, teams generally have a harder time making shot attempts at the rim and two point jump shots, although at least for two point jump shots this decrease is fairly gradual. Effective field goal percentage from three point range appears to reach a plateau value of around 52%, before dropping off significantly as the shot clock winds down.

What Happens With Offensive Rebounds? 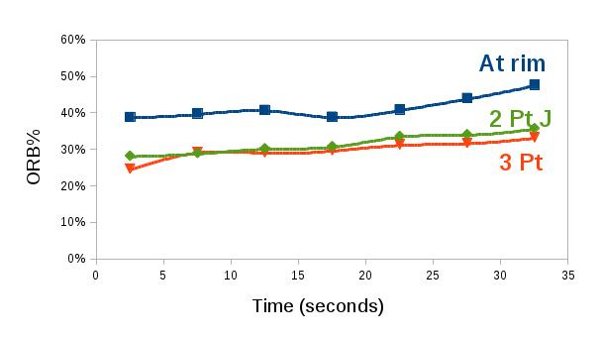 What Does This All Mean?

I think there are a few practical things that we can learn from these data about how offense works in college basketball.

1. Shot distribution is dynamic. The types of shot opportunities that present themselves change significantly throughout a possession, and at least early in the possession are greatly influenced by how the possession started. While this is no surprise, these data quantify the effect.

2. Transition offense can be very efficient. Shots taken in the early parts of a possession are generally the best shots that teams can get. Once the transition period of a possession is over, it becomes more difficult to get shots at the rim.

4. Getting to the rim is not only the most efficient way to score from the field, but missed shots at the rim are far more likely to be rebounded by the offense.

Remember, for more from Jeff check out his posts from previous rounds.
Sweet 16 entry: Can The Kentucky Wildcats Be Beaten By The Fast Break?
Round of 64 entry: Play-By-Play Data Shows Why Wisconsin’s Defense Is So Successful
And for more from the other contestants, explore the Stat Geek Idol category on the blog! 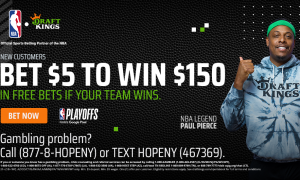