Week 4 of the 2022 NFL season in survivor pools comes down to a big question: Green Bay or someone else? 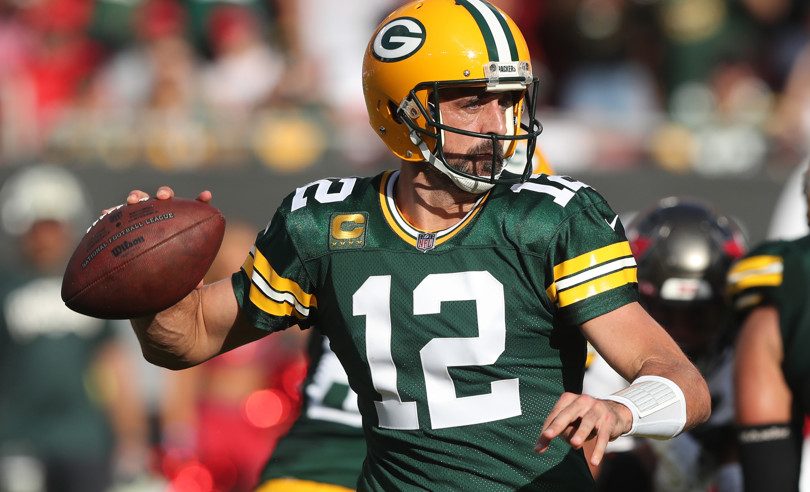 Week 4 is here in NFL survivor pools, and we got through a difficult Week 3 in pretty good shape. But now, we move to one with some big and gutsy decisions, so let’s get to it.

In these weekly columns, we explore strategies to maximize your edge in NFL survivor pools, also known as knockout pools or eliminator pools. We also provide some of the rationale behind picks potentially recommended by our product. We plan to periodically update this post until Sunday of Week 4 arrives, and we will also be posting video updates throughout the week as well, so check our articles section for those. Here’s what’s available now:

Here are the most popular teams early on for Week 4 of the 2022 NFL season:

The Packers are going to have high popularity this week, and for good reason. There is a fairly large safety drop-off from Green Bay. The Packers are favored by over 10 points against New England, who will presumably be without starting QB Mac Jones after he suffered a high ankle sprain against the Baltimore Ravens this past Sunday.

Only one other team (Philadelphia) has win odds over 70% as of right now. That means there’s a substantial risk trade-off going with other options.

On the other hand, the Packers do have really good future value because of their rising popularity, as they get the Giants and the Jets in the next two weeks. Week 6, when the Packers currently project as the biggest favorite against the Jets, looks a lot like this week in terms of the safety drop-off to other options.

So whether the Packers are a team to use now (for increased safety) or save for later (as a high-value play) may depend on just how high their popularity rises this week.

The Eagles are the second-biggest favorite this week (-6.5) versus the Jaguars, in a week where no one besides the Packers and Eagles are currently favored by more than five points.

The Eagles also have decent popularity, though isn’t prohibitive right now. They have a solid EV, too.

With that said, the Eagles project as our second-highest future-value team right now, trailing only Buffalo. We project them as one of the top survivor options in four of the next six weeks.

Just as with Green Bay, where Philadelphia projects will depend on just how high Green Bay gets in popularity, and whether Philadelphia’s EV climbs even higher.

The Detroit Lions are a survivor-worthy consideration this week against Seattle. That’s something you haven’t heard too often in the last several years. Detroit is favored by 4.5 points, and while the market odds are at 67%, our models are a little lower on Detroit this week.

One reason to use Detroit is that they have no future value. This looks like the highest they will be favored all year, barring some key injuries that impact late-season spreads against opponents like the Jets and Bears.

On the other hand, if they are too popular for a team that presents as much risk as they do, the Lions will have a sub-standard EV this week. With popularity in excess of 10% and with several other options having similar win odds at way less popularity, that is the case early this week.

The Chargers projected as one of the best options for this week, but a slew of injuries, and QB Justin Herbert struggling in a blowout loss to Jacksonville on Sunday while playing through a rib cartilage injury, has that in doubt. The Chargers are still the third-biggest favorite of the week at five points, with 68% win odds.

The Chargers now have fairly low future value. That’s in part due to a drop in their power rating, but also because the loss last week means most survivor entries have them available. They could now be very popular in Week 7 against Seattle, reducing some of the value of saving them.

The Chargers could be a decent contrarian play if their EV is high enough and popularity continues to fall.

Pittsburgh is the fifth-most popular option right now for Week 4, but that popularity is below 5%. The Steelers are a risky option at 62% win odds in the betting market, and only 56% win odds based on our models.

Several other options have similar win odds, also save future value, and are even less popular than Pittsburgh this week. That makes the Steelers a fairly unappealing survivor alternative in Week 4.

Week 3 looked like a treacherous week, and one that could have a high elimination rate. That proved true, but with the teams that the public was overly confident in, as Kansas City, the LA Chargers, and Buffalo all lost.

Here is a summary of the most popular picks for Week 3, and the results:

Based on our public pick data, only 53% of the public survived Week 3, while 47% got eliminated. Those rates will fluctuate in specific pools based on how frequently the Chargers were picked.

The pick rate for the Chargers was all over the place, depending on how sharp the pool was, when picks locked, and how many picks shifted late. Overall, about 15% of entries were on the Chargers, but that ranged from pick rates in the mid-single digits in some pools to still over 20% in others.

Meanwhile, our picks were focused on the Browns, Bengals, and Vikings, while largely avoiding the other popular picks. It took a comeback and a late touchdown in the Vikings game to prevail, while the Browns and Bengals won a little more comfortably.

That Vikings’ fortune made for an extremely good week for our subscribers. In a challenging week with high elimination, there were only nine total recommendations on the Raiders and Chargers, making up less than 0.1% of all PoolGenius subscriber survivor recommendations this week. A week with a 99.9% advance rate when nearly half the public is eliminated is about as good as it gets.

After three weeks, about 14% of all public entries are still alive (assuming no strikes and standard rules). As we noted last week, it’s a fairly high elimination start to the year, but not completely abnormal. The median result from the last decade is for about half of all entries to still be alive at this point, but there were two years (2018 and 2015) with higher average eliminations after three weeks.

Meanwhile, about 43% of PoolGenius subscriber entries are still alive. That puts our subscriber base as a whole at about three times the public survival rate. It’s taken some good fortune, as a lot of the teams we have avoided have lost. But to put that in some perspective, if we gain no additional edge and our subscribers win pot share at a rate of three times the public, that would be about even with our average performance over the last five seasons.