It may seem obvious to say that the goal of survivor is to win the pool, but many entries do not actually play with optimal strategy. 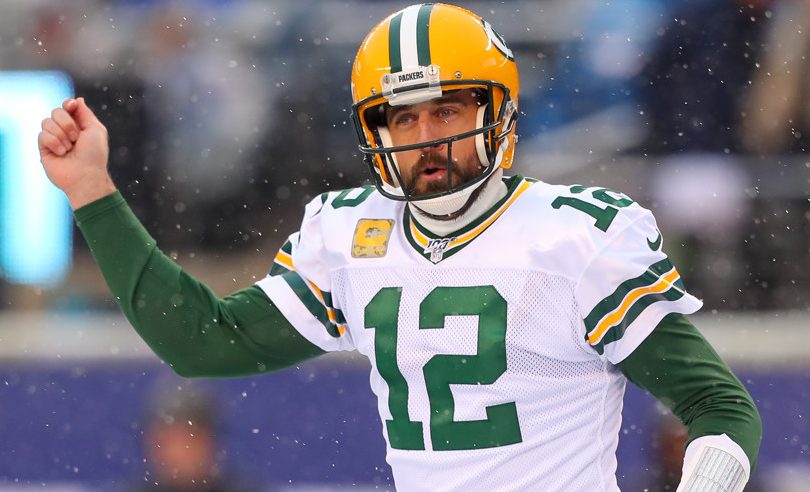 Just like Aaron Rodgers, you play to win the game, and remember everyone who doubted you (Photo by Rich Graessle/Icon Sportswire)

The goal in survivor pools is not just to survive the next week, it’s to thrive by making the key decisions that give you a better chance to get through a gauntlet of many weeks.

The number of weeks necessary to win a survivor pool varies based on your pool size, pool rules, opponent pick tendencies, and the specific game results of a given year. But unless you are in the smallest of survivor pools, the odds are you are going to need to advance through more than half the season, if not all the way to the end.

To do that, you need to take advantage of opportunities to save good teams when they arise, even if that means making slightly riskier picks in some early weeks. Using all the top teams simply to survive the first few weeks could put you at a disadvantage going forward.

There is no prize for being eliminated in Week 5 instead of in Week 1. Making picks with the goal of lasting until some arbitrary week can run counter to the best strategy for winning the pool. Sometimes doing the thing that feels the safest now harms your ultimate chances of being the victor.

Survival Is Not Everything

Imagine if the rules of NFL survivor pools were as follows:

In that case, your optimal pick strategy would be simple. To maximize your odds to win a prize, you’d just pick the biggest favorite of the week in each of the first five weeks. You wouldn’t care about saving teams for future weeks, and it wouldn’t matter which teams your opponents were picking.

That’s not how you win survivor pools, of course.

Their pick decisions, especially in the early weeks, are more aligned with achieving an arbitrary goal like making it to Week 6, or minimizing the chance of getting eliminated in the first three weeks. They completely lose sight of the fact that the only goal that matters is to survive at least one week longer than every other competitor.

That difference may seem subtle (I mean, won’t I probably have to survive until at least Week 7 in order to win my pool?), but the implications on pick strategy are huge.

The Illusion of False Hope

A mentality that you must survive the first four weeks, and use the four best teams, may increase your chances of being above average, in terms of the date you get knocked out. But it will probably get you knocked out nonetheless. We hear from new subscribers who say things like “I can survive to Week 8, but I want you to help me get over the hump.” However, they may balk at strategies that increase the odds of elimination before Week 8, but also increase the chances of success once you get deeper into the season, and overall increase the expected winnings.

NFL coaches demonstrate the same mentality when they fail to go for it in key spots. They would rather prolong being an underdog and “survive” as long as possible with the game outcome still technically in doubt. Often, they would win more games by risking a play that could end the game, but which also gives them the best path forward to victory.

If you do not plan for the future and take calculated risks when presented with opportunities, you will likely be the underdog when you survive the first half of the season. If you have already used all the best options for later weeks, you will find yourself in trouble even though you have survived.

Taking the biggest favorite each week may seem like a sure-thing, safe strategy. But even with that strategy, you’re not likely to get through an entire season, as upsets happen even with those top picks. But beyond that, you will not be able to successfully navigate a season with a mentality that you will only take the safest pick each week.

For one, you simply won’t be able to do it. Over the last decade, on average only eight different teams per season were the “top play” in at least one week (based on money line odds). There are 17 weeks in a season. A group of about three to four teams usually makes up the top option in the majority of those 17 weeks.

The Crowds Thin As The Season Progresses

A side benefit of focusing on surviving long term instead of just getting through the current week is that it can help you avoid picking the season’s most popular individual picks.

Here’s a chart showing the average percent of the public picking the safest option in a given week, broken into segments of the season. It also shows the pick rates for the 2nd safest option, the 3rd safest option, and all other options combined (with “safety” determined by win odds). This data is from 2010 to 2018.

You can see that early on, the best win odds option each week is extremely popular (at 37.9%, on average). By the end of the year, few entries are taking the top option, because most cannot. They have already used those teams. Meanwhile, the number of entries taking an option outside the top three in win odds nearly doubles late in the year.

By being willing to exercise some restraint when it comes to saving some of the top options, you both diversify from the crowd at key points earlier in the season, and can use those teams late when they have even better value.

To get through a season in a deeper pool, you will have to take teams other than the safest play at some points in the season. It’s unavoidable. Know that, understand it, and apply it.

If you look at it through that lens, that it is a matter of when, and not if, you will have to pick teams other than the top play on the board, then you will begin to develop the mentality necessary to win over the long haul.