Week 9 of the 2022 NFL season is here, and we have several value favorites showing up in your pick'em pools. 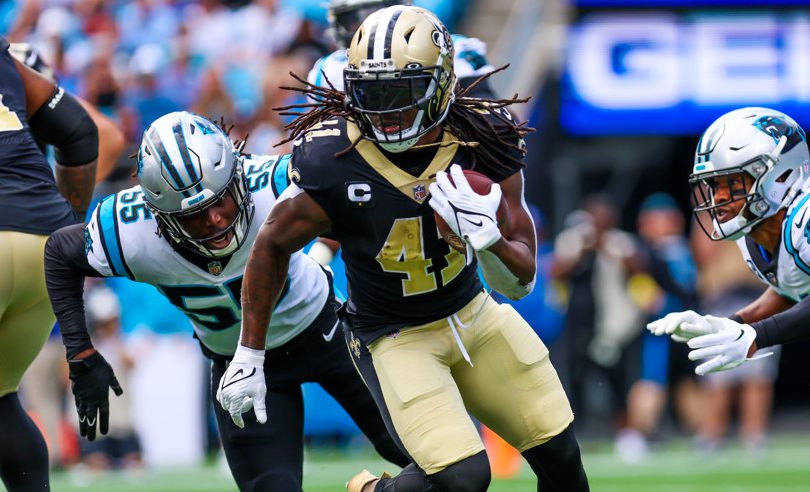 Week 9 in NFL pick’em contests gets us up to the halfway point of the season, and to the NFL trade deadline. It’s been a compelling season so far, with notable teams like the Bucs and Rams falling, and surprises like the Eagles, Giants, and Vikings emerging.

We plan to periodically update to this post through Sunday of Week 9, so check back for updates. Here’s what’s available now:

Here are some early value picks we are seeing in Week 9 based on win odds and popularity info.

The Saints are coming off a 24-0 win over the Raiders. They’re now a home underdog against a Baltimore team that just traded for LB Roquan Smith (from Chicago).

Our models give a slight lean to the Saints relative to the market odds. When you add in the extreme popularity in favor of Baltimore, that makes the Saints a good-value upset play in weekly pools.

Tampa Bay lost to Baltimore on Thursday Night Football last week. But it isn’t like the Rams are tearing things up, as they fell to a 3-4 record with their loss to San Francisco.

Neither of these teams have been able to run the ball. In fact, both rank among the seven worst teams in rushing yards to this point in a season since 1978.

Right now, the public is more evenly split on this one. That makes Tampa Bay a value favorite that should be part of season-long and weekly pick strategy.

The Raiders were embarrassed and shut out last week in New Orleans. They are staying east between games and will play Jacksonville next.

Teams that get shut out are actually decent plays the next week compared to the public perception. Right now, the public is picking the Jags more often.

Several key Raiders players did miss practice with an illness last week, so they have bounce-back potential here.

Arizona is the final small favorite where the public is picking the opponent more frequently. That makes the Cardinals a slight value favorite in a week where there aren’t a lot of great value options.

Arizona lost at Seattle 19-9 just three weeks ago, when it had two turnovers and went only 1-for-5 on fourth down attempts. Grab the slight favorite in this one, looking for revenge in the division rematch.

Our final value gamble on an upset this week is Washington, who gets to go against the 6-1 Vikings.

Washington has gone 2-0 with Taylor Heinicke at QB in place of Carson Wentz and is suddenly back in the playoff picture. Minnesota is 6-1, but it has not been dominant. The Vikings have allowed more yards than they’ve gained, and they rank near the bottom of the NFL in most pass defense categories.

Washington should have a chance to make plays through the air with Heinicke. The Commanders have a much better chance than the public is giving them in this one, which makes them an excellent value.

Week 8 was a fairly average week thanks to a few key results. Our picks in both game-winner and spread pools tended to come in near the public in most formats.

In game-winner pools, the public averaged 9.5 wins out of 15 games in Week 8.

The single biggest swing outcome was the Tennessee-Houston game. The public was very heavy on Tennessee, but the line moved to around a pick’em by kickoff with Ryan Tannehill out. Tennessee won even with rookie QB Malik Willis having only 55 yards passing, thanks to a monster day from RB Derrick Henry and some awful offense from Houston.

That single result swung the public and PoolGenius results in either direction by nearly one win.

The public was right around .500 in Week 8 in spread pools, averaging 7.6 wins in 15 games. The Jets, Patriots, and Chiefs were the most popular picks, and they went 2-1.

Our pick recommendations in season-long pools were just below that, averaging 7.3 wins in season-long max-profit picks. Meanwhile, weekly picks, which tend to also account for public pick popularity more to differentiate, finished just ahead of the public at 7.9 wins.

New Orleans and New England were big positive results in weekly spread pools, while losses like Arizona and Houston were notable negatives.