In season-long pools, you may need to adjust your strategy as the year goes on. We go through some key considerations. 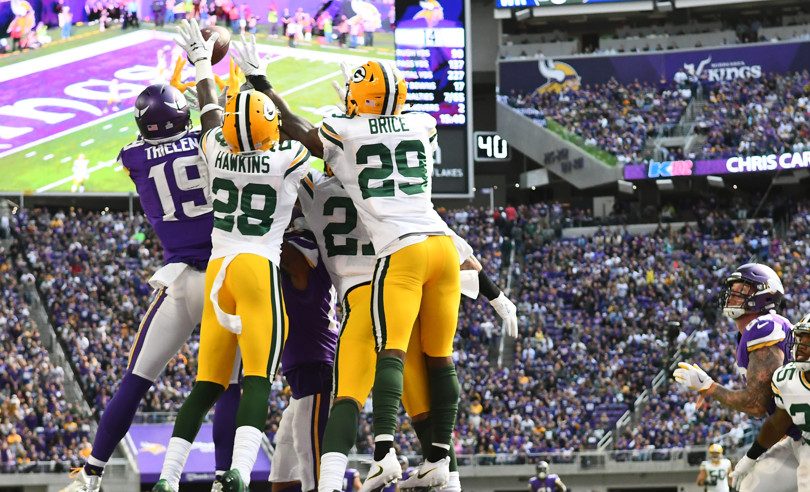 As we covered in the article on Pick Popularity and the Differences Between Season-Long and Weekly Pick’em Contests, the optimal balance of risk versus value changes depending on the situation.

In season-long pick’em pools, starting with a conservative picking strategy that emphasizes safety over risk-taking is often optimal.

In most pools, many opponents will employ picking strategies that are unsophisticated and/or irrationally biased in some way. Maybe they refuse to pick against their favorite team, or they overreact to the previous week’s results. Perhaps they arbitrarily think they need to pick three upsets per week. Maybe they don’t check the latest betting odds for every game when they go to make their picks.

The NFL season is long enough that in a typical year, most opponents using flawed picking strategies will have a tough time cracking the very top of the standings after 10 or 12 weeks. They may get lucky and do very well over a span of weeks. Over time, though, their inherently flawed strategy usually catches up to them.

Consequently, using objective data like betting odds and our predictive models to focus your picks on the most likely winners each week is a relatively low-risk strategy that can often result in you either being “in the money” or within striking distance of a season prize as the pool enters the home stretch.

However, there may come a point in your season where switching strategies becomes the best play.

That general strategy of minimizing risk should work out favorably for you versus most of your competitors. But what happens when you have used the strategy but find yourself still chasing some leaders late in the year?

While the number of games in a season-long NFL contest are much larger than most other types of pool contests, 17 weeks isn’t an eternity.

Further, especially in larger pools, there are decent odds that someone (or a handful of entries) is having a great season, even as most entries have fallen by the wayside.

That means that it isn’t uncommon for some of the following scenarios to happen:

Risk-Taking Can Increase if Trailing

If you read the article on “What a Winning Entry Looks Like,” you can see some examples of the range of outcomes for teams that eventually won a pool. Plenty of eventual winners had mediocre starts and found themselves well behind the leader after the first month.

If you find yourself behind with five weeks to go, chasing several entries to finish in the money, it may be time to get riskier. Simply moving forward with the same conservative strategy will all but ensure you stay behind the leader. That’s especially true if they use intelligent strategy and become more conservative themselves.

Taking Risk to Maximize Your Chances versus Avoiding a Bad Finish

When you take more risk, you create more variance in your performance. When you are trailing, this is a good thing, as long as your goal is to win the pool. It could be a bad thing, though, if you are motivated by other factors. If your goal is bragging rights, and finishing ahead of most of the people in your office, then taking risks to increase money may not be for you.

That’s why we ask our subscribers to tell us what their goals are. We use those answers to present different pick suggestions in some cases, depending on whether you are okay with risking a drop in the standings (the more likely outcome when making riskier picks) in exchange for the chance of a larger move up the standings (the upside if those unpopular risky picks do hit).

In “Maximize Profit” mode, the goal is to win the most money possible over the long term, with no concern for whether that results in a lower chance of finishing in the money in any given year. This strategy would prefer to win one $1000 first prize every 10 years, rather than consistently picking up a $75 in-the-money finish every year.

Thus, if you are significantly behind winning one of the biggest money prizes in your pool in the final weeks, this strategy may suggest higher risk picks in a last-gasp attempt to make up ground in a short period of time. Those super risky picks will give you a slightly better chance to pull off a miraculous surge in the standings over the final weeks (or catch a leader who’s pretty far ahead) if the stars align and lots of underdogs win.

If you want a football analogy, this is the equivalent of going for it on 4th and long deep in your own territory late in a game. It could lead to a bigger margin of defeat, but also gives you a fighting chance for a comeback.

“Win Something” mode isn’t quite as aggressive as the Maximize Profit mode. The goal for this strategy is to give you the best possible chance to finish in the money in a given pool, even if that might mean sacrificing a bit of long term expected profit.

For the most part, it is similar to the Maximize Profit approach. This biggest difference comes when you are sitting in a prize winning spot but trailing the leader. In this case the Win Something strategy may suggest more conservative picks, placing more emphasis on trying to hold on to that prize spot, even if that reduces the chance of moving up the standings for a bigger prize.

If you’re significantly behind the final prize position in your pool during the final weeks of the season, though, you are also going to see some very risky picks as the strategy shifts into end-of-season Hail Mary mode.

The “Avoid Bad Finish” mode effectively continues the conservative picking strategy used for the majority of the season all the way through the final week. It continues to ignore factors like your current position in the standings, and simply keeps picking the teams we project as most likely to win or cover the spread. The downside, of course, is that these picks are not designed to maximize your odds to win a prize if you’re behind and time is running out, and the pool is ending soon.

If you’re currently “out of the money” in the standings, using these picks over the last few weeks is akin to punting on 4th-and-6 from your own 30-yard line with 1:30 left in the game and your team down by 4. You’re most likely conceding defeat but minimizing the chance that your opponents run up the score on you.

While we understand that some people may prefer to avoid finishing poorly, and thus want to remain conservative, you will maximize your profits if you play to win the pool. This means being willing to adapt your strategy to the specifics of your pool situation. Based on our research, it’s best to be willing to alter your strategy with about five weeks remaining in the pool.

If you are leading …

Stay the course if you have the lead late in the season. The best approach with a lead is to pick favorites and make those chasing you take the risks. For one, some people will not play optimally, and won’t realize they need to take some calculated risks. For another, they have to get key games right where their odds are less than 50%.

If you are trailing …

The specific strategy will depend on exactly how far behind your entry is, how many games are left, and what the chances of success are.

Does this mean that you will be taking only underdogs? Probably not. But just as some optimal weekly prize strategies include finding value picks and playing a few “value gambles,” the number of key gambles will depend on the specific number of wins/points and entries you are trailing. If you are down two wins going to the last week, finding a handful of value plays may be appropriate. If you are down four wins, you are probably going to be taking bigger swings with very unpopular longshots.

But the most important thing to remember is that in order to win a prize in a pool, you may have to shift strategies based on changing information. Just as you should take into account late-breaking news (such as a quarterback injury) in making picks, you should take into account changed information late in the season that puts your position in the pool in greater focus.