Week 9 of the 2022 NFL season in survivor pools features two familiar faces in Philadelphia and Buffalo, and the re-emergence of Kansas City. 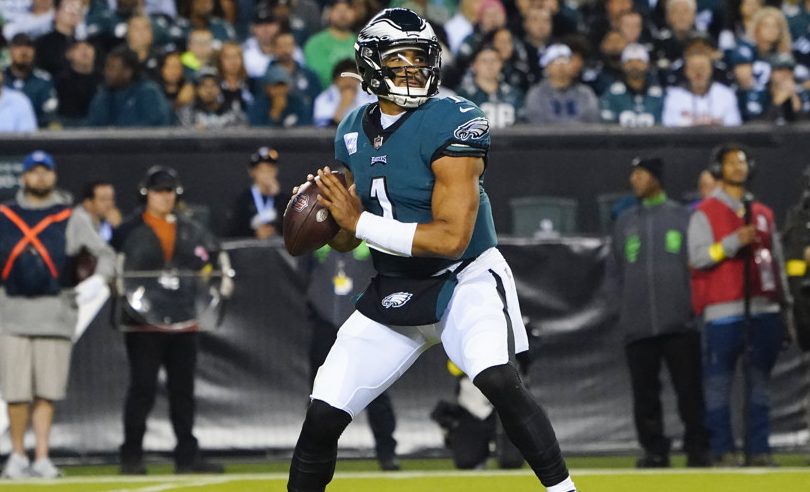 For the second week in a row, the Eagles and Bills are the biggest favorites. This time, they are joined by the Kansas City Chiefs, who will also become frequent survivor options as well.

Should you consider one of those three or an alternative?

We plan to periodically update this post until Sunday of Week 9 arrives, and we will also be posting video updates throughout the week as well, so check our articles section for those. Here’s what’s available now:

Here are the most popular teams early on for Week 9 of the 2022 NFL season:

Let’s quickly go through these teams.

Philadelphia looks like it will be one of the most popular picks this week, although that popularity would undoubtedly be even higher if it was more available. The Eagles are favored by 13 points, and their 87% win odds according to our models matches Buffalo in Week 5 for the highest so far this year.

Despite having popularity above 20%, Philadelphia has a very good EV this week of 1.13. The Eagles have other high future-value weeks, and that value will remain high as more entries use them.

The majority of entries have already used the Eagles in most pools by now. That will only go up after this week if they can get to 8-0.

The Bengals project as having similar popularity to Philadelphia and Kansas City, but they project as being riskier than both of those options.

Whereas the other two are favored by double digits, the Bengals are a seven-point favorite with 71% win odds, according to our models. That means Cincinnati will likely have a much lower EV this week.

Right now, this is the last spot where they look like they will have win odds over 70%. The next-most likely remaining survivor week for Cincinnati is in Week 11 at Pittsburgh.

The Kansas City Chiefs have had the toughest part of their schedule early in the year. This is the first time aside from the Week 3 loss to Indianapolis when Kansas City has been among the five most popular picks.

That means most entries should have the Chiefs available.

Kansas City is a 12.5-point favorite against Tennessee right now. Like Philadelphia, the Chiefs have a really good EV, but they also have high future value.

Kansas City has four future weeks where we project it for 80% or higher win odds, including next week against Jacksonville.

We project the Bills to have win odds of 80% or higher in seven future weeks. They also have a very good EV this week because of their win odds and moderate popularity.

Miami has much lower win odds than the other top options this week, as it is a five-point favorite at Chicago. As a result, the Dolphins have a much lower EV.

They do have lower future value, but it isn’t zero. They project as one of the highest win-odds options in Week 12 when they face Houston.

The extent of their value that week will depend on popularity and availability.

After several weeks of chaos, nearly everyone advanced in Week 8, including several riskier picks. For the first time this season, all five of the most popular picks advanced.

Here is a summary of the most popular picks for Week 8, and the results:

Based on our public pick data, over 92% of the public survived Week 8. There were no significant losses, and the Colts and Bengals were the likely most common losses in survivor pools this week.

The closest call was in Atlanta, where a wild sequence of events included Carolina hitting a deep pass with just seconds remaining, but missing the game-winning extra-point attempt after a celebration penalty. Carolina’s kicker then missed a short kick in overtime, allowing Atlanta to survive.

Over 99% of our pick recommendations advanced, with the Colts’ loss responsible for the most PoolGenius eliminations.

Unfortunately, our picks did use relatively more future value than the public in advancing, as most of the riskiest picks did get through.

After eight weeks, only about 2% of all public entries are still alive (assuming no strikes and standard rules). Pools that started with 50 entries or fewer may be done, and even those with over 100 entries at the outset may now be finished, depending on the specific pool picking rates.

About 9% of PoolGenius subscriber entries are still alive. That still leaves our subscriber base advancing about 4.5 times more often so far than the public.

While Week 8 slowed the elimination rate, we are still well ahead of most years and are still on pace for pools to end earlier than normal.

Here’s where our pick recommendations are going as of 10:00 a.m. ET on Sunday morning.

The last five columns in the table show how our recommended picks vary by subscriber pool format/rules. The table shows every team with at least 2% public popularity and/or is drawing more than 0.1% of PoolGenius recommendations.

We haven’t seen any major shifts in our strategy and where the recommendations are going since Friday. New England’s spread and win odds rose a little on Friday but have since settled back again.

Here’s an overview of where our strategy is going:

It’s not quite as concentrated as last week, but we are still using a fair amount of future value because of the relative win odds and safety difference. The gap between the top two options (Philadelphia and Kansas City) is larger than we’ve seen, or will see, in most other weeks this year.

The Eagles are in the books with a win, which means about 20% of the public has already advanced to next week.

That outcome reduces the overall EV of every other pick since there is a 0 percent chance of benefiting from a big upset. However, the relative impact is across teams is fairly similar, so you should not see much impact on our pick recommendations because of that result.

A higher percentage of the relative EV gain of picks like Kansas City and Buffalo were from potential upsets of the riskier options, not as much on the Philadelphia result.

About 21% of our recommendations were on Philadelphia last night, largely mirroring the public, and it wasn’t any higher because of lack of availability.

Here are is the strategy that we are seeing heading into the weekend, for the remaining teams:

We’ll continue to monitor. The difference between New England and Cincinnati isn’t huge right now, for example. New England has a little lower future value and is slightly riskier, but is less popular.

If we see shifts in the odds in those two games, it could impact which lower-future-value option is preferred.

Eagles on TNF to Start Week 9

Thursday Night Football kicks off with a bang in Week 9. Well, at least for survivor pools, as the biggest favorite of the week, the Eagles, play right away.

That means we should know right away what kind of value proposition we have for the rest of the week, depending on whether the Eagles win or Houston can shock the world.

As noted yesterday, the Eagles’ availability to PoolGenius subscribers is impacting pick strategy. Right now, we are slightly above the public on the Eagles. We’re recommending the majority of entries that still have them available to use them. However, we always see the denominator change as people come for picks later in the week, so that could ultimately mean our percentages are just below the public on Philadelphia.

Either way, it’s a pretty big game, as nearly 20% of a typical pool will have action on tonight’s game. We’ll recap the impact tomorrow either way.

The availability of Philadelphia for our entries is a big driver of the pick strategy this week.

In most cases, the advice is to take the Eagles as the top-graded option if you have them (subject to portfolio distribution). But most of our entries no longer have Philadelphia. That’s through some combination of design and the way things have worked out in this wild year.

In three previous weeks, Philadelphia has made up between 25-30% of our advancing entries:

In two of those three weeks, the Eagles were one of our alternative picks in a week where there was a bigger wipeout of public and PoolGenius entries. As a result, they are not available to most entries.

In standard-rules pools that started in Week 1, 84% of entries that have reported in for this week have already used Philadelphia. That number is a little lower in other pool types that have focused more on future-value savings, but the Eagles have still made up some key past picks to get through tough weeks.

The Eagles are generally grading out as the top option this week, but they are not our most frequent recommendation because of availability.

The grading between Kansas City and New England, and the philosophical choice between higher EV and preserving future value, is largely dependent on pool size and type. Practically speaking, with most pools trending smaller at this point, the more common pick is Kansas City.

We are seeing the Chiefs at the most frequent recommendation, followed by the Eagles and Patriots, with a smaller number on both Buffalo and Cincinnati. Those also happen to be the five most popular public picks, though our weighting and order of preference is different than the public.