The Week 9 survivor outlook includes four teams with popularity above 10 percent, and no team above 30 percent this week. 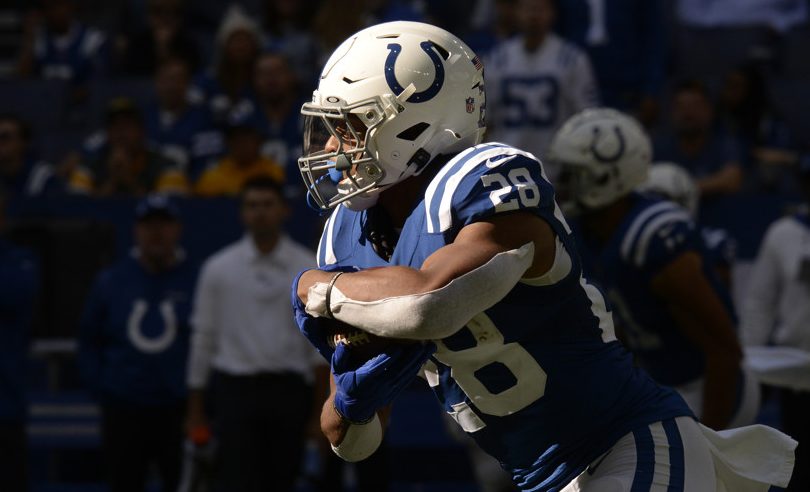 This is an early summary of the most popular picks so far in Week 9.

No other team is currently being picked by more than 4 percent of the public in Week 9. Let’s go through these options.

Even after the Jets’ great performance last week, the Colts are still double-digit favorites on Thursday Night Football. (That result is accounted for in the spread, as the look-ahead line was 14.5 points before last Sunday but has since gone down four points.)

The Colts give a decent combination of win odds and expected value.

They were already the most popular pick in Week 6, which is limiting the extent of their popularity this week. Outside of Buffalo, Indianapolis has one of the best EVs of the week since a majority of entries are taking riskier teams right now.

The Colts have some future value—they’re 10th in our future-value estimates for a 100-entry pool—but that’s down from last week since this is one of their higher-value slots.

The Dallas Cowboys are a 9.5-point favorite over Denver, the third-largest of the week. Our models are a little lower than the market on them, at 77 percent win odds.

The Cowboys have a mediocre EV because 40 percent of entries are on teams with higher win odds, and they have moderately high popularity for a second choice.

The main reason to consider saving them is future value, as they’re now up to the fourth-most in our future-value estimates. That is driven in part by Week 12, where they are the biggest projected favorite in a difficult week with a lot of even-looking matchups.

Buffalo is going to have a high EV most weeks from here on out. The Bills are the biggest favorite of the week and are only moderately popular.

The big consideration is the relative value of using them now versus saving them depending on the other options you have available. They have the highest future value of any team, and we project them with win odds of 85 percent or more in four later weeks.

The Miami Dolphins have the lowest future value of any of the options this week, which is why they’re attractive as an alternative pick. They are riskier than the top three options, but compared to the other alternatives, they do save more flexibility for future weeks.

Whether to use them may depend on how sharp your pool is with regard to future-value preservation. If low future-value teams get picked at a higher rate, their EV goes down further.

Miami is a more interesting option in multi-pick pools, those with wins tiebreaker, and those that extend into the playoffs.

The Steelers have a slightly lower EV than the other alternatives who have between 65 and 70 percent win odds because of their relatively higher popularity.

They do have fairly low future value, most of which is tied up in next week when they host Detroit. They project as the most popular pick of Week 10 with a moderate EV.

For the first time this year, the most popular pick in survivor pools lost. Jets QB Mike White had an outstanding game in his first career start, and the Jets shocked Cincinnati 34-31 after trailing 31-20 late in the fourth quarter.

We also came close to the second-most popular pick losing, as Kansas City survived on Monday Night Football by getting a late field goal to beat the Giants.

Here is a summary of the most popular picks for Week 8, and the results:

Led by the Cincinnati loss, roughly 50 percent of entries were eliminated in Week 8. We had the Bengals as the second-most frequent recommendation, trailing Kansas City by nearly 20 percent, and about 72 percent of TR recommendations survived.

Aaron Rodgers Being Out Could Shake Up Survivor Landscape

Aaron Rodgers is out for Sunday after testing positive for COVID-19. That has moved the Kansas City-Green Bay game from a toss-up with the Chiefs favored by just one point to a much larger spread.