Tampa Bay and Kansas City are the most popular survivor picks in NFL Week 8, but a dark horse play could be better for some pools. 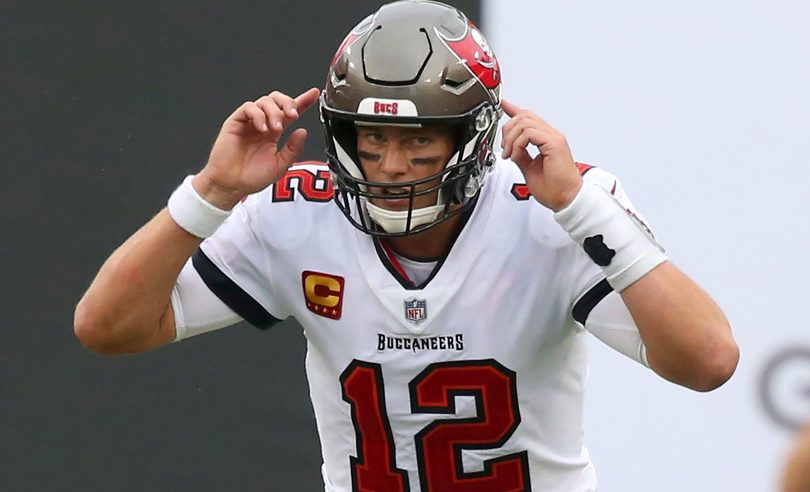 Entering NFL Week 8, the two New York NFL teams continue to compete both for the first overall pick in next year’s draft, and also for most popular team to pick against in survivor pools. Week 8 will mark the seventh straight week in which either the Giants or Jets are the opponent of the most popular survivor pick of the week.

This week, a total of around 65% of survivor pool entries are picking against one the two teams from the Big Apple.

Almost everyone survived in Week 7. All of our subscriber recommendations survived the week, while the public only lost about 2% of its entries, mostly via losses by Seattle, Dallas, and Atlanta.

Here is a summary of the weekly pick rate by the public, and our final subscriber recommendations, for any team picked 2% or more by either.

Even though the survival rate was similar, our recommendations did a better job of preserving future value. 12% of public entries used the Chiefs, just ahead of KC’s matchup with the Jets this week. Another 3% of the public used up the Packers, who have had moderate pick popularity in a few weeks so far.

We didn’t have any subscriber picks on the Chiefs, and we’ve recommended Green Bay for less than 1% of subscriber picks so far this season. Green Bay has one of the higher future values over the second half of the season, so keeping them available to use is big.

Below, we break down the public’s five favorite survivor picks this week, evaluating the pros and cons of each pick.

You’re probably thinking about picking at least one of these teams, but remember there are also other options to consider in Week 8, and highly contrarian picks can sometimes provide a solid boost to win your pool.

(At the end of the post, we’ll tell you how to get our Week 8 survivor pick recommendations, customized for your pool’s size, rules, and the teams you’ve already picked.)

Tampa Bay has become the most popular pick this week, getting the Giants on the road. In most weeks this year, the Bucs would have been the largest favorite of the week, but this week they are a distant second to Kansas City in terms of win odds.

With just over 80% win odds, though, the Bucs are a solid step up from the next-safest option this week (as of Wednesday, the Eagles).

Tampa Bay also has good future value. They have been rising in our predictive power ratings, and are now the third-highest rated team, behind only Kansas City and Baltimore. The Bucs also rank fourth in our future value estimates, behind KC, Baltimore, and Pittsburgh.

Such high popularity reduces Tampa Bay’s EV, though, especially in a week in which a bunch of entries picking Kansas City have a significantly higher win expectation. (The public hasn’t used Tampa Bay as much as it has used Kansas City so far, which explains the Bucs’ rising popularity relative to the Chiefs.)

It’s not often that you can take a team with over 90% win odds in NFL survivor pools, but that option exists this week when our No. 1 ranked Chiefs play the No. 32 Jets at home.

Kansas City hasn’t had huge pick popularity in any particular week so far, but the Chiefs have been selected by between 9% and 13% of the public in four different weeks, including a few weeks where a good number of entries not picking KC were eliminated. As a result, about half of all public survivor entries that are still alive have already used the Chiefs. That factor is limiting KC’s popularity, giving them the highest Expected Value of the week by a sizable margin.

The Chiefs do have very high future value, though the gap is closing between them and other teams, in part because their favorable situation this week is no longer part of the future. How good a choice Kansas City is depends on the specifics of your pool, as in some larger pools holding on to them might still make sense.

Green Bay is the third most popular survivor pick this week when they play Minnesota at home, a team they have dominated in three games over the last two seasons.

Green Bay’s win odds, though, are more than a 20% drop from Kansas City and a tier below Tampa Bay as well.

Green Bay also is fifth in our future value rankings, meaning that using the Packers now in a not-so-obvious spot takes away that option in the future. The Packers get Jacksonville at home in Week 10 when they project as the largest favorite of the week, and they also have good matchups at home against Chicago, Philadelphia, and Carolina in future weeks.

The Titans have similar win odds to Green Bay, and similar popularity, which makes their expected value for this week in the same range.

Tennessee’s future value is not as high as Green Bay, though, and for that reason they should be a more attractive pick if you are avoiding Kansas City or Tampa Bay (or don’t have either of those teams available).

Tennessee doesn’t have any clear high-value spots going forward, but could be a reasonable option in multiple weeks, including next week at home against Chicago.

A few weeks ago, this game did not look like it would be on the radar screen as a potential survivor pick consideration. But Dallas has tanked without QB Dak Prescott over the last two games, scoring only 13 points and losing by a combined 50 points against Arizona and Washington.

It’s still not entirely clear just how bad Dallas is without Prescott, but the early returns aren’t promising. That has shot the Eagles up as a larger favorite, and we still don’t know if Dallas backup QB Andy Dalton will be available after a concussion in Week 7.

Philadelphia also has very low future value, which adds to their attractiveness this week. We currently project the Eagles to be an underdog in five of their next six matchups.

Get Our Week 8 Survivor Pick For Your Pool

To recap, we are not saying that the first team listed above, the Tampa Bay Buccaneers, is the best Week 8 survivor pick for your specific pool(s). We’re telling you that the Bucs are the most popular Week 8 survivor pick in pools nationwide, while the Chiefs, Packers, Titans, and Eagles are the public’s next most preferred plays.

A season-high 95% of survivor entries this week are picking one of those five teams. Should you join them? Maybe, maybe not.

The best Week 8 pick for your NFL survivor pool depends on a variety of important factors, including the number of entries still surviving in your pool and its rules. It takes a lot of data and math to figure out which pick (or combination of picks, if you’re playing multiple entries) gives the biggest boost to your expected survivor pool winnings.

To get our specific Week 8 pick recommendations, hop over to our NFL Survivor Picks product (link below), tell us a few details about your survivor pool(s) and the teams you’ve picked so far, and you’ll see the picks we recommend for each of your entries.