Week 7 of the 2022 NFL season in survivor pools has multiple teams to consider, including the Patriots and Raiders emerging as survivor picks for the first time. 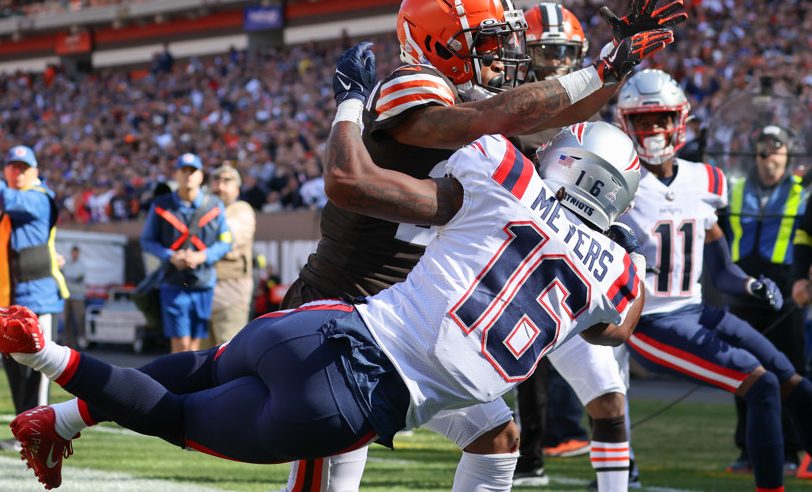 Week 7 is here, and some big name teams are on byes this week, with the Bills, Rams, Eagles, and Vikings out of action. That means fewer choices for survivor pools, but there are several options available in Week 7.

We plan to periodically update this post until Sunday of Week 7 arrives, and we will also be posting video updates throughout the week as well, so check our articles section for those. Here’s what’s available now:

Here are the most popular teams early on for Week 7 of the 2022 NFL season:

Week 7 stands out as an oasis in what is about to become a desert of options. After this week, things can get a lot tighter, especially if you don’t have teams like Buffalo, Philadelphia, Kansas City, Tampa Bay and Dallas available.

But there are at least four options this week where this might be the best or second-best spot to use them this year in terms of win odds. New England leads the way, facing Chicago as an 8-point favorite, and is the most popular pick.

The case for New England is decent win odds and little future value. But higher popularity and a lack of extremely high win odds makes for a relatively lower expected value.

Tampa Bay draws the woeful Panthers offense this week and is the biggest betting favorite for Week 7. Granted, Tampa Bay just got to face a team that was struggling on offense and lost 20-18 to Pittsburgh.

Given their high win odds relative to other options and popularity being spread out across those options, the Bucs have a pretty high EV this week. The trade-off there is that they also have the highest future value of options this week. They could be particularly useful in Week 10, when alternatives may be more limited.

This is probably the best spot for the Raiders in terms of win odds all year, as they host Houston and are favored by seven points. After this, the schedule gets a lot tougher, and the Raiders may not be favored by more than a field goal (barring injury adjustments) for the rest of the year.

From a future value perspective, the savings are there if you can get through with Las Vegas.

The Raiders are currently a little less popular than New England, and they also have slightly lower win odds in the betting market. The choice between those two is interesting, and it depends on whether you believe both will win. Philosophically, they are similar picks.

The Cowboys could have QB Dak Prescott back this week when they face Detroit at home. They’re currently favored by seven points.

However, Dallas has more future value than other Week 7 options. It gets the Bears next week, faces the Giants at home in a tough Week 12 Thanksgiving schedule week and also plays Houston at home in Week 14.

Given the Cowboys’ somewhat higher popularity and modest EV, saving them is probably the best move unless the market moves significantly upward in win odds.

The Bengals have been used somewhat heavily this year, but they still have 6% popularity against Atlanta at home. They are a somewhat riskier option than the other popular choices, which makes for a solid but unspectacular EV.

The Bengals also do have some future value, particularly in Week 9 at home against Carolina.

For the year, teams with 5% or higher public popularity in survivor pools are 19-15-1. Only about 54% of teams generally picked in survivor pools have won (and these teams often have win odds of 70% or more in the betting markets).

Here is a summary of the most popular picks for Week 6, and the results:

Based on our public pick data, about 46% of the public survived Week 6, while 54% got eliminated. Tampa Bay was by far the biggest public loss, followed by Green Bay, San Francisco, and Baltimore.

Our picks ended up with very similar results overall, though the distribution was different. About 45% of PoolGenius entries got through, while 55% were eliminated. Green Bay was our most frequent recommendation and costliest loss, followed by Tampa Bay, plus some on San Francisco and Arizona (and less than 0.5% on Cleveland).

It was a bad week for both our entries and the public in general, with several pools decimated.

After six weeks, about 4% of all public entries are still alive (assuming no strikes and standard rules). Pools that started with 50 entries or fewer could be over or down to just a handful of remaining entries.

About 14% of PoolGenius subscriber entries are still alive. That still leaves our subscriber base advancing about 3.5 times more often so far than the public. But the total number of entries still in play went down a lot in Week 6.

It’s trending to where fewer than one in 1000 entries should make it to the end of a full 18-week season. Pools that typically last longer may end early this year.