With Arizona as the most popular public pick this week, we dive into the 2021 Circa Survivor Contest and strategy. 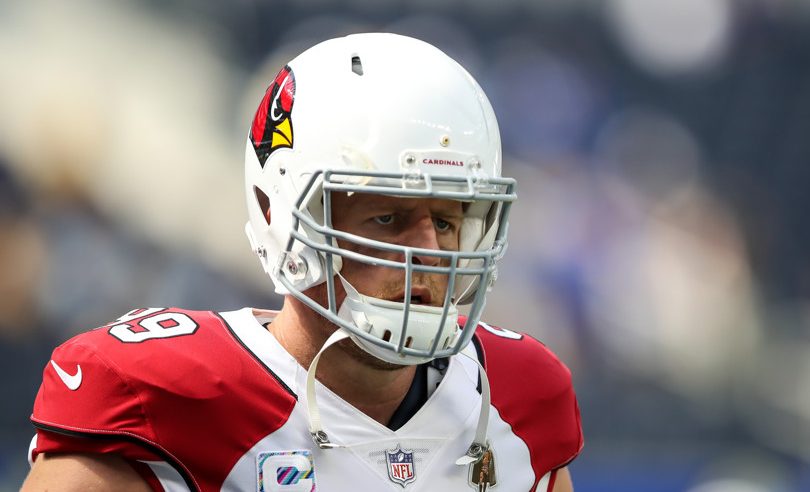 Do you think J.J. Watt is happy to be out of Houston? (Jevone Moore/Icon Sportswire)

Currently, no other teams have more than 2% pick popularity so far.

Let’s quickly go through each of these options as we start the week.

The Cardinals are the most popular pick, but they still have one of the highest EVs thanks to having win odds of 92 percent. They are favored by 18 points and are matching Buffalo from Week 4 for the highest win odds of the year (both against Houston).

The Cardinals also have pretty good future value. They are an option in Week 10, will likely have a high EV in Week 15 against Detroit, and also are one of the top options in Week 16 against Indianapolis at home.

With that said, Arizona has lower future value than the Rams and Bucs, the two other teams with high win odds this week. As a result, it may be worth trading in some future value for a very high chance of moving on to Week 8.

The Packers are part of a trio, along with the Patriots and Rams, as alternatives to Arizona. They fall in between those teams in win odds and future value.

Green Bay has win odds of 76 percent. That’s pretty solid in a vacuum, and it’s the highest we project for the Packers until Week 14 (also 76 percent, versus Chicago).

The issue is that 60 percent of pools are on two teams with high win odds, so Green Bay’s EV (0.92) is lower than you would typically like for a team with some future value.

The Patriots are favored by seven points and have 72 percent win odds. However, they have some of the same issues as Green Bay as a pick.

Considering their future value, those win odds would make them a decent option in a typical week. But with such heavy favorites this week (including two at lower popularity), the Pats have a relatively poor EV.

It could make sense to use New England in multiple-pick pools where you want to save future value and have both the Rams and Cardinals for weeks where you must make two picks. The Pats could be a diversity option for the back end of portfolios, too.

The Rams are favored by 15 points and have 87 percent win odds. That would make them the safest option on the board in most weeks, but not this week.

The Rams are tied with the Bucs for the highest EV (1.08), and they’re just above Arizona in that category. They’re also right between the two other high-survival options in terms of future value.

Using the Rams this week is a reasonable option, though they do have future value in the near term, including next week in another good spot against Houston.

The Bucs aren’t particularly popular. They have a pretty good EV (1.08), but it isn’t any better than the Rams and Cardinals. They also have more future value, which makes them a little less attractive than those two given the future value trade-off.

The Bucs are good to use now, but they’re better to save for upcoming weeks.

Week 6 was mostly one for the big favorites to roll. The two most popular picks (Rams and Colts) won easily. The Chiefs were the third-most popular pick, and after trailing at halftime, they rolled to a win in the second half.

For the second straight week, about 97 percent of the public advanced. There was no big single elimination result for the public, with the Bills, Dolphins, and Broncos’ losses contributing most of those eliminations.

For the second week in a row, the Las Vegas Raiders were responsible for eliminating a portion of our portfolio recommendations in some pool types. They did so by losing last week, and they did so by winning at Denver this week.

Our 91 percent survival rate was below the public. On the other hand, those who advanced again managed real future value savings.

Our recommendations almost entirely avoided the Rams, who are the third-most valuable team behind Buffalo and Tampa Bay. That comes into play both this week and next week.

This week features three different teams favored by at least 12 points and another team that is nearly a 10-point favorite. That isn’t completely unheard of—it just happened last year in Week 15—but it also isn’t particularly common.

When you do get several larger favorites, it usually tends to be later in the year when injuries have ravaged teams and some are playing a third-string QB.

Given that it’s coming fairly early this year, and the the heavy favorites also have a fair amount of future value, it’s created some interesting dynamics.