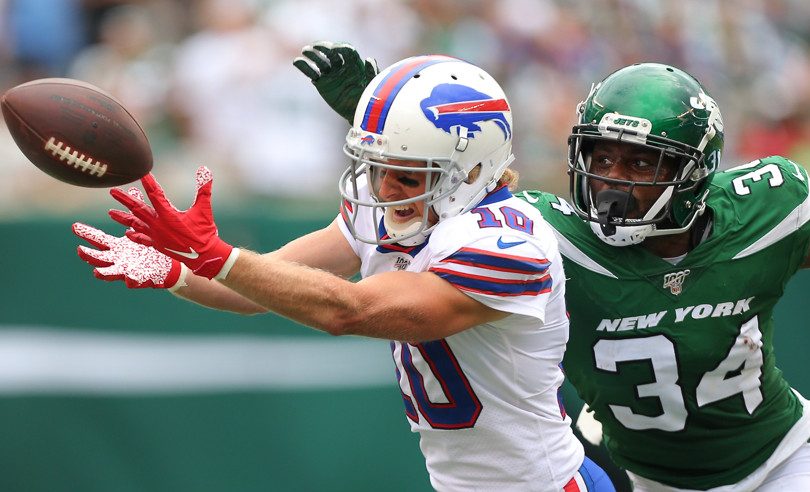 The New York Jets continue to sink to further depths of awfulness, making them a popular team to pick against in NFL survivor pools this year.

Last week, the Jets lost 24-0 to the Dolphins and were never competitive. This week, the Buffalo Bills are up, and it’s no surprise that Buffalo is a tremendously popular survivor pick as a result.

The public was heavily on the Dolphins and Patriots last week, with both teams favored by less than 10 points. Our subscriber recommendations largely avoided those two teams, in favor of other teams that had been saved by our customers at higher rates than the public in recent weeks.

While the Dolphins won easily, the Patriots lost at home to Denver. Meanwhile, the Colts rallied to win, Baltimore held off Philadelphia, the Titans rallied, and only the Vikings lost among the alternative options we recommended to subscribers.

Here were the most frequent picks by the public and our recommendations for last week.

Overall, our picks survived the week 82% of the time while the public advanced 71% of the time. So it was a great week for our subscriber base overall relative to the public, largely thanks to the Patriots’ loss.

Below, we break down the public’s five favorite survivor picks this week, evaluating the pros and cons of each pick. You’re probably thinking about picking at least one of these teams, but remember there are also other options to consider in Week 7, and highly contrarian picks can sometimes provide a solid boost to win your pool.

(At the end of the post, we’ll tell you how to get our Week 7 survivor pick recommendations, customized for your pool’s size, rules, and the teams you’ve already picked.)

The Buffalo Bills draw the New York Jets for the second time this year. Buffalo was the first to start off against the dysfunctional Jets in Week 1 at home, and New York has only played worse since that game.

Sam Darnold’s status for this game hadn’t been confirmed yet at post time, and his final status could impact Buffalo’s win odds, at least slightly. The Jets have scored only 10 total points in the two games started by Joe Flacco so far, versus 16 points per game with Darnold at QB.

It’s understandable that Buffalo is the most popular choice this week, as they are the largest favorite, and New York has looked like the worst team in the league even before Darnold was out. Plus, Buffalo’s schedule gets significantly tougher after this week. We only project the Bills with above 60% win odds in two other weeks, and one of those is the final week of the season, which is prone to uncertainty due to potentially resting starters.

Usually a team with Buffalo’s sky-high pick popularity is a prime “fade” opportunity, but that’s not the obvious route this week given their profile. The Bills are worth consideration in some types of pools, but in some non-standard formats that are more forgiving (e.g. strike pools), you probably will get better expected value if you look elsewhere and hope for a big upset in this game.

The Chargers come off their bye week and get Jacksonville at home. The Jaguars, who started the season with an upset win over the Colts and then took the Titans down to the wire in Week 2, have since reverted to expected form; the Jacksonville defense has allowed 30+ points in five straight games.

Los Angeles, meanwhile, has come up just short against good competition recently, with narrow losses to Kansas City, Tampa Bay, and New Orleans. Now, the LAC schedule gets better this week. The Chargers are a viable choice here depending on your pool format. They are a tier below the Bills as a choice when it comes to safety, but that’s offset to some degree because of the much lower pick popularity.

The Saints are another team coming off a bye week, to draw a survivor-relevant matchup. The Saints should have star WR Michael Thomas back. They get a Carolina team that has been playing better, but is coming off a home loss to Chicago.

The Saints are in the same tier of safety as the Chargers, and have similar popularity as Los Angeles as well, so they are roughly similar in expected value this week. As far as future value, the Saints do not have any clear cut future weeks where they project as a great survivor pick, but they should be favored in most weeks going forward. As a result, any shifts in opponent quality (e.g. on account of injuries) could make them a viable play at some point during the second half of the season.

Playing at Denver, the Kansas City Chiefs are the second largest favorite of the week behind Buffalo. KC has roughly the same pick popularity as the Chargers and Saints, with slightly higher win odds.

Of course, that immediate value is countered by Kansas City having great future value. The Chiefs are just a week away from playing the Jets at home, when they will be the largest favorite so far this year and could have win odds over 90%. They then get Carolina in Week 9 at home, and should be a large favorite that week as well.

So if you’ve made it this far, there might be even more value in holding Kansas City if you have other reasonable options this week.

The Eagles are the fifth-most popular survivor pick of Week 7, playing in the Thursday Night game. The Eagles will be without RB Miles Sanders in this one, and are a tier below the Chargers/Saints in safety this week.

The reason the Eagles could be an attractive survivor pick is that they have basically no future value. Next week they play Dallas at home, but that game features our highest projected win odds for Philadelphia before Week 17 (in which they likely still won’t be a big favorite).

So the argument for using Philadelphia depends on just how risky you want to get to save future value and avoid Buffalo this week. There’s a 20% safety drop-off, though, between the most popular choice of Buffalo and taking the Eagles, so unless you’ve got a portfolio of entries to spread out across several teams, it would be a big risk.

Get Our Week 7 Survivor Pick For Your Pool

To recap, we are not saying that the first team listed above, the Buffalo Bills, is the best Week 7 survivor pick for your specific pool(s). We’re telling you that the Bills are the most popular Week 7 survivor pick in pools nationwide, while the Chargers, Saints, Chiefs, and Eagles are the public’s next most preferred plays.

About 91% of survivor entries this week are picking one of those five teams. Should you join them? Maybe, maybe not.

The best Week 7 pick for your NFL survivor pool depends on a variety of important factors, including the number of entries still surviving in your pool and its rules. It takes a lot of data and math to figure out which pick (or combination of picks, if you’re playing multiple entries) gives the biggest boost to your expected survivor pool winnings.

To get our specific Week 7 pick recommendations, hop over to our NFL Survivor Picks product (link below), tell us a few details about your survivor pool(s) and the teams you’ve picked so far, and you’ll see the picks we recommend for each of your entries.