Week 6 of the 2022 NFL season in survivor pools has a couple of popular options, starting with the Rams against the Panthers. 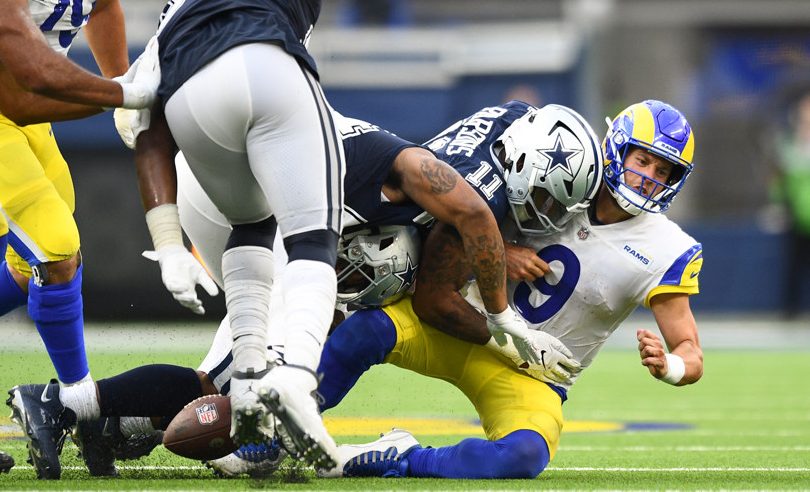 Can Matthew Stafford and the Rams survive against the struggling Panthers? (Brian Rothmuller/Icon Sportswire)

Week 6 is here in NFL survivor pools after another upset-filled Sunday. Last week it was Jacksonville and Green Bay who took out survivor entries. Who will it be this week?

We plan to periodically update this post until Sunday of Week 6 arrives, and we will also be posting video updates throughout the week as well, so check our articles section for those. Here’s what’s available now:

Here are the most popular teams early on for Week 6 of the 2022 NFL season:

The Rams are currently the biggest favorite of the week against the Carolina Panthers. The 1-4 Panthers just fired head coach Matt Rhule and tapped defensive coordinator Steve Wilks as their interim head coach. Quarterback Baker Mayfield is also out with an ankle injury, although it’s not clear how much of a negative that is. The Panthers were 31st in net yards per pass attempt with Mayfield under center.

The Rams haven’t been very good on offense either. They just lost at home to Dallas to fall to 2-3. They are 29th in points scored and 26th in total yards, so while they are favored by 10.5 points, they are not as safe as, say, Buffalo was last week.

The Rams were also the most popular pick back in Week 2 when they held on to beat Atlanta by four points. Most entries do still have them available, but that earlier week of usage could limit how popular they become.

As far as future value, the Rams’ faltering performances have reduced their season outlook. (This week was part of their previously higher future value.) Right now, we project them to have win odds above 70% in only one other week (Seattle, Week 13). So while they will have some future value, primarily driven by that week, they don’t have a lot of it.

The Bucs are rising in popularity, facing a Pittsburgh team that is coming off a 35-point loss to Buffalo in QB Kenny Pickett’s first start. They are the second-biggest favorite of the week at 8.5 points.

However, the Bucs do have the highest future value of any of this week’s popular options. They had decent popularity last week, and if they win this week, they likely will have been used by well over half of all entries going forward.

Meanwhile, they have several potential value spots going forward. In Week 10, we project them as tied for the largest favorite when they play Seattle, in a week where the only other teams we project with greater than 66% win odds are Buffalo, Kansas City, and Philadelphia.

Given their higher popularity (and lower win odds relative to the Rams), they also have only moderate EV this week.

The Packers took a hit last week with their loss to the New York Giants in London. They return home and now get the other New York team, the Jets. The Jets are coming off a big win, although Miami unexpectedly had to go to a rookie third-string QB on the first possession of the game.

The Packers’ win odds have dropped a bit from earlier projections, but they are still favored by seven points, the third-largest favorite of the week, with 74% win odds. Meanwhile, their popularity is also down, so they have a decent EV as Tampa Bay and the Rams rise in popularity.

As far as future value, the Packers have gone down both because of their recent performance along with this week making up a decent portion of it. They could be a contrarian option in Week 9 (at Detroit), but the only other week we currently project them to have higher win odds than now is in Week 18 when they host Detroit.

The 49ers are favored by 5.5 points as they travel to Atlanta to complete their NFC South two-week swing (win over Carolina last week). They have modest EV because of that higher risk right now. Where it ends up could depend on if the public continues to move toward the Rams and Bucs.

As far as future value, the 49ers have a decent amount, but they are not among the top five teams. Most of their upcoming future value comes late, so their usage could depend on pool size. They look like potentially valuable options in Weeks 15 and 16 (Seattle and Washington).

The Chargers are a five-point favorite hosting Denver and a somewhat popular choice given their risk profile. Our models are also down on the Chargers this week, which gives them the lowest EV of the top five options in popularity.

The Chargers have moderate future value, although they do play Seattle at home next week in a game where they should be a larger favorite.

Week 5 presented some interesting decisions. The Bills were a huge favorite, and they rolled to an easy win over Pittsburgh. Tampa Bay was also the second-biggest favorite, and although the game got interesting late, it led the entire way.

Both of those teams have higher value for future weeks. Which other teams got through was going to make or break the week.

Here is a summary of the most popular picks for Week 5, and the results:

Based on our public pick data, about 78% of the public survived Week 5, while 22% got eliminated. Jacksonville was the biggest public loss, followed by Green Bay.

The week went about as well as possible, with the top four picks all advancing, while saving Buffalo in doing so. As a result, 98% of our pick recommendations advanced in Week 5, with nearly all the eliminations coming on Jacksonville.

After five weeks, about 9% of all public entries are still alive (assuming no strikes and standard rules).

Meanwhile, about 32% of PoolGenius subscriber entries are still alive. That now puts our subscriber base as a whole as advancing about 3.5 times more often so far than the public.

In addition, our subscribers should have a significant future value advantage against the average public entry, having used Buffalo, Green Bay, Tampa Bay, the Rams, and Baltimore at a much lower rate than the public.