The Miami Dolphins, who haven't been favored to win since 2018, are the most popular Week 6 NFL survivor pick. But are they a smart pick? 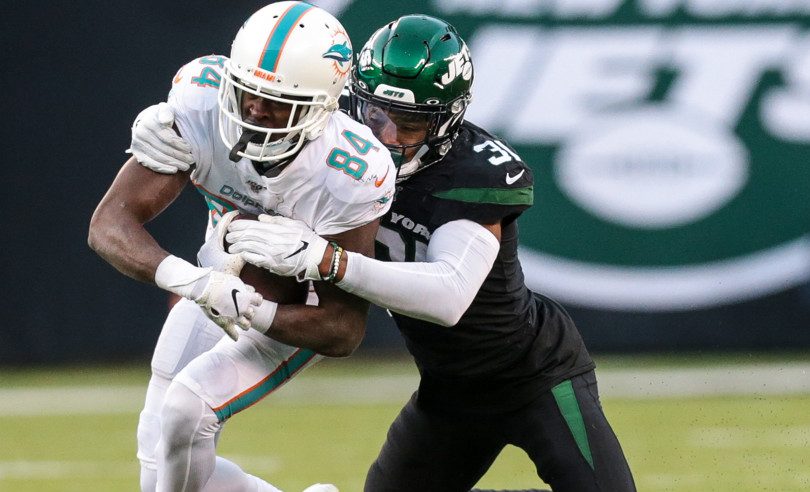 Week 6 in NFL survivor pools brings us a new face as the most popular pick.

The surging Miami Dolphins are favored to win a game for the first time in nearly two years, as a schedule change moved their matchup with the woeful Jets up to Week 6.  In fact, the two most popular survivor picks this week are in games that weren’t even on the Week 6 schedule a week ago. (FYI, we wrote an article about how the NFL schedule changes could impact survivor pools.)

For the second week in a row, recommending San Francisco to our subscribers as a high expected value play to diversify away from the most popular choice burned us. Another high EV pick for the public, Kansas City, also suffered its first loss since last November. The biggest chunk of the public, meanwhile, survived a very close call with Dallas prevailing in a game that came down to a last-second field goal.

Here were the public’s picks and our subscriber pick recommendations for Week 5, for all teams that were being selected by at least 2% in either group:

As a result of the 49ers’ collapse, our subscriber recommendations survived 56% of the time in Week 5, with most of the advancing entries using New Orleans or Houston. That compared to a 79% survival rate for the public, which advanced most commonly with Dallas, Baltimore, and Seattle.

Below, we break down the public’s five favorite survivor picks this week, evaluating the pros and cons of each pick. You’re probably thinking about picking at least one of these teams, but remember there are also more options to consider in Week 6, and highly contrarian picks can sometimes provide a solid boost to win your pool.

(At the end of the post, we’ll tell you how to get our Week 6 survivor pick recommendations, customized for your pool’s size, rules, and the teams you’ve already picked.)

The transformation is complete. Miami has gone from one of the most frequent teams to pick against in survivor pools, to suddenly the most popular pick in Week 6. (That’s also a reflection of how poorly the New York Jets have been playing in 2020, of course.)

Miami is coming off a blowout win in San Francisco, while the Jets lost yet again by double digits to drop to 0-5. Perhaps the single most impressive thing about the Jets’ season so far is that head coach Adam Gase has lasted longer in his job than two other NFL head coaches, Bill O’Brien of Houston and Dan Quinn of Atlanta.

Miami is part of a group of four teams who have similar safety profiles based on objective win odds. They are by far the most popular choice this week because (a) compared to the other options, they have not been used yet by almost anybody, and (b) they currently have little future value after this week, unless the Dolphins end up proving to be a top-tier team this year.

So a decision on Miami likely comes down to your other options, and whether it makes sense to stay with the crowd or play for the upset and a big chunk of your pool taking the loss if the Dolphins lose. With 41% Miami pick popularity and other similarly safe teams this week, it deserves careful consideration.

The New England-Denver game was also pushed back from Week 5, when the Patriots were getting about 8% of early picks in survivor pools a week ago. Now, they are the second-most popular choice.

That spike in pick popularity is likely due to two factors. Week 6 has far fewer survivor pick options with decent safety profiles, and further, QB Cam Newton is more likely to play than he was a week ago.

The Patriots have decent future value, and have risen to fifth in our future value estimates. Deciding on New England may depend on which teams you have available in future weeks, as the Patriots are a particularly attractive option in a sparse Week 9 when they play the Jets.

Getting Cincinnati at home, Indianapolis is currently a slightly riskier pick than New England or Miami, but the Colts have much lower pick popularity.

The Colts also have less future value than the Patriots, and after this week, we do not project Indy to have win odds above 60% until Week 15.

Of course, the reason why Indianapolis is being used less frequently is because of availability. They were the most popular survivor pick in Week 3 when they played the Jets, in a week where a good chunk of survivor entries were eliminated. So a majority of still-alive entries have already used Indianapolis.

As is often the case with Baltimore this year, deciding when to use them is a matter of choosing their present value over their future value.

With similar win odds to the other three options above them in popularity this week, the Ravens have good expected value. That means they can serve as a decent contrarian option to Miami, at no greater risk.

The optimal decision on Baltimore, as a result, may come down to how many entries are left in your pool and how deep you expect to have to go to win it. Baltimore faces the toughest part of their schedule over the next six weeks and may be attractive to use in smaller pools, if your pool is not likely to last past Week 12.

In larger pools, Baltimore has a lot of future value in later weeks when we project them with 85%+ win odds in several weeks starting at Week 13.

After the top four safest options, there is a sizable (10% or more) drop-off in win odds according to the betting market. So if you are considering a longer-shot type team this week, you want to try to find one with very low pick popularity and no future value. Minnesota mostly fits the bill on those counts, when they host Atlanta.

The 1-4 Vikings do have modest future value. Their highest remaining win odds projection comes in Week 13 against Jacksonville at home, but that’s also a week in which we project six other teams with a similar or higher chance of winning. So there should be options.

For Minnesota, it just comes down to whether a big step up in risk is worth the potential reward this week.

Get Our Week 6 Survivor Pick For Your Pool

To recap, we are not saying that the first team listed above, the Miami Dolphins, is the best Week 6 survivor pick for your specific pool(s). We’re telling you that the Dolphins are the most popular Week 6 survivor pick in pools nationwide, while the Patriots, Colts, Ravens, and Vikings are the public’s next most preferred plays.

About 87% of survivor entries this week are picking one of those five teams. Should you join them? Maybe, maybe not.

The best Week 6 pick for your NFL survivor pool depends on a variety of important factors, including the number of entries still surviving in your pool and its rules. It takes a lot of data and math to figure out which pick (or combination of picks, if you’re playing multiple entries) gives the biggest boost to your expected survivor pool winnings.

To get our specific Week 6 pick recommendations, hop over to our NFL Survivor Picks product (link below), tell us a few details about your survivor pool(s) and the teams you’ve picked so far, and you’ll see the picks we recommend for each of your entries.