Week 5 of the 2022 NFL season in survivor pools is one where the Buffalo Bills will be popular. But should you save them? 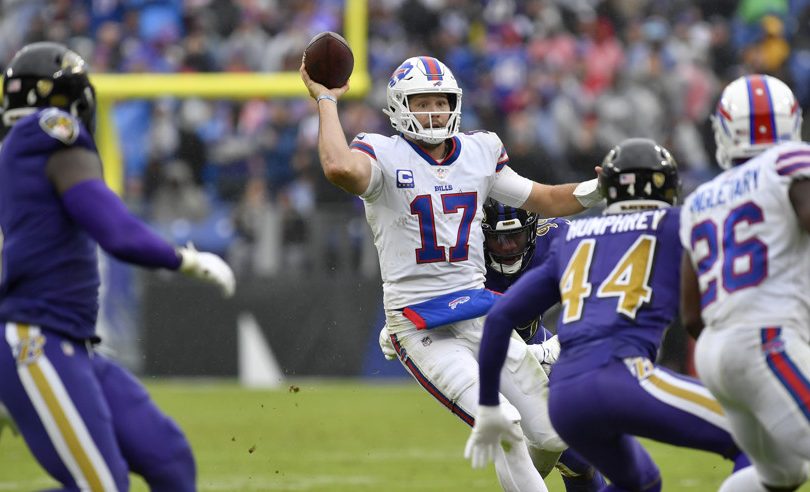 Welcome to the 2022 Survivor Season, Josh Allen and the Bills (Randy Litzinger/Icon Sportswire)

Week 5 is here in NFL survivor pools. After a starting schedule that included the Rams, Titans, Dolphins, and Ravens, the Buffalo Bills have finally made their first appearance as a true survivor option, something that will become a regular occurrence over the rest of the season.

We plan to periodically update this post until Sunday of Week 5 arrives, and we will also be posting video updates throughout the week as well, so check our articles section for those. Here’s what’s available now:

Here are the most popular teams early on for Week 5 of the 2022 NFL season:

The Bills are a 14-point favorite against the Pittsburgh Steelers in Week 5, which makes them the largest favorite of the year so far. Their high win odds (87%) are going to make them an attractive option this week.

Of course, the trade-off with Buffalo is future value. We currently project the Bills as the biggest favorite in five future weeks, starting in Week 9. If at least a third of pool entries are using them this week, that means they could be less popular and higher-value plays in some of those upcoming weeks.

The trade-off of using the Bills now versus saving them falls may depend on how large your pool is and how deep into the season you need to go (and if you have multiple pick weeks later in the year).

Tampa Bay is the second-biggest favorite, at -8.5 against Atlanta. The Bucs do have reasonably high popularity (18%) for a second choice. Given Buffalo’s relative win odds and reduced chances of losing, Tampa Bay only has a solid-but-not-great EV this week.

The Bucs also have decent future value, although this does look like one of the best spots to use them from a safety perspective.

Jacksonville has relatively low future value and is favored by a touchdown this week against Houston. Those factors have pushed the Jaguars up in popularity. (They are coming in around 13% right now.)

That popularity reduces their EV, as they are more popular than several other teams with similar (or better) win odds. That makes the Jags a relative lower-value play now.

However, they could help you save lots of value if they get through in a week where the best team to save, Buffalo, will be heavily used.

Like Jacksonville, the Vikings are favored by a touchdown this week when they face the Bears at home.

So far, there have been only five cases where a team played the week after a London game, and those teams are 2-2-1 against the spread. There isn’t a noticeable trend in that admittedly small sample size.

The Vikings are currently below Jacksonville in popularity, so they have a little better EV than the Jaguars. They do have a little more future value, but that is marginal.

The drop-off from the top eight teams in future value to everyone else is fairly large right now, and the Vikings are not among those highest-value options going forward.

The Packers, as we noted last week, are third in our future value rankings, after they were extremely popular. Only the Bills and Eagles are more valuable to have going forward.

The Packers do have lower popularity and slightly higher win odds than some other options this week, as they are favored by eight points against the Giants in the London game. This is one to keep an eye on, because we currently don’t know the status of Giants QB Daniel Jones after he suffered an ankle injury last week. The odds could shift if he is ruled out.

Short of that shift, the Packers’ EV is solid but not spectacular, particularly when they project as a bigger favorite next week at home against the Jets. No team next week is likely to be favored by as much as the Bills are now.

Week 4 featured a really popular team in Green Bay and lots of alternative options that carried a little more risk. In the end, the Packers held on, but it wasn’t easy against a New England team that was down to third-string rookie QB Bailey Zappe by the end of the game.

Here is a summary of the most popular picks for Week 4, and the results:

Based on our public pick data, about 85% of the public survived Week 4, while 15% got eliminated, with Detroit and Pittsburgh being the two biggest losses.

Meanwhile, our picks almost entirely avoided the Packers. We focused on the Chargers, Bengals, Colts, plus some Vikings (on Sunday morning) and Eagles. With the Colts loss (plus a few entries on Pittsburgh) about 74% of our recommendations got through the week, and 26% were eliminated or took a loss.

After four weeks, about 12% of all public entries are still alive (assuming no strikes and standard rules).

Meanwhile, about 32% of PoolGenius subscriber entries are still alive. That now puts our subscriber base as a whole at a little less than three times the public survival rate.

In addition, our subscribers should have more future value available on their entries on average compared to the public, especially after a week where over half of the advancing public entries used Green Bay.