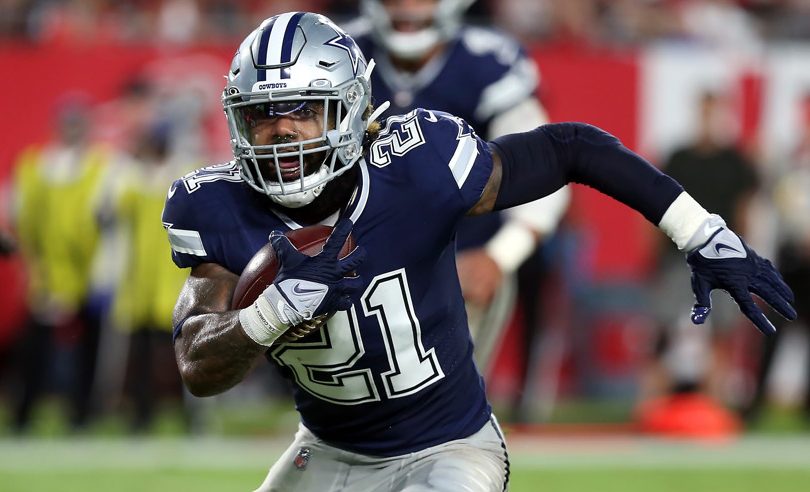 We add to this post every day until the Sunday kickoffs, so check back for updates.

Unlike some recent weeks, there is no clear-cut public favorite this week, as four different teams have similar pick rates at the top. Any could end up reasonably being the most popular pick in your pool. They each have different factors in their favor, so let’s go through the top options.

The Bucs (-10.5) are the largest favorite of the week and thus have the highest EV. However, that EV is at 1.07, so it isn’t significantly higher than some of the other options.

They also have the highest future value of the choices in this group by far. That means their usage might depend on your pool size and rules.

In a smaller pool, the Bucs are a pretty good pick. In a larger one, there will probably be three to four other weeks later on where they have even higher value.

The Cowboys slightly lower win odds (74%) than Tampa Bay (80%) and New England (77%) right now, which puts their EV (0.97) below those options. They also have moderate future value, especially as an option on Thanksgiving week, when there is no clear top choice as it stands now.

If you think their popularity will be reduced in your pool, they could still be a good pick. But at the current numbers, their expected value is not high enough compared to some other options.

The Patriots are the second-largest favorite of the week right now (-9.0) and have a pretty good EV, coming in just below Tampa Bay. They are a solid option this week unless the popularity climbs. (It could do so if the public data reflects some pre-set picks, as Houston looked terrible Sunday).

The Patriots have moderate future value, as they are also an option in Week 7 (vs. the Jets) and in larger pools in Week 17 (vs. Jacksonville).

Minnesota also comes in below New England and Tampa Bay in win odds. Our models are even further down on the Vikings than the betting market. We give Minnesota a 70% chance of winning, while the betting odds are at 75%.

However, the Vikings have the lowest future value of this group. In a larger pool, strike pool, or multi-pick pool, going with them may make sense for that reason.

As it stands right now, Minnesota’s next-highest win odds are in Week 18, the final regular-season week. That week is relatively harder to predict given team motivations and the potential for resting players.

The Ravens are a viable alternative to the top four choices. They have decent win odds (74%) and are less popular than options like Dallas and Minnesota.

You do give up a fair amount of future value here, though. The Ravens currently rank seventh in our future-value projections for a 100-entry pool.

They have multiple future weeks where they are a decent alternative to the most popular choice if you don’t want to use them now against the Colts.

Week 4 gave us a pair of overtime games, and both resulted in some survivor eliminations.

Both the New York Giants and New York Jets got their first win of the year in upset fashion. One was generally better for our recommendations than the other.

Here were the top five elimination results for Week 4.

About 30% of an average pool was eliminated, primarily with the Saints and Titans losing. Our recommendations mostly avoided the Titans but were heavier than the public on the Saints.

New Orleans blowing a 21-10 fourth-quarter lead was not fun. About 24% of our recommendations lost, almost all on the Saints.

On balance, it was a slightly positive week for our subscriber base. A slightly higher percentage advanced than the public thanks to being much lower on Tennessee. They also used a little less future value by being relatively heavier on Cincinnati and lighter on Buffalo than the public.

For a team with other key injuries, it’s a significant blow.