Over 70% of Week 4 survivor picks nationwide are going on the LA Rams or the Baltimore Ravens. Should you join them, or fade the crowd? 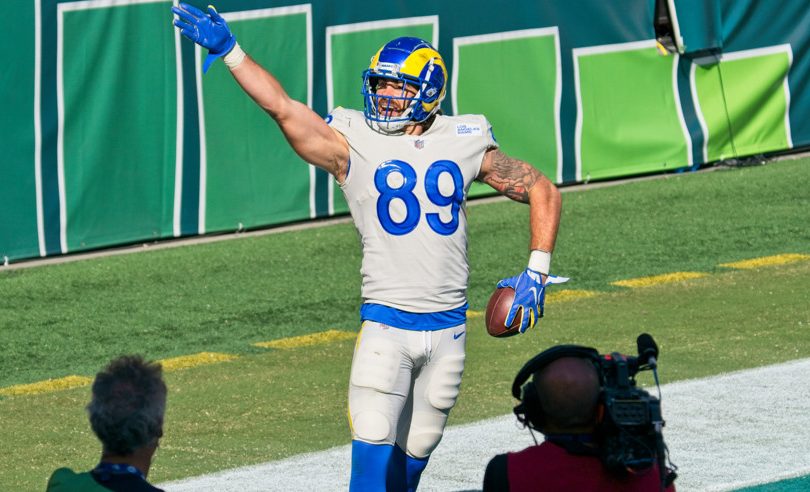 Tyler Higbee, picks up the yards in a field where the game has been, lives in a dream (Photo by Andy Lewis/Icon Sportswire)

NFL Week 4 presents the two largest favorites of the season so far, who combined are drawing more than 70% of survivor pool picks nationwide, as well as some interesting alternative choices. By now, we’re starting to get a little more clarity on which teams might be surprises or disappointments this season, and which ones are expected to be among the worst in the league.

In terms of our recommended picks to our premium NFL Survivor Picks subscribers, last week worked out about as well as we could have hoped. Our top three recommendations were on the Browns, the Patriots, and the popular Colts, though we recommended Indianapolis at a much lower rate than the public was picking them. All three of those choices won by double digits.

Meanwhile, our subscriber pick recommendations largely avoided the public’s next two most popular picks; Arizona and the LA Chargers were the two options the public went with most frequently if they did not take the Colts, and both of those teams lost. Those two results combined to eliminate almost 20% of the public and made up only 1.4% of our recommendations.

In total, the Week 3 public elimination rate was around 28%, compared to only 11% for TR subscriber picks. Here is a summary of all picks that had at least 2% popularity with either the public or our recommendations:

Overall for the season, about 42% of public entries have survived to Week 4, compared to a 52% survival rate for TR subscriber picks. That’s a nice +25% difference in survival rate.

The future value saved for our subscribers is also higher, as our first three weeks of recommendations have featured good teams like the Ravens, Packers, and Chiefs far less often than the public has picked them so far. That provides an advantage in future weeks.

Below, we’ll break down the public’s five favorite survivor picks this week, evaluating the pros and cons of each pick. You’re probably thinking about picking at least one of these teams, but remember there are also more options to consider in Week 4, and highly contrarian picks can sometimes provide a solid boost to win your pool.

(At the end of the post, we’ll tell you how to get our Week 4 survivor pick recommendations, customized for your pool’s size, rules, and the teams you’ve already picked.)

In the first clear spot to use the Rams in 2020, the public is going in on Los Angeles in a heavy way. The Rams have 52% pick popularity so far, and are tied with the Ravens for the largest point spread of the week (and the season so far).

Those going with the Rams instead of Baltimore are likely seeking to preserve Baltimore’s much greater future value, while still staying with a team that is much safer than all other options this week.

The Rams, though, have seen their future value increase in recent weeks — not only through their own good play, but because of some future opponents’ poor play. They now look like a viable value option (especially with so many players picking them this week) in Week 5 when they travel to Washington. For those in bigger pools where later weeks likely will matter, LAR also draws the Jets at home in Week 15.

The choice with the Rams comes down to this: do you want to follow the crowd, opting for immediate term safety while still saving Baltimore for later? Or do you want to go elsewhere in the event that the Rams get upset and knock out around half of your pool, if your pool reflects national survivor picking trends?

Baltimore has the highest expected value this week, based on their high win odds combined with only moderate popularity for a team favored by a whopping 13 points.

That high expected value, though, will be the case with the Ravens in several weeks going forward this season. About 20% of the surviving public has already used Baltimore as a survivor pick in a past week, and after this week, provided the Ravens win and depending on other eliminations, that number could be close to or exceed 50%.

What that means is that Baltimore’s future value should only continue to climb after Week 4, as fewer and fewer of your opponents’ entries will be able to use them. There are five other weeks where we currently project the Ravens with win odds of 80% or higher, including next week.

On balance, Baltimore looks like a reasonable choice this week, but whether they are the best choice depends on your specific situation, rules, and number of other remaining entries.

Seattle, traveling to Miami, is part of the next tier of safety behind Baltimore and the Rams this week — though it must be noted that dropping from a 13-point favorite to a 6.5-point favorite gives them 13-14% lower win odds, which is a big difference.

The Seahawks have more future value than most of the non-Rams / non-Ravens choices, though, and that future value also depends on how large your pool is and how deep into the season you expect it to go.

Seattle’s Week 5 home matchup against the 0-3 Vikings suddenly looks like a much better option than anticipated before the season. Then toward the end of the season, in Weeks 13-15, Seattle gets the New York Giants, the New York Jets, and Washington in three straight weeks. Those matchups look even better than they did when the season began, as the two New York teams have been among the worst in the NFL so far.

So the choice on Seattle comes down in large part to whether their potential contrarian value later in the schedule could be a big plus in your pool.

Tampa Bay returns home to face the Chargers, and the Bucs’ defense has turned in a couple of top performances in recent weeks. The Bucs also are in the same safety tier as Seattle, behind the two most popular choices.

Tampa Bay does come at a relative popularity discount to Seattle, being picked only about half as often. They also have a little lower future value; currently, Tampa Bay does not project as a clear top value survivor pick in any future week, although they do have several future weeks where they should be the betting favorite.

Take note that the Bucs’ best remaining matchup in terms of projected win odds is on the road in Week 8, when they play at the Giants. That’s a fairly important week, especially if you have already used Kansas City, who play the Jets in Week 8 and could be favored by over 20 points.

We are going to just give it to you straight on this one: the Cowboys are not a great survivor option in Week 4. While 3% isn’t a high popularity figure for one of the five most popular picks of the week, it’s still too high relative to their win odds, especially given the dynamics of Week 4.

The two most popular choices this week are favored by 13 points, and dropping down to Dallas (favored by only 4 points) is a very big risk to take when the average expected survival rate for Week 4, based on public picking trends and team win odds, is over 80%.

If you want to play contrarian and avoid the two most popular teams, or if you want to round out a portfolio of survivor picks with some contrarian choices after putting some entries on the Rams and/or Ravens, there are other options that make more sense from a relative safety and/or popularity perspective.

Get Our Week 4 Survivor Pick For Your Pool

To recap, we are not saying that the first team listed above, the LA Rams, is the best Week 4 survivor pick for your specific pool(s). We’re telling you that the Rams are the most popular Week 4 survivor pick in pools nationwide, while the Ravens, Seahawks, Bucs, and Cowboys are the public’s next most preferred plays. Almost 90% of survivor entries this week are picking one of those five teams.

Should you join them? Maybe, maybe not. The best Week 4 pick for your NFL survivor pool depends on a variety of important factors, including the number of entries still surviving in your pool and its rules. It takes a lot of data and math to figure out which pick (or combination of picks, if you’re playing multiple entries) gives the biggest boost to your expected survivor pool winnings.

To get our specific Week 4 pick recommendations, hop over to our NFL Survivor Picks product (link below), tell us a few details about your survivor pool(s) and the teams you’ve picked so far, and you’ll see the picks we recommend for each of your entries.