Week 2 of the 2022 NFL season has some values available in survivor pools. Which teams should you be looking at after a wild opening week? 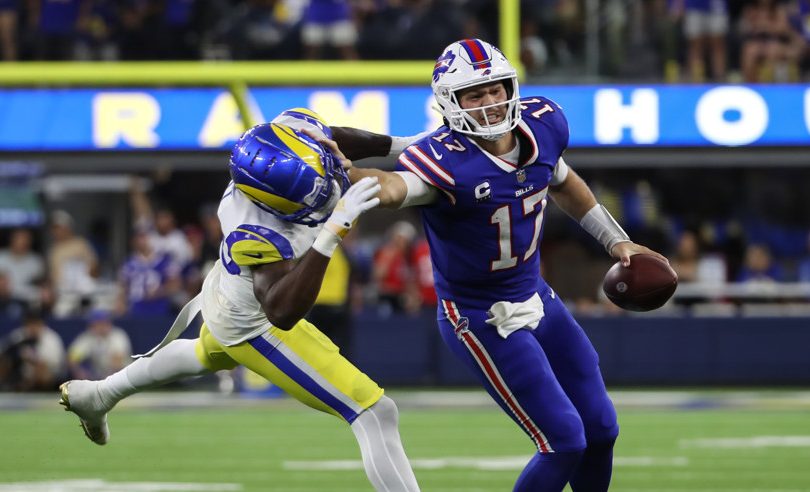 Less than half of all survivor entries made it through Week 1 of the 2022 NFL season.

The opening week was full of landmines and heartache, but survivor players that made it through now have an opportunity. Pool sizes should be substantially smaller after only one week.

We plan to periodically update this post until Sunday of Week 2 arrives, and we will also be posting video updates throughout the week as well, so check our articles section for those. Here’s what’s available now:

Here are the most popular teams early on for Week 2 of the 2022 NFL season:

In Week 2, the Rams have an opportunity to bounce back from their Thursday Night Football debacle against Buffalo. The result of that game understated how poorly they played, as some Buffalo turnovers prevented it from being an even bigger margin of defeat.

On Sunday, the Rams face the Atlanta Falcons, who have the lowest projected win total in the betting markets for the year. However, the Falcons did gain more than 400 yards in a narrow loss to the New Orleans Saints in Week 1.

The Rams are the biggest favorite of the week (-10.5), but there are four other teams favored by 9.5 or 10 points that have similar win odds and lower popularity. That gives the Rams a solid-but-unspectacular EV this week.

The Rams also have the second-highest future value of the five most popular options this week, behind only Buffalo. Week 5 looks like a suddenly viable spot to use the Rams in the near term if you save them, as they get Dallas (without Dak Prescott) that week.

Denver lost its season opener to Seattle by one point and now faces a Houston team that tied Indianapolis in Week 1. But Denver’s offense moved the ball consistently and just struggled in the red zone (two fumbles at the goal line).

Denver is the second-most popular pick right now. It’s in that large group of teams favored by 10 points, with win odds of 82% in the markets.

The Broncos have solid future value, but it isn’t prohibitively high. If you don’t use them this week, Weeks 7 (Jets) and 8 (Jaguars) look like the next-best options.

The Cleveland Browns have moved into the third position in popularity after winning their season opener at Carolina. Having the Jets as their opponent is also a factor here in the public pick rate, as New York was the one big underdog last week that did not win or play a close game.

The Jets lost 24-9 to Baltimore, although they did have 104 more yards than the Ravens.

The betting markets have Cleveland as a 6-point favorite, lower than the other popular choices this week. Because of those lower win odds, the Browns have a lower EV than other options.

What they don’t have is a lot of future value, especially in pools where the size is reduced enough that late weeks look less likely. The Browns’ win odds this week are larger than any week until the matchup with Houston in Week 13, when QB Deshaun Watson is expected back from his suspension.

The Bills are also one of the bigger favorites of the week, and they have similar win odds to the Rams and Broncos. Because their popularity is a little lower, they do have a pretty good EV.

However, that is countered by Buffalo being by far our highest future-value team for 2022. We project them to have win odds higher than this week in five different future weeks. Not all of those weeks will have as many other quality options as this one.

Finally, the Green Bay Packers move into the fifth spot. You may be getting a little recency-bias discount on this one, as the Packers offense struggled in a Week 1 loss to Minnesota. Meanwhile, Chicago beat San Francisco 19-10.

However, the Bears beat the Niners with only 204 total yards of offense. They were outgained by 127 yards. San Francisco committed two costly third-down penalties on the Bears’ first two scoring drives, which allowed Chicago to take the lead after doing nothing on offense for 2.5 quarters.

Chicago will likely need to duplicate that formula to beat Green Bay. “That formula” means getting the Packers to repeatedly shoot themselves in the foot, turn the ball over, and commit bad penalties, while the Bears get one big play to a receiver whom you thought was out of the league.

Green Bay has win odds of 79% and a pretty good EV because its popularity is lower than other options. The Packers have solid but not spectacular future value, highlighted by a Week 6 matchup with the Jets.

Last Friday, we talked in one of our new videos about the risky outlook for Week 1 and the potential for a big sweat. Sunday (and Monday) provided even more sweating for survivor players than anticipated, as nearly every survivor-worthy pick was on the ropes, and almost all of them lost in excruciating fashion.

When the dust settled, our subscriber recommendations ended up modestly beating the public despite the widespread carnage. 45% of our recommendations advanced (assuming the Colts tie eliminated entries, which is true in most but not all pool formats), compared to a 38% survivor rate for the public at large.

As a bit of a silver lining, our recommendations also advanced more entries with a slightly better future-value outlook. Over half of still-surviving entries nationwide have now used Baltimore, while our Week 1 picks leaned most heavily on New Orleans.

Here is a summary of the most popular picks for Week 1, and the results:

There were a lot of missed field goals and bad red-zone execution by the teams that lost. Five of the six most popular teams lost (or tied), and four of those had a kick late to win the game (sometimes multiple kicks).

Tennessee was the only team in that group to get outgained by its opponent. In the other four games that eliminated a lot of survivor entries, the favorites outgained their opponents by over 170 yards (428 to 256 on average).

To put this in some perspective, over the last decade, teams that outgained opponents by between 160 and 180 yards won 86% of the time.

As a result, about 62 percent of the public was eliminated, with 38 percent advancing this week, if ties count as eliminations. (Some small percentage of pools do count ties as wins, so the Colts entries advanced in those.)

Our picks were most heavily on the Colts, Saints, 49ers, and Eagles, with a smaller subset on the Broncos and Ravens. Our biggest “fades” compared to public pick rates were nearly entirely avoiding Cincinnati and Tennessee.