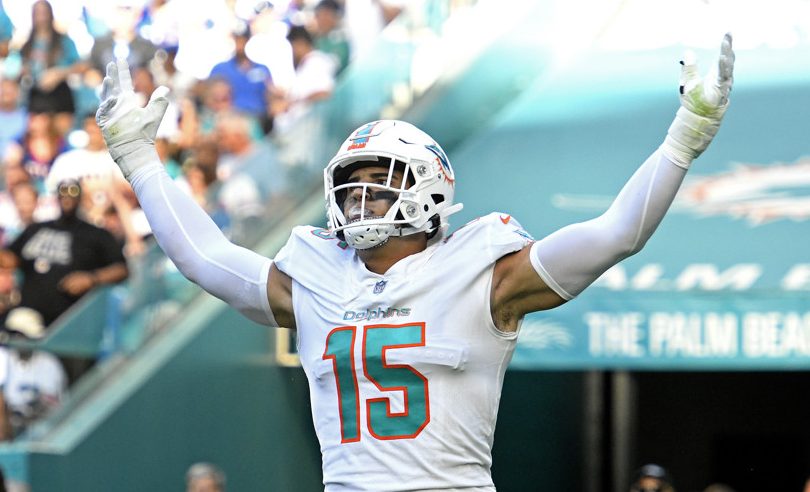 This is an early summary of the most popular picks so far in Week 15.

These numbers are early, and you should expect some of these teams to rise in popularity, as right now, about 31 percent of the public is picking teams outside of these five. We will go through these five most popular teams.

Miami is a solid play this week if the popularity numbers stay near where they are. The Dolphins have no future value, and they have relatively high win odds at 78 percent.

Yes, you would like to have one of the higher-EV plays available (Arizona or Dallas), but those teams were heavily used by entries to navigate through the gauntlet to get to this point.

The Dolphins have similar win odds and popularity to the 49ers, but they have less future value. Miami also has significantly better win odds compared to the teams being picked by about 25 percent of the public.

The Niners have similar win odds and popularity to Miami, along with a solid EV. However, if you may still need an option in what could be a tight Week 17, San Francisco projects as a high-EV pick that week.

It would be preferable to save the Niners, but if you’re deciding between taking them and going with a team with win odds below 70 percent, then using them now makes sense.

This is a “use ’em if you’ve got ’em” week with the Cardinals, but most entries don’t have them available. Arizona is the biggest favorite of the week and will not have an EV this large again this year, as its schedule gets tougher moving forward.

Similar to Arizona, this is a good week to use the Cowboys if you have them available. They are one of the largest favorites of the week and have relatively low popularity.

The Cowboys do have future value next week, when they will be an option against Washington at home. But entries are more likely to have at least one of the LA Chargers, Philadelphia, or Seattle for next week compared to the top options this week.

So on balance, using Dallas is an high-EV move this week.

The Eagles may not be the preferred option this week, but they might be the necessary one if you’ve used the other four teams on this list (plus some other high-usage teams like Buffalo and Tampa Bay).

Their EV is below the other options, but it’s above some other picks that are drawing interest this week.

The Eagles also draw the spiraling Giants next week, who have been without QB Daniel Jones and may be without him for the rest of the year. So they could have a higher EV in Week 16 if you have another option now.

And on the seventh week, the upsets rested.

After a tumultuous six-week stretch of survivor eliminations, Week 14 returned to the favorites winning as expected. All of the popular choices got through.

Here is a summary of the most popular picks for Week 14, and the results:

Most of the survivor-relevant games in Week 14 didn’t even require a late sweat. Most of the favorites won big, and only the Green Bay Packers trailed at half (though they took the lead for good early in the third quarter).

About 97 percent of the public advanced, with Carolina being the biggest loss. Nearly all of our recommendations survived (99.6%), with four total picks in multi-pick pools on Carolina, Washington, or Pittsburgh.

Here is how our pick recommendations are shaping up so far heading into Week 15.