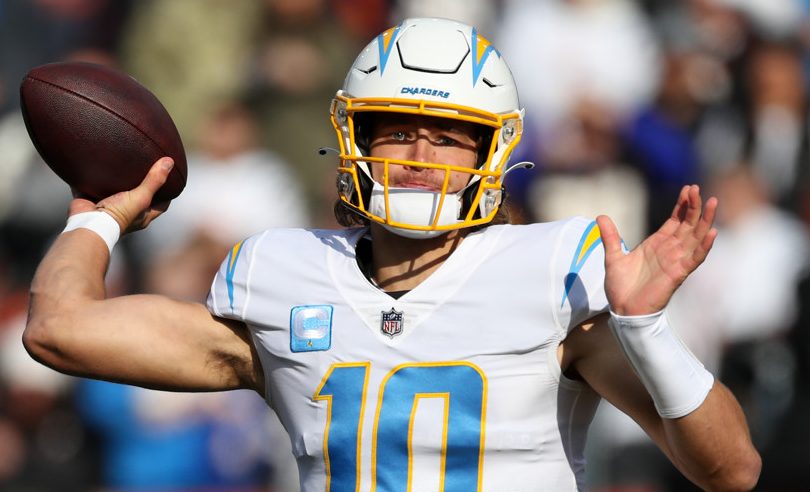 This is an early summary of the most popular picks so far in Week 14.

Besides these five, Denver (9%) is the only other team drawing more than 2 percent popularity so far.

Let’s quickly go through these five.

This is a week where four of the five top options have very little usage among remaining entries. For example, only 5-plus percent of the public has used the Chargers once, and that was in Week 12 when they lost at Denver.

That makes for a dynamic where most entries have several options available to choose from. Right now, the public is going with the Chargers, but not too heavily.

That could continue to shift as the week continues, though, as the win odds have moved up based on the Giants QB situation. Daniel Jones has already been ruled out, Mike Glennon suffered a concussion, and the team signed Jake Fromm, who might start.

Right now, the Chargers have a pretty good EV of 1.07. They do have future value in Week 16, when they are projected as the largest favorite of the week against Houston.

We will see how many of these Titans picks were preset from a few weeks ago and shift based on their recent form.

The Titans right now have moderate popularity and a modest EV (0.98), but if the popularity goes down, the EV could rise. Right now, they slot below other options in value.

The Packers are the one team here that has some higher past usage, which is constraining who can pick them. As a result, they have the best EV of this group (1.11) thanks to also having the highest win odds (84%).

Green Bay does have future value in Week 18 against Detroit, but that comes with an asterisk. The Packers might not be playing for much that week, so using them now is a pretty good option.

The Saints have the lowest win odds of this group (71%), and given their similar popularity, they have the lowest EV right now. New Orleans could see a value bump if some key players get healthy and are active, including RB Alvin Kamara, who has missed each of the last four losses.

The Saints have no future value, so if they do see a win-odds rise, they could become a viable play. But for now, they slot below other options.

The Seahawks have similar win odds to Tennessee, higher win odds than New Orleans, and slightly lower popularity than both. That makes them a potential option.

Houston hasn’t declared a starting quarterback yet for this week, but that news could shift the line, impacting Seattle’s value either way.

For an amazing sixth week in a row, the most popular public pick in survivor pools went down, this time in dramatic fashion.

Here is a summary of the most popular picks for Week 13, and the results:

All three survivor-relevant losses this week came down to a late score (or non-score). Washington beat Las Vegas with a late field goal, the Ravens missed a would-be game-winning two-point attempt against Pittsburgh, and the Lions got their first win of the season with a touchdown on the final play.

None of the other matchups that impacted survivor pools were decided by a touchdown or less.

As a result, about 28 percent of the public was eliminated, with 72 percent advancing this week.

Our picks were most heavily on the Rams, Eagles, and Dolphins, as well as most of the other teams that won. Our biggest “fades” compared to public pick rates were Minnesota, Las Vegas, and Kansas City. As Meatloaf once sang, “Ain’t no doubt about it, we were doubly blessed.”

With those results, we estimate that now less than 1 percent of the public that started Week 1 is alive. (About 0.8 percent, to be more exact). Meanwhile, we are still at around 4.5 percent, representing over a fivefold advantage after 13 weeks.

Reviewing the Week 14 Recommendations So Far