Big Ben being ruled out is big news in Week 10 survivor pools, as they were the most popular pick in survivor pools heading to Sunday. 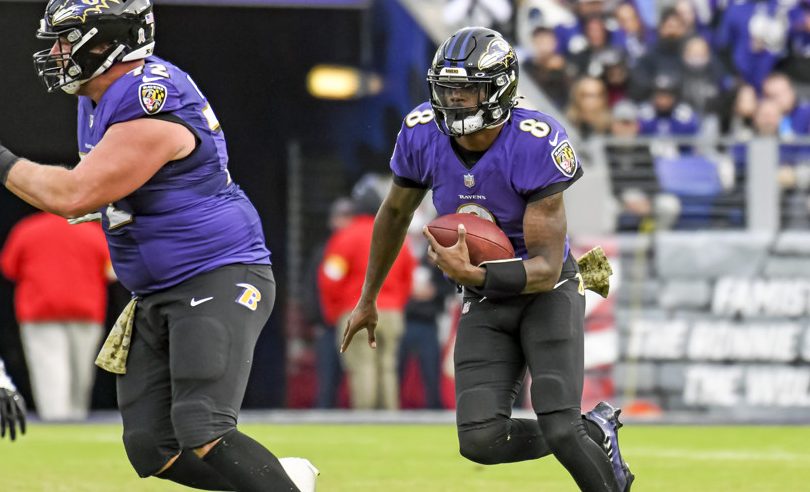 Lamar Jackson and the Ravens have survived some key games, can they do it again? (Mark Goldman/Icon Sportswire)

This is an early summary of the most popular picks so far in Week 10.

The Buffalo Bills and Tampa Bay Buccaneers are coming in just below Arizona in early popularity numbers, and then there’s a drop-off.

Let’s go through the pros and cons of the top five in popularity.

The Steelers are an attractive choice this week because they have basically no future value. Their schedule gets substantially harder after Detroit, and we have them projected as an underdog every week moving forward.

That doesn’t mean you have to use them, especially if you’ve made some picks in past weeks that saved future value. Because of their popularity and the win odds of less popular options, the Steelers have the lowest Expected Value of any of the top five picks this week.

The Ravens have similar win odds to Pittsburgh, but they’re coming at almost half of the popularity right now. They do have some moderate future value, but this is the last week in which we currently project them with over 70 percent win odds.

So relative to Pittsburgh, they have a better EV.

The Ravens do have lower win odds than some less popular options with higher future value, which is why they have a modest 1.00 EV right now. Still, they may be a good option if you think more of your pool will be on Pittsburgh and you need to save teams like Buffalo and Arizona.

The Dallas Cowboys have a pretty solid EV this week and are a reasonable consideration. Their win odds are just above Pittsburgh and Baltimore, and they have slightly lower popularity.

This is offset some by their future value, though. They are the projected largest favorite of Thanksgiving week despite having win odds of only 70 percent against Las Vegas. That projects to be a fairly difficult survivor week coming up soon.

The Colts likely come down to availability. They had high popularity in Week 6, and they were the most popular pick last week that advanced, in a week that took out half of all other entries. (Nearly 50 percent of all entries that advanced last week used the Colts.)

The Colts have a good EV again, with slightly higher win odds and lower popularity than the top three options. This would be a good week to use them if you still have them available.

Arizona has similar EV to Indianapolis this week, but has more future value. Thus, preserving the Cardinals would behoove you unless you’ve used most of the other options.

The Cardinals rank third in our future value measure for a standard 100-entry pool. They’re likely to have higher or similar value in the following weeks:

Week 13 and 15 in particular get pretty thin, especially with a majority of entries having already used most of the top options.

Week 9 was another chaos week in survivor, with several big upsets.

The Colts were the second-most popular pick and started the week with a Thursday night victory, but Sunday’s games were treacherous across survivor pools. The Dallas Cowboys were the most popular public pick and laid an egg against Denver, while Buffalo lost to Jacksonville in the biggest upset of the season so far by win odds.

Here is a summary of the most popular picks for Week 9, and the results:

Over half (52%) of all remaining entries were eliminated in survivor pools on average. Even if your pool pick distribution was different, it likely had a lot of eliminations considering five of the 11 teams with a pick popularity of 1 percent or more lost in Week 9.

For the season, about 11 percent of original entries are alive for the public, while about 16 percent of TR entries that started the season are still alive.

Baltimore on Thursday Should Be Another Early Play

This Thursday’s game again should have survivor relevance again. Baltimore is playing at Miami as a 7.5-point favorite and is the second-most popular survivor pick for the week.