We break down the pros and cons of the five most popular NFL Week 1 survivor picks in 2020. Is it worth burning the Chiefs or Ravens so soon? 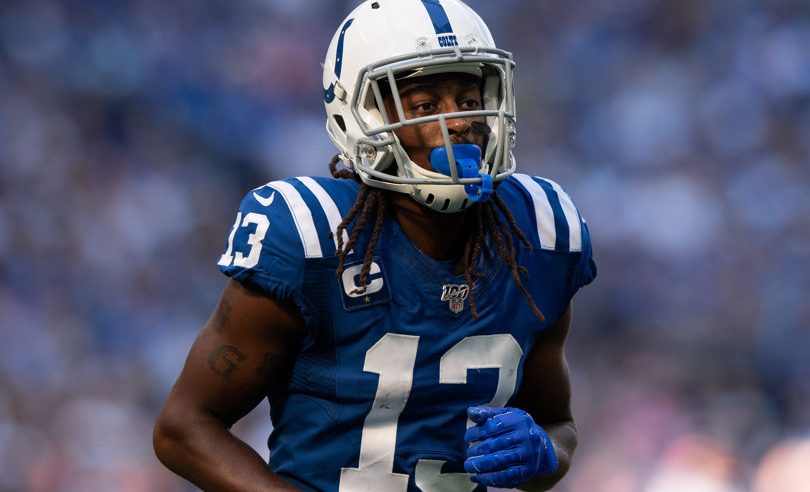 T.Y. Hilton looks to rebound with Philip Rivers at QB for the Colts, and they start with a great matchup (Photo by Zach Bolinger/Icon Sportswire)

It’s officially time to start sweating your 2020 Week 1 NFL survivor picks. (If you’re like a lot of our readers, you tend to get pretty involved in NFL survivor pools, and are playing more than one entry!)

As we’ve done in past years, in this post we analyze the five most popular survivor and knockout pool picks of Week 1 using the “Holy Trinity” of survivor pick strategy data: win odds, pick popularity, future value.

How do we know this approach is sound? It’s the foundation of our NFL Survivor Picks product, and over the past three years, our subscribers have reported nearly $2.5 million in survivor pool winnings using our data-driven survivor picks and tools.

First, a quick reminder. If you want to get serious about winning more survivor pools, you need to learn the key strategies behind maximizing your odds to win.

In short, it takes a lot of data and math, along with a healthy dose of courage to make some riskier, contrarian picks.

A good way to start learning is with our free survivor strategy articles, which also provide more insight into the research we apply to our premium survivor pick recommendations. Here’s a selection of them:

Below we analyze the five most popular Week 1 survivor picks, which we determine by aggregating public picking rates from major national survivor pool hosting sites. As a result, this analysis should cover the picks that you are most likely considering making in your survivor or knockout pool in Week 1 2020.

To be clear, we are not saying that the first team listed, Indianapolis, is the absolute best Week 1 survivor pick for your specific pool(s). Rather, we’re just telling you that Indianapolis is the most popular Week 1 pick in survivor pools nationwide. We then break down the major pros and cons of potentially picking them.

Why don’t we just give you the “best” survivor pick of the week? Well, that’s the problem with pretty much all other survivor pick analysis out there.

There Is No Universal “Best” Pick For Survivor Pools

The best Week 1 pick for your NFL survivor pool depends on a variety of important factors, including the total number of entries in your pool (the more entries, the more you’ll need to emphasize avoiding the most popular picks to have the best shot to win) and its rules (e.g., if you need to make double picks later in the season, you have to be more careful about burning good teams early).

To get our specific pick recommendations, just hop over to our NFL Survivor Picks product, which is free for Week 1. Using the My Pool Picks feature, you tell us some things about your pool(s), and then the product shows you which Week 1 picks give you the best chance to gain ground on your opponents.

Note: Data referenced below was current as of Wednesday evening, and could change between posting time and kickoff time. Our product updates multiple times per day with the latest information.

Before this 2020 Week 1, the last week before Thanksgiving in which there was no team with a pick popularity above 20% was Week 4 of 2015!

Of course, there’s a reason for why public picks are so diverse this week, and it’s tied to the future value of Kansas City and Baltimore, which we will discuss for each of those teams below. With both KC and Baltimore being among the heaviest favorites, but also the two teams expected to have the most wins in 2020, plenty of entries are looking to save them and pick another team in Week 1. As of post time, the Colts are slightly ahead as the “other” choice, offering relative safety without burning a ton of future value.

The Colts are the second-largest favorite of the week, drawing a Jacksonville team that appears to be in full rebuilding mode in the opener. It will also be Philip Rivers’ first game as quarterback for Indianapolis. The Colts are the early betting favorites to win the AFC South, while Jacksonville (a team we project at only 5.1 wins this year) looks like they could be a popular team to pick against in survivor pools this season.

Indianapolis has also been rising in popularity all week, so you will want to check where they ultimately settle. They were the fourth-most popular choice entering the week, but have been climbing to 17% popularity as of Wednesday.

The Colts also have a favorable schedule in 2020, which partly explains heightened expectations for them. In fact, our deeper analysis of their schedule using Vegas season win totals shows that they have the easiest schedule entering 2020. As a result, Indianapolis’s future value is higher than Buffalo but far less than Kansas City or Baltimore. They also have some possible near-term use cases in both Week 3 (vs. the Jets) and in Week 6 (vs. Cincinnati).

Buffalo, as a 6.5-point favorite at home against the Jets, offers a little less safety than the Chiefs, Colts, or Ravens. The counterpoint is that Buffalo has far less future value, which is a big plus.

Buffalo was a sneaky survivor play in several weeks last year thanks to a soft schedule, which was a factor in Buffalo finishing 10-6 and making the playoffs as a wildcard. The Bills’ 2020 schedule, though, is more balanced and gets a lot tougher after their opener. Other than a Week 17 matchup at home against Miami, which could be subject to funky team motivations like resting starters, Week 1 looks like one of the choicest spots to use Buffalo this year.

The Bills’ pick popularity is moderately high but not prohibitive given their win odds. However, you are taking a slight step up in elimination risk compared to some other most popular choices. So when it comes to the Bills’ decision, it is taking a little more risk now, to be in better shape for future weeks.

Baltimore slots in above Kansas City in terms of pick popularity. The Ravens, who had a dominant 2019 season with Lamar Jackson at quarterback, are expected to pick right up where they left off and be a top contender in 2020.

As a result, the Ravens have the second-highest survivor future value of any team. In fact, Kansas City and Baltimore are both pretty far in front of all other NFL teams in terms of the number of future weeks in which they will likely be a strong survivor pick. We project Baltimore as having the highest win odds in no less than five future weeks on the 2020 schedule.

Meanwhile, the Ravens’ win odds are good, but not significantly different than alternative options this week. With our models giving them a 74% chance of beating the Browns, they slot in below Kansas City and Indianapolis in the safety category, and just above several others.

If you want to use Baltimore this week, you need to ask yourself if you really want to burn them on a week in which they are not even the largest favorite, or save them for when they are.

Kansas City starts as the largest favorite of Week 1, but the reigning Super Bowl champs also have the most future value of any NFL team right now.

There are 10 other weeks in the 2020 season where we project the Chiefs to have win odds of 70% or higher, making them a tremendous asset to keep available in your quiver. We project Kansas City to have even higher win odds than this week in four future weeks. That includes a stretch in Week 8 and Week 9 when they host the Jets and Panthers back-to-back and should be heavy favorites in both games.

So the decision to use Kansas City this week primarily comes down to deciding whether it’s better to save them for a hopefully more advantageous situation later in the year. It’s not completely cut and dry, though. Looking at just Week 1 in a vacuum, Kansas City probably is the best value pick; the Chiefs’ are the safest team of Week 1 and not wildly popular, a very rare combination this early in the season.

However, you’ll need to survive a lot longer than Week 1 to win your pool. So the decision comes down to whether another option is close enough to save Kansas City for a hopefully even higher value situation in a future week.

San Francisco is the fifth most popular survivor pick among the public this week. Last year’s NFC champions also have the fifth-highest future value in survivor pools this year.

The 49ers are a reasonable pick option in several future weeks in 2020, and look like they will be the safest pick option in both Week 5 (vs. Miami) and Week 14 (vs. Washington). In terms of relative safety, San Francisco’s win odds in Week 1 are about even with Buffalo, and behind the other three slightly more popular choices.

When you’ve got two alternatives (the Bills and Colts) that are similarly safe and also reasonably close in pick popularity, it makes for a more challenging case for burning San Francisco’s better future value this early.

Get Our Week 1 Survivor Pick For Your Pool

As we mentioned above, every possible NFL Week 1 survivor pick has an expected value and future value associated with it, and those values can vary significantly based on the characteristics of your pool.

It takes a lot of data and math to figure out which pick (or combination of picks, if you’re playing multiple entries) gives the biggest boost to your expected survivor pool winnings, which is why we spent years building our NFL Survivor Picks product.

You answer a few questions about your pool’s size and rules, and it provides customized pick recommendations for your pool using the latest matchup data, betting market odds, and public picking trends. It tracks the picks you’ve already made with each of your entries, and even recommends how to split your picks for up to 30 different entries across a mix of teams.

We invite you to try it out, and good luck in your survivor pools this week!