Survivor Pool Strategy 2020: Deciding When to Use Kansas City and Baltimore will be Key

The Kansas City Chiefs and Baltimore Ravens are the two most valuable teams in NFL Survivor Pools in 2020, but deciding when to use them won't be easy. 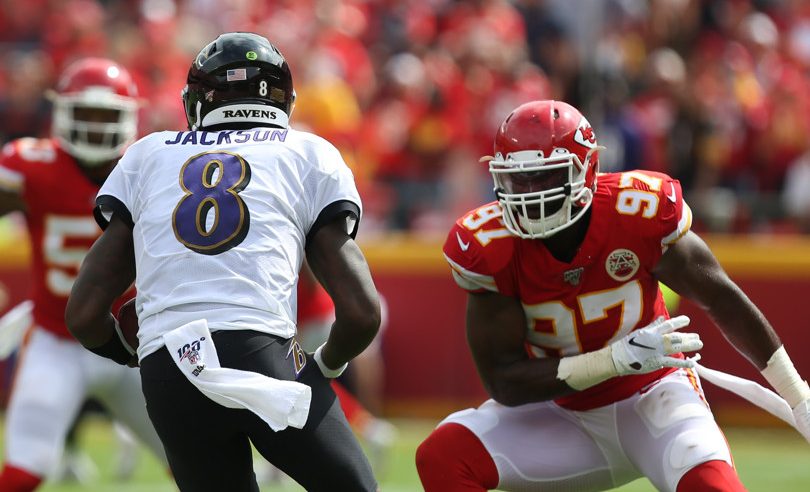 The Chiefs and Ravens meet in Week 3, but for Survivor pools, they will have lots of value in other weeks (Photo by Scott Winters/Icon Sportswire)

For NFL survivor pool players, 2020 will be a year when expected top teams Kansas City and Baltimore should be heavily favored in quite a few weeks, starting right away in Week 1.

In terms of making NFL survivor picks, deciding when to deploy the two most valuable pieces on the 2020 survivor chess board will therefore be a critical decision.

In this post, we take a deep dive into the Chiefs and Ravens season schedules, with an eye toward optimizing your 2020 survivor pick strategy.

Kansas City and Baltimore Have The Most Future Survivor Pick Value

According to future game win odds derived from our preseason power ratings, Kansas City or Baltimore show up as the highest projected win odds option in nine of the 17 weeks. That’s over half of the weeks in the 2020 season.

That means there will be at least seven weeks where you may not be able to take the week’s safest pick option in terms of win odds, since you cannot simply pick Kansas City or Baltimore most weeks.

Expand this analysis out to the expected top two safest survivor picks each week, and Kansas City or Baltimore make up 15 of the 34 spots, including multiple weeks where they are the top two options together.

So it isn’t a matter of if you will need to take some risks by taking other teams with lower win odds, it’s a matter of when. Knowing when it makes the most sense to take those risks in 2020 can give you big leg up in your pool.

Interestingly, despite being relatively safe picks, by Week 1 standards neither KC or Baltimore are extremely popular survivor picks. Kansas City is being selected by 13% of survivor pool entries nationwide and Baltimore by 15% of entries.

Still, nearly 30% of a typical pool is already using either Baltimore or Kansas City right away, and burning an extremely valuable survivor weapon right off the bat.

Compared to a lot of other weeks, Week 1 has some options nearly as good as Kansas City and Baltimore in terms of safety, as five other teams are favored by between 6 and 8 points. (You can check out our Week 1 survivor pick analysis for more specific details on the options.)

A full analysis of Week 1 options is key, because you don’t win a survivor pool based on simply surviving the earliest weeks. Planning ahead and finding reasonable alternatives can give you a significant advantage later over opponent entries that burned Baltimore or Kansas City early.

As it turns out, there are several other weeks in which Baltimore and Kansas City will have even higher win odds than they do in Week 1. In addition, there are multiple Week 1 alternative picks that provide less than a 10% difference in win odds compared to the Ravens and Chiefs.

In particular, Weeks 8 and 9 are key weeks for Kansas City’s future value in survivor pools. The Chiefs currently project as the safest team by win odds in both weeks, playing the Jets and Panthers at home in consecutive games.

Our forward-looking projections estimate win odds of 87% in each of those two contests, making them KC’s highest win odds games of the season. But having the best win odds isn’t the only thing that makes saving Kansas City for Week 8 or Week 9 so potentially valuable.

Based on what we know now, those two weeks also don’t have a lot of other high win odds options for survivor picks. The Chargers, hosting Jacksonville, are the only other team with win odds currently projected above 65% for Week 8.

And in Week 9, no other team currently projects with higher than 66% win odds. San Francisco (vs. Green Bay), Arizona (vs. Miami), and Minnesota (vs. Detroit) are the current best “other options” for Week 9, and none are looking like huge favorites right now.

So there are two weeks, right in the middle of the season, where Kansas City is currently projected to have great win odds relative to any other team, and where having the Chiefs available could prove extremely valuable.

If Kansas City does have a 15-20% safety edge over any other options in those weeks based on win odds, then they will have a high expected value, even if they still end up as a moderately popular pick.

However, a good chunk of survivor pool entries will likely use Kansas City as a pick at some point over the first seven weeks of 2020, so it looks unlikely that the Chiefs will have high pick popularity in both Weeks 8 and 9.

One of those weeks, at least, could end up being an absolutely stellar spot to pick the Chiefs in terms of boosting your odds to win your survivor pool.

Baltimore is close to Kansas City in terms of its future value as a survivor pool pick in 2020, but the payoff for saving Baltimore could come later in the year. Baltimore is projected to have the highest win odds in both Week 15 and 16, when the Ravens host Jacksonville and the New York Giants in consecutive weeks.

The additional risk you will need to take if you no longer have Baltimore as a survivor pick option in those two late weeks also appears quite sizable right now.

In Week 15, Baltimore is projected to have 90% win odds against the Jaguars, the NFL’s projected worst team in 2020 according to the betting markets; that’s the highest single game win odds projected for any team in any 2020 season game. The next highest win odds projection that week is Green Bay’s 72% win odds hosting Carolina, a big drop down in safety.

Baltimore is then projected at 85% win odds by our models a week later. Outside of Kansas City (vs. Atlanta), the Saints (vs. Minnesota) and the Texans (vs. Cincinnati) are the highest other projected win odds in Week 16 at around 70%.

Of course, deciding when to use Baltimore this year involves a broader understanding of survivor pool strategy, particularly regarding how the size and rules of your survivor pool should dictate your pick strategy. If interested, you can read about how different pool rules and different pool sizes affect survivor strategy.

For example, Weeks 15 and 16 could end up being key weeks in larger survivor pools (where you should expect to have to survive the entire season to win), and in pools that require multiple picks per week late in the season (where you’ll have a much lower chance of surviving those double pick weeks if you don’t have any good teams left in your quiver).

In a smaller survivor pool, though, saving Baltimore for that late in the season probably makes much less sense. In smaller pools, Weeks 4 and 5, when the Ravens play at Washington and vs. Cincinnati, look like potentially better spots if the Ravens have high expected value those weeks.

Kansas City and Baltimore are two of the most valuable pieces on the 2020 survivor pool chess board, but the very best spot to use each of those teams depends in large part on the characteristics of your specific pools.

In some cases, it will make sense to go ahead and use them during an earlier week where they are providing decent value — including potentially Week 1, in which relatively high safety and low pick popularity for both KC and Baltimore can’t be ignored.

In other cases, your pick strategy shouldn’t even consider the Chiefs and Ravens in Week 1, to preserve the option to use them in one of the expected prime value situations described in this post.

Crunching all the numbers to figure out the best answer for you pool is why we built our NFL Survivor Picks product. If you’d like to see the picks we’d recommend for your specific pools, we invite you to check it out for free for NFL Week 1.