If you want to get the most out of March Madness brackets, you need to understand what you are up against, and the chances of winning bracket pools. 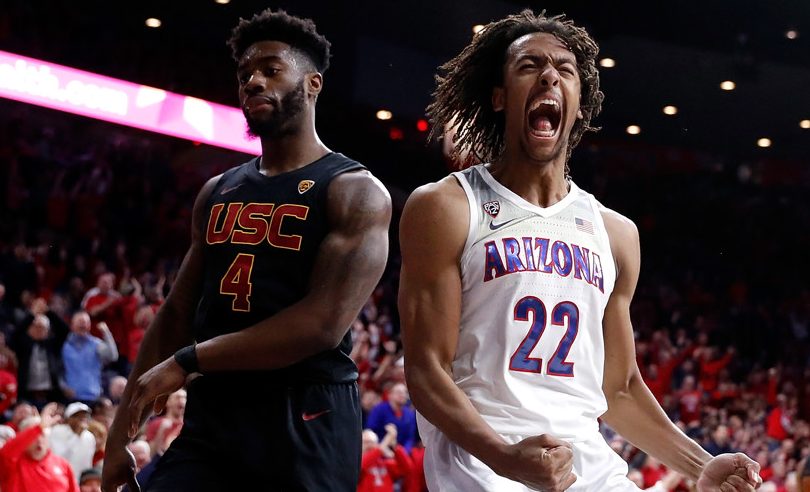 We always hope, that with both hard work, good analysis, and some luck, that our picks will come through.

When you’re competing against tens, hundreds, or thousands of people in a bracket pool, even with the smartest picks in the pool going in, you’re never going to be expected to win. We don’t sugarcoat reality here; that’s just probability. If you have one entry in a 100-entry pool and you’re four times as good as everyone else, you’re still only expected to win that pool about once every 25 years.

Should you still play? If you like making money and are willing to think long-term, yes. Over time, the expected profits on your pool entry fees with an edge like that should be fantastic. But it’s certainly not a get-rich-quick scheme, unless you get lucky and score your first win early, then stop playing.

The Reality of Winning Bracket Pools and Contests

March Madness Bracket Contests come in all shapes and sizes. Still, the general reality is that the number of payout spots will be way less than half of the number of entries. Since 2015, based on data reported by our subscribers, the average chance a random single-entry would win a prize in a given pool was 7%.

That means that if you were to play one entry in a 30-entry pool with that payout structure for 30 years, and you had no edge over your opponents, you should expect to win the first place prize once, and qualify for any prize a total of three out of the 30 years.

If you play in the largest pools, the odds of winning a prize go down even more sharply. Since 2015, in pools of 10,000+ entries or more, on average only about 2% of entries qualified for a prize.

So the base expectation should be that winning money is a pleasant surprise, and not guaranteed by any means. Our goal is to increase our subscribers’ chances so that they win more than expected over time. But we also know, and respect, that taking down a prize in any pool requires both skill and luck.

Our recent performances show both the value that our advice can provide, and the volatility of playing in bracket contests where predicting eventual winners through six rounds of action includes lots of risk.

Combined, the average has been 61% winning a prize in at least one pool over the last four tournaments.

We hope we can continue that overall performance, but from year to year our performance is bound to fluctuate. Our most frequent NCAA champion recommendation won the title twice in the last four years. Five of the last eight teams that were our most frequent recommendations to the title game got that far. Even by our own projections, none of those teams were 50% to win the title. So we know getting those kind of results, even if we have great analysis and predictive numbers for tournament teams, is not guaranteed.

In addition, the algorithms we’ve developed now customize bracket picks for many different types of scoring systems, several of which have radically different scoring structures (e.g. huge upset bonuses vs. no upset bonuses). So our brackets for two different types of pools can look much different. That usually means that when a portion of our customers’ picks are doing great (say, if lots of favorites are winning), some other portion of our customers’ picks probably aren’t doing so great (say, if they’re in upset bonus pools with really aggressive picks).

Because of this, it’s almost guaranteed we’ll never have a March Madness where all of our paying customers walk away thrilled. That’s a bummer to us, because we want all our customers to be thrilled with TR. But unfortunately, it’s just the nature of this business. The value is in the analysis, which should help you win more often than expected in the long run. It’s always great to be hopeful, but it’s just as important to be realistic.

The Key to Long-Term Success in Winning Bracket Pools

We discussed in more detail how you can treat bracket contests like the stock market and turn excellent profits over time. If you’d like to profit from bracket pools, and you’re a rational human being, you’ve basically got two options:

If you’re a new subscriber, or if you remain unconvinced about TeamRankings after using our picks for a year or two and not winning anything, it’s probably best just to listen to one of our long-term customers, which also touches on the dynamic of playing multiple brackets. He sent us this email after the 2016 tournament:

I’ve been using TeamRankings for a few years now. Don’t remember how many. However, each and every year since the late eighties I’ve participated in an NCAA March Madness Pool that’s grown to about 100 entries per year. It includes astute players from many states.

Me I’m a rank amateur. I hardly ever watch any of the NCAA Men’s basketball games leading up to the tournament. The only reason I even watch the games beginning with the Sweet Sixteen is — after using TeamRankings I might add — I’m always in the running to at least place or show. So, as it goes, it’s more enticing to watch a game if one has skin in the game.

Let me qualify. I don’t do just one pick. Generally, I’ll throw five to seven entries in the 100-entry pool. It pays five places win, place and show. That said, the results over the past four years defy the odds. I won this March Madness Pool in 2016 picking UNC over Villanova. (Only one picked Villanova to win; he placed fifth.) And I won it all with Louisville in 2013.

So, participating in this 100-entry Madness Pool for over 30 years, and placing multiple entries each year, one of those WON it outright two out of the past four years. To put this into perspective, before TeamRankings, I may have placed or showed up in the top 5, but split sharing a win only once in over 30-years, I think 1987 or 1988. Wow. What a difference TeamRankings has made.

He sent us another update after the 2018 tournament, telling us that one of our brackets came in 5th place and cashed. In 2017, one came in 3rd place and cashed. That made it three straight years that he had won a prize in his 100-entry pool using our brackets, plus two first place wins in the last seven years.

Playing multiple brackets is obviously a numbers game. The years you don’t win you take a much bigger hit, and some years a 3rd or 5th place finish may or may not win back your investment. But if you think you have a really big edge, especially in larger pools, you may not want to wait for potentially 10, 20, or 30 years for that edge to hopefully manifest itself in the form of a pool win.

We’re confident we’re delivering value with this bracket picks service, and we’re happy to say that we’ve also compiled and published the data substantiating that claim on our “Past Performance” page. If you want to see some of what we deliver, you can look through our reviews of the 2017, 2018, 2019 and 2021 picks, and can also see examples of some of the past write-ups that we provide to our subscribers in the days leading up to the tournament each year.

When those overall stats about winning bracket pools will apply to you personally will depend on how lucky you get during your first few years as a customer, and it may take more patience to reap the rewards than a lot of people are willing to commit. We understand that, but there’s nothing we can do to change it. We just keep on doing the best analysis we can, and working to improve our methods year after year.