The round recaps have now been updated to include the results of the Sweet 16 and Elite 8 games and look ahead to what is needed in the Final Four. 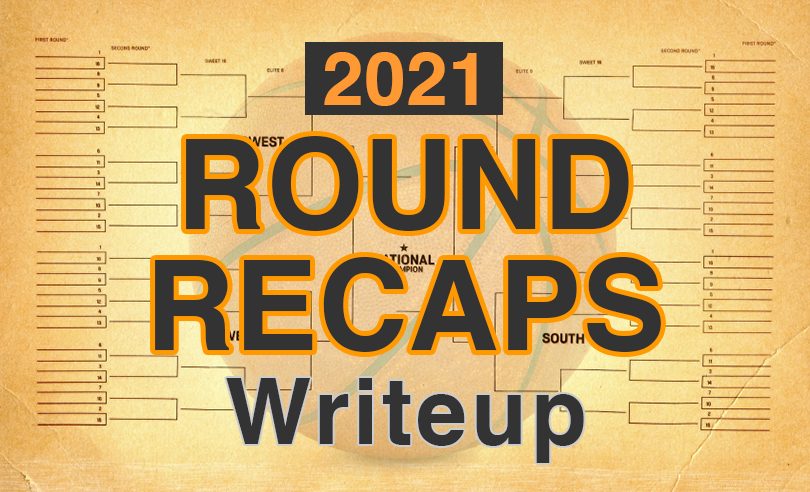 The 2021 Final Four is now set. In terms of pick popularity, here’s how it breaks down according to an average of public picking trends data from multiple bracket contest sites:

Add those percentages up, and the “average” bracket this year is expected to have gotten a little more than one Final Four pick right (1.34, to be precise). So if you got two Final Four picks right, you did better than expected.

Assuming the picks for all four regions are independent, here is the percentage of brackets you’d expect to have picked a specific number of Final Four teams right this year:

The Overall Bracket Pool Landscape after the Elite Eight

It’s also worth noting that after a historically upset-heavy first few rounds, we were a grand total of 3 points away from seeing a Final Four made up of three No. 1 seeds and a No. 2 seed. On top of that, almost no one picked the lower seeded team that made it.

In retrospect, a “chalkiest possible” pick strategy of having all No. 1 seeds make the Final Four this year would have yielded two picks correct, while mixing it up with one or two No. 3 or worse seeds would have almost certainly done worse. And the most likely winners of bracket pools this year will be brackets that have No. 1 Gonzaga, No. 1 Baylor, and No. 2 Houston in their Final Four.

We will say it again until we are blue in the face: You do not HAVE to make dark horse Final Four picks in order to win your pool.

Your Pool(s) May Not Reflect National Averages

Of course, from specific pool to specific pool, pick percentages for each team can vary substantially, especially in smaller pools. If you’re in a 10-person pool in Texas and several entries had both Baylor and Houston, along with Gonzaga, well, that’s just bad luck.

On the other hand, if you’re in a 100-person pool in Big Ten country, getting two Final Four picks right might put you in great position, since no Big Ten teams made it.

With just three games left to play, let’s break down how the TR brackets are currently doing, and review the Sweet 16 and Elite 8 outcomes that impacted them the most.

TeamRanking Brackets vs The Public after the Elite Eight

As usual, there were plenty of picks over the last two rounds that TR brackets missed. However, what matters most is how those developments impacted TR brackets relative to the general public.

Just as with the first two rounds, TR brackets ended up outperformed the public average in both the Sweet 16 and Elite Eight. The size of that lead, though, grew with the results from the second weekend of action.

TR Best Brackets were on average only two points better than the public average after the first two rounds, but now are more than 8 points better than the public average using 1-2-4-8-16-32 scoring by round. Our brackets for the smallest pool sizes are doing the best, with Best Brackets for standard scoring pools of 35 people or less in the top 10-15% of ESPN, such as this one for sub-15 person pools.

More importantly, TR brackets also have more potential points left to score from the Final Four onward, than the public does. Here is a summary of the average points (using 1-2-4-8-16-32 scoring) for TR Brackets versus the public:

57% of subscribers win a bracket pool prize each year.