Our recommendations for the Sweet 16 picks in 2018, following the first weekend of action in the NCAA Tournament. 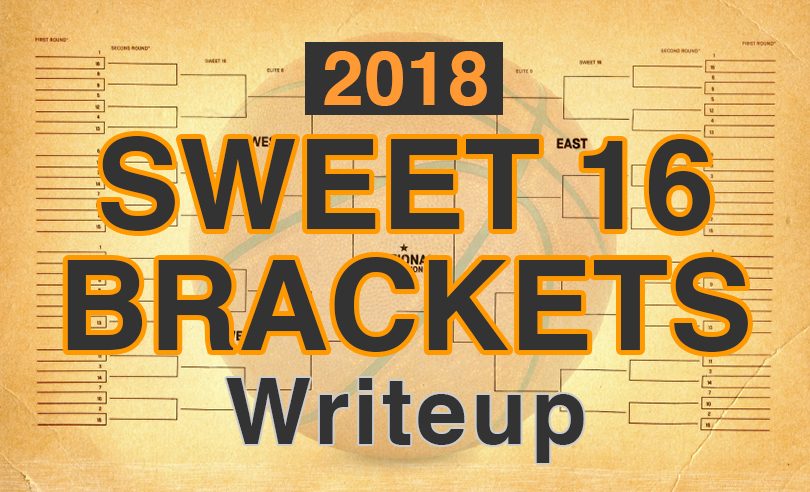 We’re excited to announce the release of our customized brackets for Sweet 16 pools for 2018.

These pools, which start fresh with the Sweet 16 round, are run by several bracket contest sites (ESPN, RunYourPool, etc.) and are often referred to as “Second Chance” bracket contests.

As with our full-tournament brackets, our first step in making Sweet 16 bracket picks is to create updated “tournament ratings” for all remaining teams. Then, we create customized brackets for your pool by simulating two things:

To simulate the rest of the NCAA tournament games, we use round survival odds based on our updated tournament ratings. Those ratings are based on our own analysis of team performance (accounting for injuries and playing time changes), the latest betting market info (both futures bets and Sweet 16 lines), and pre-Sweet 16 power ratings from a number of top predictive systems (e.g. TeamRankings, ESPN’s BPI, and the KenPom ratings).

Combining those tournament simulation results with public picking data [see our technical note below about this], we then run Sweet 16 bracket pool simulations. This enables us to test thousands of different combinations of bracket picks, until we find the bracket that comes out on top most often for a specific scoring system and pool size.

As of Tuesday afternoon when we released our Sweet 16 brackets, none of the major sites that host Sweet 16 / Second Chance bracket pools had published any public pick data for 2018 contests. This is the first time we’ve encountered this situation in several years.

As a result, we had to make our own public pick projections, and use those estimations in our bracket simulations. If you’re not interested in how we made those projections, you can skip to the next section (General Strategy Notes). If you are interested, here are the details.

It was a 3 step process:

Second, we made a few adjustments to the pre-tournament “public pick ratings” based on the results so far. The biggest adjustments here were:

Finally, we simulated the tournament using the “public pick ratings”, and used the resulting survival odds as our projected public pick data.

This entire estimation process assumes that the public makes their picks by comparing two teams and then being more likely to choose the team they think is better as the winner, similar to the way survival odds are calculated.

Looking at the actual data, these assumptions are close to being correct, but there are a few minor issues. For example, before the tournament started, the public was more likely to pick #11 Syracuse as NCAA champion than you would expect based on their early round pick rates. However, the difference was small, with their later round pick rates being less than half a percent higher than expected.

However, we think the issues are minor enough that this method should give reasonable results, and until/unless some national bracket content platforms publish 2018 pick trends data, we have no other choice. Maximizing your edge in pools requires projecting how your opponents are likely to act, and if you don’t have any “real” data to lean on, you just need to make the most educated guesses you can.

We’ll monitor the major bracket sites over the next couple days, and when/if public data is posted, we’ll compare to our estimates. If we decide that any published data is far enough off our estimates that we should re-generate bracket picks, we’ll do that and send out an email letting you know.

With only 15 games left in the NCAA tournament, a highly conservative (“chalky”) approach that picks mostly the same NCAA champion and Final Four teams as the public doesn’t have a good chance to stand out from the crowd in a Sweet 16 pool.

So our Sweet 16 brackets in larger pools generally skew a bit riskier than our full tournament brackets.

Here are some value picks that you may see in our customized Sweet 16 brackets for standard 1-2-4-8 scoring this year. Keep in mind that the exact brackets we recommend for you depend on your pool size and scoring system, so picks for smaller pools may include only one or two of these picks.

To Win The Title

Duke is barely behind Villanova in our projected NCAA champion odds at this point, with Villanova at 21.4% and Duke at 20.8%. Some sites, and the betting markets, actually give Duke slightly better odds. So it’s clear that Duke’s title odds are very close to Villanova’s. However, based on the pre-tournament pick data, the public doesn’t view Duke as nearly as good of a team as Villanova, and we expect Villanova to be the more popular champion pick in Sweet 16 pools. Our projection is a 26% pick rate for Villanova and an 18% pick rate for Duke, but even if the edge is smaller, Duke will still likely be undervalued relative to Villanova.

We estimate Duke has a 54% chance to reach the Final Four, compared to only 31% for Kansas, in large part because their Sweet 16 opponent (#11 Syracuse) is a worse team than Kansas’ opponent (#5 Clemson). While we do expect the public to pick Duke more often than Kansas out of this region, we don’t think the difference will be this stark, and have it as only a 51%-38% edge to Duke, making them undervalued and Kansas overvalued. There’s also the wildcard chance that Syracuse ends up being an even more popular pick than we project after their upset run to the Sweet 16, in which case Duke would be even more undervalued.

The Aggies are the most undervalued Final Four pick remaining. Based on pre-tournament pick data, we expect #3 Michigan and #4 Gonzaga to be viewed by the public as the class of the remaining West region, while #7 Texas A&M and #9 Florida State are the scrubs. However, in terms of quality, Texas A&M is a lot closer to that lead pack than Florida State is, with twice the advancement odds (17% vs. 8%), yet roughly the same projected pick rate (8% vs. 7%).

#7 Nevada vs. #11 Loyola is close to a toss up, but we expect the public to pick the better seeded team at a higher than 50/50 rate, as they nearly always do. If the public does pick Nevada at our projected rate of 57%, Loyola will be a good underdog pick in all but the smallest pools.

#1 Kansas is a strong favorite over #5 Clemson in the Sweet 16, so this pick is fairly risky. As a result, you won’t see it many Best Brackets for traditional scoring. However, it may show up in alternate/portfolio brackets,and in brackets designed for pools with seed-based scoring or upset bonuses.