Our 2017 Writeup after the completion of the first weekend of games, with advice for Sweet 16 or Second Chance bracket pools. 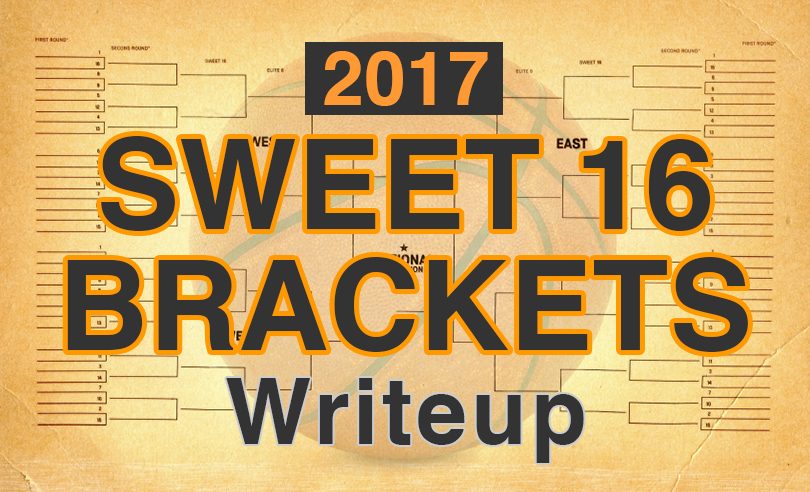 We’re excited to announce the release of our customized brackets for Sweet 16 pools for 2017.

These pools, which start fresh with the Sweet 16 round, are run by several big bracket contest sites (ESPN, CBS, Fox, etc.) and are often referred to as “Second Chance” bracket contests.

As with our full-tournament brackets, these picks are created by simulating two things:

To simulate the rest of the NCAA tournament games, we use updated survival odds for every team that are based on our own analysis of team performance (accounting for injuries and playing time changes), the latest betting market info (both futures bets and Sweet 16 lines) and ratings from top predictive systems coming out of the Round of 32 (like our own power ratings, ESPN’s BPI, and the KenPom ratings).

Then, combining those tournament simulations with public picking data, we run bracket pool simulations. This enables us to test thousands of different combinations of bracket picks, until we find the bracket that comes out on top most often for a specific scoring systems and pool size.

With only 15 games left in the NCAA tournament, a highly conservative (“chalky”) approach that picks mostly the same champ and FInal Four teams as the public has almost no chance to stand out from the crowd in a Sweet 16 pool.

So our Sweet 16 brackets generally skew a bit riskier than our full tournament brackets.

Here are some value picks that you may see in our customized Sweet 16 brackets for standard 1-2-4-8 scoring this year. Keep in mind that the exact brackets we recommend for you depend on your pool size and scoring system, so picks for smaller pools may include only one or two of these picks.

To Win The Title

The main reason? They’re still the team we favor to win the title, though not by a huge margin. Four teams stand out from the field at this point as the most likely champs:

As you can see by comparing the champ% to the pick rate, Kansas is overvalued by the public, but the other three title favorites are all being valued roughly appropriately. As a result, the “default”, or conservative, champ pick in our brackets will tend to be North Carolina. They’re not significantly overvalued, and they have the best title chance.

Our Survival Odds project Florida as the most likely winner of the East region, but it’s close to a three way tie, with South Carolina lagging behind:

The public, on the other hand, is picking Baylor 38% of the time, Wisconsin 28%, and Florida only 24%. That makes Florida not only our East region favorite, but also the most undervalued team in the region. With that combo of low risk and high value, they’re the Final Four pick from the East in all of our 1-2-4-8 scoring Sweet 16 Best Brackets.

Our projections have both Arizona (37%) and Gonzaga (36%) as more likely to emerge from the West region, but both are quite popular (42% and 39% pick rates, respectively). Picking West Virginia adds quite a bit of risk to your bracket, but also adds a large amount of value. In smaller pools the risk isn’t worth it, but they are our West region Final Four pick in some medium sized 1-2-4-8 pools. In these pools, picking Florida as champion is too high risk, so instead we suggest advancing Florida only to the title game, and adding West Virginia as a high-risk, high-reward Final Four pick.

Kansas is the public’s most popular Final Four pick in Sweet 16 bracket contests, being picked to reach Glendale by roughly 67% of the public. That leaves plenty of value on the other three teams in the region. Of those three, Michigan is the most likely to make the Final Four, according to both the betting markets and our Survival Odds. In small and medium sized pools the increased risk isn’t worth it, but in very large pools, we are suggesting Michigan as a value Final Four pick.