A performance review of how our picks for the 2017 NCAA Tournament did, where North Carolina and Gonzaga met of the national title. 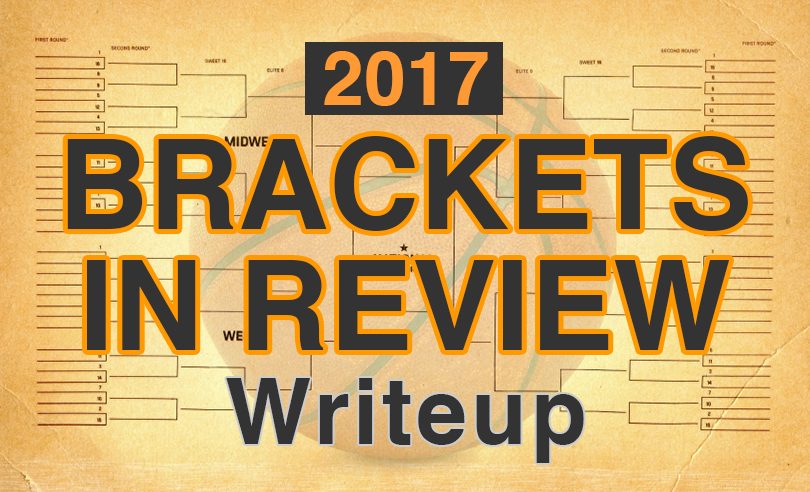 For the 2017 NCAA Tournament, our Bracket Picks had a year that will be hard to top. According to survey responses provided by our subscribers, 90% of them won at least one prize in 2019. Across all pool types, customer win rates were 7.1 times higher than you would expect based on pool size, payout structure and the number of brackets entered. Subscribers reported winning a prize in 84% of all pools with 50 or fewer entries. The reported win rate was above 50% for all pool sizes all the way up to pools with 1,000 entries. And for very large pools (1,001 to 10,000 entries) our subscribers still reported winning a prize 21% of the time. That’s 14.3 times more often than expected.

If you’re interested, you can see more detailed information on our Bracket Picks performance over the last five years.

Overview of the 2017 NCAA Tournament

In 2017, North Carolina emerged from a region that also included Kentucky and UCLA with Lonzo Ball (and his father Lavar enjoying his 15 minutes of fame) to win the national title. The Tar Heels wiped out some of the pain of the previous year’s loss to Villanova in the title game by beating Gonzaga, who finally broke through and made their first Final Four appearance in program history, as the No. 1 seed from the West.

South Carolina emerged out of nowhere as to become a dark horse Final Four team as a No. 7 seed out of the East. Meanwhile, Oregon, a No. 3 seed, advanced by beating Kansas in the Midwest Region.

Here is how our average recommendations fared compared to the public for the 2017 tournament in each round.

Overall, the numbers in the table above are outstanding:

But our goal is not just to be better than average, we want to have brackets that finish near the top and win our customers money. And we did that this season, as the win rates reported by our subscribers show.

What Worked in the 2017 NCAA Tournament Picks

We will take the overall numbers shown above. But let’s put some specific details with them to show key pieces of analysis that led to those results.

First though, a brief reminder of what we’re reviewing here. We generate customized bracket picks for our subscribers, so that your pool scoring system (and any modifications like upset bonuses or seed bonuses) and pool size can dictate the best strategy in each particular case. While the advice for one type of pool may be different than for another on a specific game or type of team advancing, some key over-arching themes led to success in a variety of pool types in 2017 (as you’ll see below).

These picks aren’t the only thing our subscribers get. They also get access to a variety of data and tools that can be used to “roll your own” picks, so to speak, or to do analysis for other pool types beyond bracket pools.

Plus we publish other information throughout tournament week. This includes an early bracket write-up on Monday with initial thoughts and reactions to how the pick recommendations are likely to shape up. A final bracket write-up is released on Wednesday night further detailing some key recommendations. (Note: any direct quotes from those write-ups included here have been italicized.)

We Nailed North Carolina and Gonzaga in the Final

No other major college basketball prediction site even forecast UNC as the most likely champ, let alone also getting the runner-up correct.

While it may not seem like this was any great task to pick two No. 1 seeds to meet in the title game, it’s a combination that most of the public was not making. In 2017, there were eight teams being picked as champion by between 6% and 17% of the public, with defending champ Villanova the most popular choice. Gonzaga, as a No. 1 seed, was being picked below three teams who were No. 2 or 3 seeds (Duke, Kentucky, and UCLA).

A lot of our suggested brackets will have Gonzaga over North Carolina in the title game. Gonzaga is only the 6th-most popular tournament champion pick this year, being picked by roughly 8% of the public. So for your most valuable possible pick — the most likely pick to make the difference between you winning your pool or not — our brackets are suggesting a pick that 92% of your opponents DIDN’T make.

Now, combine that Gonzaga champion pick with a title game opponent of North Carolina, and in a typical pool you’d only expect 2% of your opponents to have the same last three picks as you — even though you’re picking all No. 1 seeds!

With three relatively low risk picks (relative to other late round picks, at least), you’ve already differentiated your bracket from 98% of your pool opponents. If this short list of critical strategic picks comes through, you’re going to have a great shot at a prize. In many pools, there’s simply no need to take a bunch more risk with your other picks, like adding on a dark horse Final Four pick just because you don’t like the optics of four No. 1 seeds.

So the main thing that went right in 2017 was a divided public, when it came to the title winner and runner-up. Our picks stayed with two No. 1 seeds, including one that was very undervalued, to meet. If you get all those points from getting two teams to the final, you are going to win a lot of pools.

Our picks in early games outperformed the public. Those starts set up brackets with North Carolina as champion in a favorable position heading deeper into the tournament.

Overall, our “Best Brackets” for subscribers averaged three more wins in the first round, one more win in the second round, and about 1.5 more wins in the Sweet 16 than the general public. In our “Best Brackets” for standard scoring pools of 15 or less entries (the most conservative pick suggestions), our first round picks went 29-3. That included going 7-1 in games involving the No. 7 to No. 10 seeds, and correctly picking two other double digit seed upsets.

Our analysis indicated that No. 2 seed Louisville was an overvalued team in many types of bracket pools in 2017. As a result:

In retrospect, it would have been nice for those 90% of Best Brackets to have Oregon advancing all the way to the Final Four. Still, merely picking Oregon to make the Elite 8 gave our brackets a leg up on the majority of the general public.

What Did Not Work in the 2017 NCAA Tournament Picks

While our results outperformed the public, and our customers reported winning prizes over seven times as often as you would expect by chance, not everything went our way. While we nailed the champion pick with and runner-up in most of our “Best Brackets,” some results still hurt.

SMU as a Sleeper in Large Brackets

SMU was a sleeper pick in the East Region as the No. 6 seed, and some larger brackets had them advancing deep into the tournament. SMU, though, lost in the first round against USC after having a double-digit lead in the second half. USC took their first lead of the game with just over two minutes remaining, the teams exchanged some buckets, and then SMU missed a driving shot in the lane at the buzzer to lose by one point.

The East Region in General Was a Wasteland

For most of the NCAA Tournament, our picks succeeded at a very high level. But that was not true in the East Region, where our picks to the Final Four to subscribers included No. 1 Villanova, No. 2 Duke, and No. 6 SMU.

In the other three regions, our picks in the first four rounds of the tournament went a combined 39-6 in a sample “Best Brackets” for small pools of less than 15 entries. In the East, though, in that same bracket our recommendations went 7-8. It did not correctly gain a single point scored after the first round of games. That’s right, in some brackets, our recommendations had more losses in the East than in the rest of the tournament combined.

Ultimately, the Eastern losses were somewhat muted, because a relatively unpopular No. 7 seed, South Carolina, emerged from the region to go to the Final Four.

When the dust settled on the 2017 NCAA tournament, around 90% of our subscribers had won a prize in at least one pool they participated in, and the subscribers that did respond to our survey reported over $800,000 in winnings. Extrapolating that out, because about 30% responded to the surveys, and we estimate our subscribers overall won nearly $2.5 million in prize money in 2017.