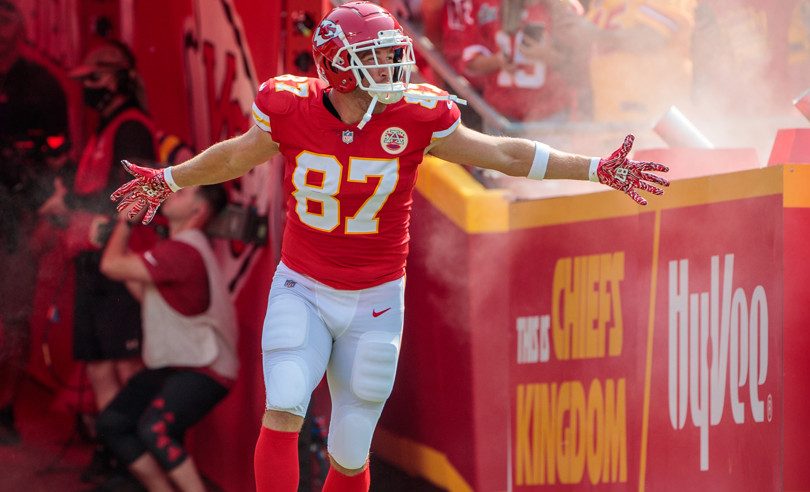 Here, we’ll track Week 8 news and discuss the implications for maximizing your edge in NFL and college football pick’em contests. We’ll also provide some of the rationale behind picks potentially recommended by our Football Pick’em Picks product.

We will continue to add to this post until Sunday of NFL Week 9, so check back for daily updates. Here’s what’s available now:

Here’s our early look at some potential value plays in NFL pick’em pools for Week 9.

The Arizona Cardinals finally lost their first game last Thursday, and QB Kyler Murray suffered an ankle injury during that loss. Meanwhile, San Francisco is coming off a good performance at Chicago.

When these teams met back in Week 5, Trey Lance started at quarterback for San Francisco, and Arizona won 17-10. However, San Francisco outgained Arizona and failed on four different fourth downs, while Arizona fumbled the ball four times but recovered three of them.

In other words, these teams were a lot closer than the records and result indicated.

The Niners are only a slight 2.5-point underdog, and our models like them relative to the market win odds. With only 15 percent of the public taking the 49ers at home, they are providing some value here.

The Chiefs have continued to struggle with turnovers. Meanwhile, the Packers have now won seven straight and are coming off a big prime-time win over the Cardinals.

This one is pretty much a toss-up, but the public is understandably heavy on the 7-1 Packers here. That means contrarian value on Kansas City in weekly and seasonal game-winner pools.

These teams are going in opposite directions with recent results, and they’re a lot closer together than the public is crediting.

Philadelphia just blew out Detroit, while the Chargers have now lost consecutively to the Ravens and Patriots after a hot start.

With nearly four out of five entries going with the Chargers right now, the value is on the Eagles in one of the closest matchups of the week.

Another NFC East versus AFC West matchup gives us another value upset play for weekly contests.

The Giants have squandered most of their late opportunities, while the Raiders have outperformed expectations so far. But this line is only two points, and the Giants are very unpopular here.

Finally, we’ll close with a big favorite which is a relative value despite high popularity.

Few entries are picking the Jets to follow up their upset over the Bengals with a win against the Colts. But relative to other choices, the Colts are less risky.

Over 90 percent of the public is picking several other teams with lower win odds. As we see with some of the other value favorites, several teams favored by a small margin are extremely popular.

As a result, stick with the Colts and seek upset picks elsewhere.

Modest favorites took a beating in Week 8, with favorites overall having a losing week (7-8). Teams favored by less than a touchdown went only 4-7.

In game-winner pools, the public averaged 8.2 wins in Week 8. The biggest outcomes for the public were Dallas getting a late touchdown to beat Minnesota and Tennessee beating Indianapolis in overtime.

The public was heavily on the sides that ended up winning those games, and both were the betting-market underdogs by kickoff.

Our season-long “Max Profit” picks averaged 7.5 wins, and the weekly picks averaged 7.6 wins. The Philadelphia and San Francisco wins were generally value adds against the public, but those were more than offset by the close late losses for the Colts and Vikings.

Those two results combined for a 1.6-win swing for the public and were the difference between a big positive week and being slightly down.

The public averaged 7.7 wins out of 15 in spread pools for the week, with several potential results depending on the specific pool spread offered. For example, a pick on the Rams would have covered the opening line of -13.5, but would have lost against the closing spread of -16.5.

The two biggest plays of the week were again the Titans and Cowboys. The point spreads in those games moved 4-5 points from the opening lines to kickoff. Yet well over half the public took both of those teams in spread pools, several at the original opening lines.

Those picks going the public’s way were the big swing plays of the week.

According to NFL Network’s Ian Rapoport, Rodgers is already ruled out because he is not vaccinated. League policy mandates him to miss at least 10 days before he’s eligible to return.

The Packers were an extremely popular pick against the Chiefs before this news, though Kansas City was the slight favorite. Expect the Chiefs to be favored by close to a touchdown when the line without Rodgers gets posted.

Jordan Love, whom the Packers drafted in the first round last year, will now be starting Sunday.