Finding smart contrarian pick opportunities in NFL Week 9 isn't easy, but one close matchup stands above the rest of the field. 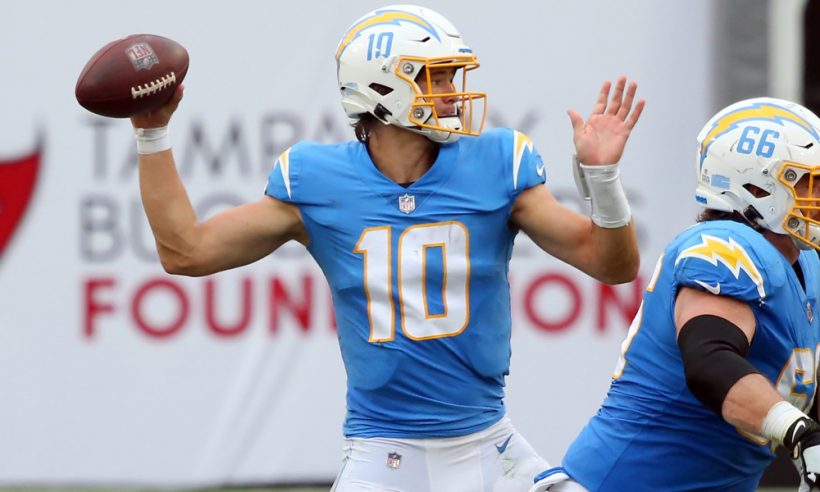 Justin Herbert wants to help you charge up your pool standings. (Photo by Cliff Welch/Icon Sportswire)

NFL Week 9 features a few intriguing matchups in terms of value picks, but you’ll need to stomach some risk in order to take them.

As you start to think about your NFL Week 9 picks, the analysis below will help you make smarter decisions in your private NFL office pool or in online contests like ESPN Pigskin Pick’em, Yahoo Pro Football Pick’em, and CBS Sports Football Pick’em.

After a red hot Week 7, last week’s value picks came down to earth, thanks in part to some unfortunate turnover luck.

The Falcons over Carolina pick ended up being a big win in terms of differentiation (only 20% of the public was on Atlanta), but the Ravens lost to Pittsburgh in frustrating fashion, falling by 4 points while losing turnovers 4-1).

In addition, the Patriots had a potential game-winning drive terminated by a lost fumble at the end of the game.

If either of those last two games had gone the other way, we would be sitting on another nice gain against the public. But in the end, our five highlighted value plays netted two wins, while the public yielded about 2.8 wins from those same games.

Overall, Week 9 looks pretty rough from a value picking perspective, with no significant favorites being underrated by the public in the early going. As a result, navigating the week’s picks is more about knowing which upset picks definitely aren’t worth the risk, and which might be worth consideration.

(If you want our most up-to-date pick recommendations, become one of our Football Pick’em Picks product subscribers and get customized pick advice for your pool.)

Based on their predictive rating, the Texans aren’t as bad as their 1-6 win/loss record implies; for example, we have them rated slightly higher entering Week 9 than 3-4 Detroit, and barely behind 3-4 Denver.

Facing a Jaguars team that will be missing starting QB Gardner Minshew and starting rookie and sixth-round draft pick Jake Luton in his place, Houston is a 7-point favorite this week. However, the Texans are being picked only half as often by the public as the other touchdown favorite this week, New England, and their 80% pick popularity is in line with several much smaller favorites this week.

If you’re looking for a big upset pick, don’t make it this game.

Recent memories linger in the minds of fans, and a near-upset on Monday Night Football at the hands of the underperforming New York Giants last week has the public a bit more skittish about Tampa Bay this week than you’d expect.

However, it’s never wise to overreact to one game result. Despite the close win against the G-men, the Bucs still top our Last 5 Games ratings, while New Orleans has won all of its last three games by the close margin of just three points.

Vegas odds are currently giving the Bucs about 69% win odds in this one, against public pick popularity of about 75%. Those numbers are close enough it makes sense to stick with the favorite here.

So far, the Chargers (No. 15 in our predictive ratings entering Week 9) are a near-average team wearing the disguise of a 2-5 win/loss record thanks to some stiff early competition. They’ve played Kansas City, Tampa Bay, and New Orleans all close.

LAC is currently a very slight favorite (by 1 point in the betting markets) in this home game, yet only 33% of the public is going with them in pick’em pools.

This game is an even matchup and could go either way, but from a risk/reward perspective, the Chargers are the clear value play.

After a season-opening upset loss to Jacksonville, the Colts have gone 5-1 straight up, 4-2 against the spread, and 3-0 at home under new QB Philip Rivers.

While Baltimore is clearly the better team at this point, Lamar Jackson hasn’t looked his 2019 self so far, and this game looks to be a lot closer than many people think. Indianapolis is only a 2.5-point underdog in the betting markets, yet less than 20% of the public is picking the Colts upset.

For comparison, more people are picking Jacksonville (a 7-point underdog) to beat Houston this week. With that profile, the Colts are well worth consideration as a risky gamble in Week 9.

Seattle has the hype train going in full effect right now, with a gaudy 6-1 record and MVP chatter about QB Russell Wilson. But peel back a layer of the onion and things are not quite so pretty.

The Seahawks’ 10-point win against injury-riddled San Francisco last week may be a bit misleading, and a road loss to Arizona in Week 6 demonstrated that despite the legends, Wilson doesn’t always make the key plays down the stretch.

On balance, our ratings have Seattle as 4-5 points better than Buffalo on a neutral field, right in line with the point spread in this game (Seattle by 2.5) factoring in some home field advantage for Buffalo. That’s not a huge margin, and less than 25% of the public is picking Buffalo to win.

If you’re in a weekly prize pool, especially a larger pool, that’s likely worth a gander.

Get All Our NFL Week 9 Picks For Your Pool

The Week 9 pick opportunities highlighted in this article are based on data from our Football Pick’em Picks product, which provides objective game predictions and projected opponent picking trends for every game.

Note that we are not saying that you should make all of the picks we list above — the upset picks especially. The best Week 9 picks for your NFL pool depend on strategy factors such as your pool’s size, rules, and prize structure, plus situational factors like your current place in the standings and the number of weeks left.

What we are saying is that the teams mentioned in this post provide some of the best opportunities to differentiate your Week 9 picks from your pool opponents, by taking on only a modest amount of risk, or no additional risk at all.