Week 8 of the 2022 NFL season is here, and we have several value favorites showing up in your pick'em pools. 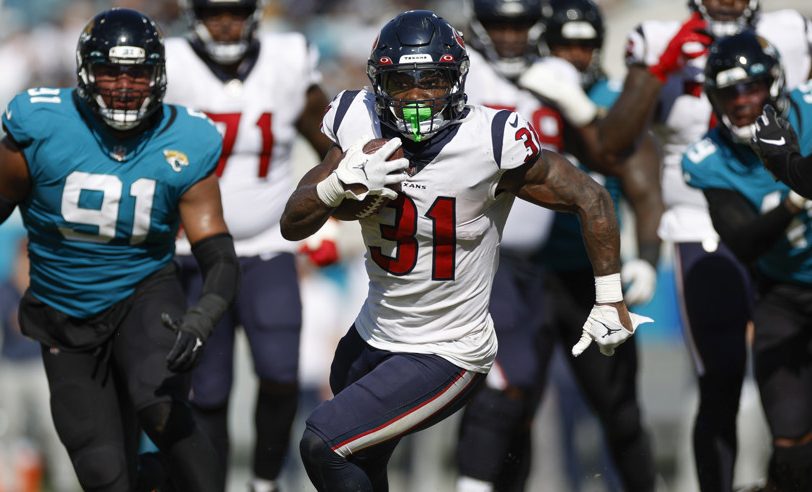 Week 8 in NFL pick’em contests is upon us, as we continue to see plenty of great stories and big upsets.

We plan to periodically update to this post through Sunday of Week 8, so check back for updates. Here’s what’s available now:

Here are some early value picks we are seeing in Week 8 based on win odds and popularity info.

As you’ll see with the value picks this week, this is the week for very unpopular slight underdogs. None are bigger than Houston. The spread on this game is currently only two points, and our models have it as a toss-up.

A whopping 91% of the public is taking the 4-2 Titans over the 1-4-1 Texans. But Titans QB Ryan Tannehill was in a walking boot after last week’s game, and his health status is up in the air for this week. If he can’t go, rookie QB Malik Willis would start.

The Texans have fared well against the Titans recently. They beat Tennessee in their first matchup last year in a big upset, and they nearly took Tennessee out again in the regular-season finale as the Titans were playing for the No. 1 seed in the AFC.

The Titans have won four straight games, albeit in far from dominating fashion. In fact, they’ve been outgained in yards in all six of their games so far. The passing game has been struggling after the Titans traded WR A.J. Brown in the offseason, and rookie WR Treylon Burks’ injury further set them back.

If Tannehill is out or limited, that makes an upset even more likely. Leverage against the public here with a Texans pick for big value if it hits.

The Bengals are coming off a blowout win over Atlanta, while Cleveland has lost four in a row (three of which came by a field goal or less). So the public is heavily on Cincinnati on the road in this rivalry game.

The Browns do have a strong running game with Nick Chubb, and the defense has dealt with injuries up front but finally might be getting healthier. They held the Ravens to just 254 yards in their loss last week, which was the first time they’ve held an opponent under 300 yards since the season opener.

Cleveland has some upset-value potential as an unpopular choice in the Battle of Ohio.

New England just got embarrassed on Monday Night Football and has a brewing quarterback controversy, while the Jets just won their fourth game in a row. But the Jets did lose star rookie RB Breece Hall to a season-ending knee injury this past Sunday, and he has been making most of the big plays for an offense that has otherwise been pretty limited lately.

This is also a chance to pick a Bill Belichick team coming off a big loss. His teams tend to bounce back in the face of controversy and drama.

With the Patriots favored and the Jets the far more popular side, picking the Pats gives you an opportunity to take the more likely winner at a great value.

Detroit is yet another unpopular small home underdog this week against Miami.

The Lions have scored only six points total in their last two losses after averaging 35 points per game in their first four games of the season. Injuries are largely to blame for the recent offensive donwtick.

If star RB D’Andre Swift can return from the shoulder and ankle injuries that have sidelined him since Week 4, that should make an impact. WR Amon-Ra St. Brown got placed in the league’s concussion protocol after his first catch in the loss to the Dallas Cowboys on Sunday, but head coach Dan Campbell said Monday that he didn’t actually have a concussion and should be available this week.

If those two can be on the field for the first time since Week 3, the Lions will be more dangerous here than the public is giving them credit for.

Our last underdog value is across the pond, where the Broncos are currently a 2.5-point underdog against the Jaguars.

Denver could have QB Russell Wilson back, which would make this closer to a toss-up game. However, the public is very down on this Denver team that continues to lose close games.

If the line remains under a field goal, Denver is an attractive small upset pick at higher-leverage value in this game.

Week 7 was a down week overall for our picks. There were some big upsets that we didn’t have, and a lot of the value plays against the public went the other way.

That happens. After a hot start, we were probably due for some of the public darlings to mostly hit in the same week.

In game-winner pools, the public averaged 8.6 wins out of 14 games in Week 7. The two biggest favorites (Tampa Bay and New England) losing kept the overall wins from climbing higher.

Overall, our season-long “Max Profit” picks finished just behind the public at 7.6 wins. Some toss-up games where we had San Francisco and Denver more heavily than the public made the difference.

Weekly picks finished down this week at 4.9 wins. The public had their day, as the value plays pretty much all lost. The aforementioned 49ers and Broncos were joined by value picks on Jacksonville, Indianapolis, and New Orleans in many weekly pick sets.

The public finished over .500 in Week 7 in spread pools, averaging 7.7 wins in 14 games. The Jets, Patriots, and Chiefs were the most popular picks and they went 2-1.

Our pick recommendations were solid in season-long pools, averaging 7.5 wins in season-long max-profit picks, just below the public in a “public” week. Meanwhile, weekly picks, which tend to also account for public pick popularity more to differentiate, slumped to 5.2 wins on average.