Week 7 of the 2022 NFL season is here, and we have several value favorites showing up in your pick'em pools. 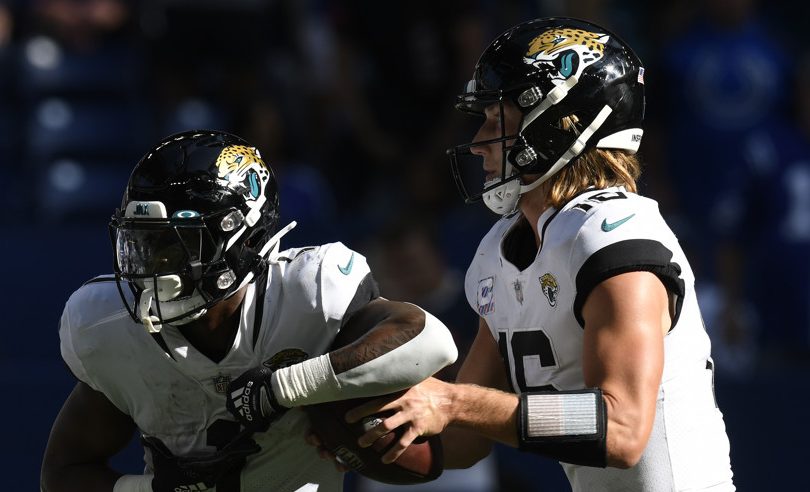 Can the Jaguars get back on the right track in Week 7? (Michael Allio/Icon Sportswire)

We plan to periodically update to this post through Sunday of Week 7, so check back for updates. Here’s what’s available now:

Below are some picks initially setting off the value radar for Week 7 in game-winner-based NFL pick’em contests. Things are bound to change as kickoffs near, but it’s worth keeping an eye on them.

The New York Giants are off to a 5-1 start after a come-from-behind win against Baltimore. Jacksonville, meanwhile, has lost three in a row after its big victory against the Chargers.

Close-game performance is the differentiator here, as New York is 5-1 in one-score games, while Jacksonville is 0-4. But Jacksonville has the slightly better point differential.

The Jaguars are favored, but the public is heavily on New York this week. This makes for another great value play in game-winner pools.

Although the Denver Broncos are fresh off two overtime losses in a row in primetime games, they’re currently showing up as a value favorite. The 2-4 Broncos are favored over the 4-2 New York Jets, but as you might imagine with those records, the public is all over the Jets in this one.

The Jets have won three in a row, including double-digit-margin wins over Miami and Green Bay. However, their offense hasn’t been rolling. (They were dead even with the Packers in yards and first downs, but they got the biggest play of the game, a punt-block touchdown.)

The Broncos’ offense hasn’t been clicking at all, but their defense has kept them in every game.

We need to monitor the news on Broncos QB Russell Wilson, who reportedly suffered a hamstring injury late in the Monday night game. Whether this ends up being a value may depend on Wilson’s status.

San Francisco is the biggest value underdog play this week when it faces Kansas City.

The public has jumped off San Francisco this week following its loss at Atlanta. But our models like the Niners against the spread in this one, and there’s value on an upset pick here since only 15% are picking them to win.

The Colts are another unpopular small underdog where you can get some value with the public pick rates. The Colts have 46% win odds, but only 20% of the public is picking them.

It’s somewhat understandable that the public would trust the Titans, as they have beaten the Colts in four straight games, including at Indianapolis earlier this year. But the Colts are coming off their best offensive game (34 points and 29 first downs) and could be getting star RB Jonathan Taylor back this week.

Our final value pick is the Saints in a toss-up game on Thursday Night Football.

The Saints have put up points despite a myriad of offensive injuries, and we will see who is available on this short week. But the Cardinals have injury issues of their own, and they have struggled far more on offense even before losing WR Marquise Brown and OT Justin Pugh.

With the public going Arizona’s way at a nearly 2-to-1 ratio, there is a decent value proposition on the Saints to start the week.

Week 6 was a hit-or-miss week for our picks, likely with lots of variation in individual pool performance. The spread pools were generally over the public with some key picks hitting, while game-winner pools had some positive (Washington) and negative (Arizona, Cleveland) results that balanced out.

In game-winner pools, the public averaged 7.0 wins out of 14 games in Week 6, for a .500 record in a week with plenty of big upsets. Four of the seven teams favored by more than a field goal lost outright in Week 6.

Overall, the season-long “Max Profit” picks finished ahead of the public at 7.6 wins. Wins by enough of the smaller favorites there made the difference.

Weekly picks finished down this week at 5.4 wins. Relatively speaking, the more popular smaller favorites won while the ones that were showing the most public value, like Arizona and Cleveland, lost.

The public was close to .500 in Week 6 in spread pools, averaging 6.9 wins in 14 games. The most popular picks were a mixed bag, with the Chargers failing to cover in overtime and Tampa Bay losing outright, but Cincinnati and Minnesota both got the key plays to win on the road.

That isn’t as big of a spread from the public as we’ve had in recent weeks, since of some of the popular picks worked out for the public. But the model picks were again generally successful in Week 6.