The Week 7 early value pick outlook is up, and it includes some NFC East teams in an underdog role, plus a road favorite against a backup QB. 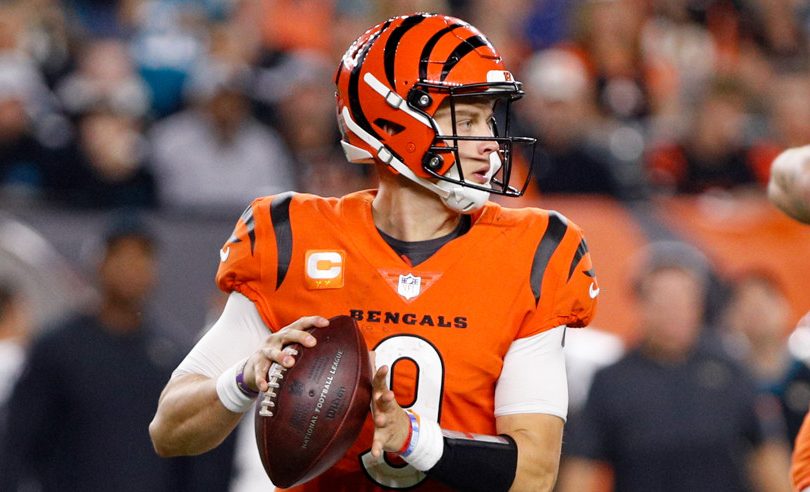 Here, we’ll track Week 7 news and discuss the implications for maximizing your edge in NFL and college football pick’em contests. We’ll also provide some of the rationale behind picks potentially recommended by our Football Pick’em Picks product.

We will continue to add to this post until Sunday of NFL Week 7,  so check back for daily updates. Here’s what’s available now:

Here’s our early look at some potential value plays in NFL pick’em pools for Week 7.

This week, the early data shows some potential upset picks for NFC East teams. The public also still isn’t quite moving off a team with a notable QB injury.

The New Orleans Saints are a decent-sized road favorite at Seattle coming off their bye week. However, the public pick rates on the Saints are not as high as most teams that are favored by about five points.

Seattle has brand-name recognition, but without starting QB Russell Wilson, this team is not the same. Backup QB Geno Smith’s 6.9 yards per attempt is well below what Wilson had averaged. On a team with a great defense, Smith’s production might be OK, but Seattle has one of the worst defenses in the NFL.

Take the value against Seattle until the public adjusts.

The Giants had a disaster game against the Rams, with four turnovers in a blowout loss. But they didn’t get dominated in yards, and they could have some value coming off that heavy turnover game.

Meanwhile, the Panthers have also regressed. They’ve now lost three in a row after a 3-0 start.

RB Christian McCaffrey tried to return from his hamstring injury last week, but he was instead placed on IR and will now be out through at least Week 8. In the Panthers’ three full games without him, QB Sam Darnold has averaged 5.9 yards per attempt and thrown six interceptions, cooling off after his hot start.

In weekly contests, the Giants are a high-leverage upset play with low popularity and a decent chance of winning.

The Chiefs won last week to get to 3-3 despite committing three first-half turnovers. They’re second in the NFL in total yards and first in total first downs gained.

Their biggest problem on offense is their league-high 14 turnovers. However, those issues may be presenting some value here.

With 29 percent of the public going with a Titans upset after their thrilling Monday Night Football win over the Bills, there is value in staying with the Chiefs this week.

Talk about an enigma.

The Raiders have been a wild team this year. They’re 3-1 as an underdog after their win in Denver. They are 1-1 as a favorite, with the win coming in overtime. (They’ve gone 0-2 ATS in that role.)

The Eagles have played a tough schedule, already losing to the Bucs, Chiefs, Cowboys, and 49ers.

The public is heavily on the Raiders in this one coming off their win Sunday, which was aided by a slew of Broncos turnovers. There’s value in an Eagles upset play in weekly pools.

The Falcons are a favorite over the Dolphins and are coming at a slight popularity discount compared to other similarly favored teams this week. This one could shift depending on where the line and popularity numbers go, though.

This is a weird game from a scheduling perspective. The Dolphins just played in London, but they do not have the week off after that trip (unlike the Jets and Falcons last week, and the Jaguars coming off Sunday’s game). Atlanta, which did get that week off, now gets a home game.

There isn’t a lot of data on how teams handle being in the Dolphins’ situation.

Favorites again had a good week, including several larger favorites winning big. There were also some key leverage games, which swung our record versus the public.

These were the highest-leverage results in game-winner pools in Week 6:

The Arizona result was a big one for the public since the Browns were the betting favorite. But that was countered by both Baltimore and Minnesota winning as favorites while the majority of the public was on the other side.

The weekly picks were again down (more on that below). The value upsets didn’t hit, though the Patriots were very close and came up short in overtime. Had they beaten the Cowboys, that would have boosted our weekly performance.

Several big results went the opposite way, while most of the others showed moderate gains against the public. As a result, both weekly and season picks were similar to public averages in Week 6.

So far this year, the weekly picks haven’t hit at a high rate. In fact, there hasn’t been a single week where subscribers have reported a 10 percent weekly win rate across all pools.

Our weekly pick sets are designed to be boom-or-bust in many cases. They aim to leverage results so that when things do break correctly, the win rates are higher. So far ,those outcomes haven’t come at a high enough rate.

Hot and cold runs do happen, but we are confident in the overall process and strategy driving those picks.

Here is a summary of how many weeks we had with a reported 10 percent or higher weekly win rate in the first six weeks of the season, versus the rest of the season, going back to 2014:

Some years have seen really hot starts, and then some regression. Others have seen cold starts, and then bounced back. Overall, the 10-plus percent weeks are about as common in the first six weeks (33.3 percent of the time) as they are in the rest of the season (32.5 percent).

We’d obviously prefer to have a hot start. The history is that about one-in-three weeks produces good weekly win rates, but those results vary and can include streaks either way. It’s just like how a .300 hitter in baseball can have a huge day or go several games without a hit.

We were looking at spread numbers because of things we observed in our spread pools (well, David Hess was, and I’m sharing it). If it feels like you’ve had bad luck in spread pools on games where you appeared to get great line value, well, it’s probably true.

First, what do we mean by line value here? In most spread pools, the specific number is set by the website or pool administrator. Often, it’s locked into place earlier in the week. So you can get quite a bit of variation in the actual spreads that entries are getting on a game.

If the administrator/site makes an error, puts an off-market line, or the line moves in one direction between when the number is set and when the final picks are due, that can provide line value. For example, the Giants were +10.5 last week in one of my pools, but by kickoff, the line was down to +7.5, providing three points of line value.

Theoretically—and over a large sample size—playing lines where you’re getting line value should give you an edge over the typical competitor. If the closing point-spread line represents the best number from the market, and it’s 50-50 on either side, then being on the side where you’re getting additional points of value should increase your win odds slightly. The amount of that increase depends on factors like the specific key numbers and amount of line movement.

We have data showing each spread number used in a pool and its distance from the closing spread, along with our recommendation. Based on the specific spreads and amount of line value, you would have expected the picks where our subscribers were getting at least 0.5 points or more of value to win overall at a 55.0 percent rate.

They’ve covered at a 51.5 percent rate. That’s below the 52.3 percent cover rate needed to break even against the juice, despite getting 1.2 points of value on average from that group.

It’s been even worse at extreme line value. Picks getting at least three points have won only 29.8 percent of the time. They would have been expected to win 56.5 percent.

I’ve seen that in my Pick 5 pool, where by far my worst results have come on the games where I was grabbing bad lines. I’ve gone 1-3 in games with three or more points of value.

All we can say here is that one of the strategies in spread pools (in addition to playing the popularity game, and using our models to identify value) is to grab free points in many cases when it is giving value, especially across key numbers. That luck should even out, but so far, sharp players that have grabbed value in 2021 haven’t profited.