Week 5 of the 2022 NFL season is here, and we have several value favorites showing up in your pick'em pools. 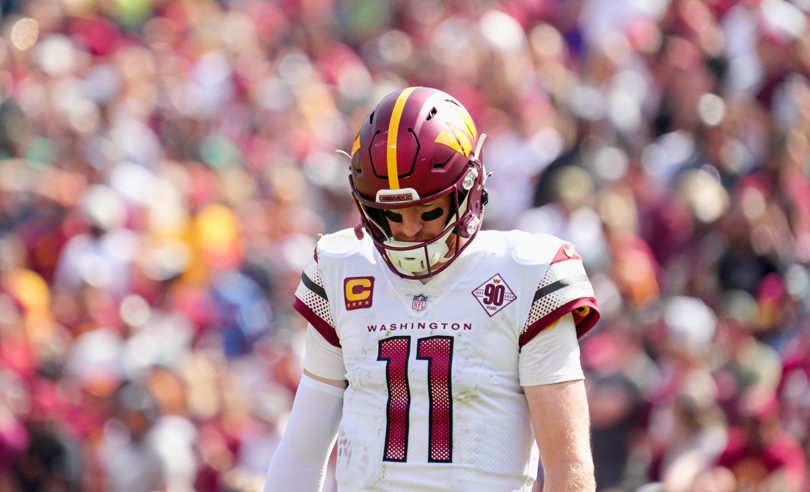 Week 6 in NFL pick’em contests has arrived. The Houston Texans are no longer winless after their 13-6 victory over the Jacksonville Jaguars on Sunday, while the Philadelphia Eagles remain the NFL’s lone remaining unbeaten team. The 4-1 Dallas Cowboys will put that record to the test on Sunday Night Football this week, though.

We plan to periodically update to this post through Sunday of Week 6, so check back for updates. Here’s what’s available now:

Below are some picks initially setting off the value radar for Week 6 in game-winner-based NFL pick’em contests. Things are bound to change as kickoffs near, but it’s worth keeping an eye on them.

The public—and apparently Ron Rivera—are really down on QB Carson Wentz in Washington. That puts us in a position of backing the Commanders again.

The value picks have been mostly hot this year, but Washington has been an exception in recent weeks. Last week, the Commanders came up just short on the goal line with a chance to beat Tennessee as a really unpopular toss-up pick.

The Commanders are again a toss-up this week, but only 25% of the public is picking them. That means Washington should be part of your weekly prize leverage plays, because its chances of winning against the unimpressive Bears is better than the public thinks.

Arizona is coming in as a value favorite on the road at Seattle this week.

The Cardinals came within a missed field goal by replacement kicker Matt Ammendola of going to overtime with the Eagles last week, but they still lost. The public is reacting to that 2-3 record.

Seattle again had a high-scoring game at New Orleans, but it came up on the wrong end. Seattle’s offense has been a pleasant surprise, but its defense has been the worst in the league, so Arizona should be able to move the ball.

Take Arizona as the betting favorite since the public is more evenly split on the outcome.

This is shaping up to be the Andy Dalton revenge game if Jameis Winston is still out for New Orleans.

The Saints exploded for 39 points last week thanks to three Taysom Hill touchdown runs. Cincinnati, meanwhile, has been a bit off on offense, playing every game close to the vest.

The Bengals have now lost three games on a last-second field goal, but the offense also hasn’t been clicking. They are struggling to run the ball, and they haven’t been explosive on offense (they have not had 400 total yards in a regulation game yet).

Add it all up, and the Saints are a decent option to win in what is a toss-up game, but the public is picking them less than a third of the time right now.

When we last saw Denver, they were embarrassing themselves on Thursday Night Football. QB Russell Wilson really struggled in the game, throwing a pair of key interceptions and then missing the final pass in overtime on the goal line.

But this is the NFL, where you have to go against the popular narratives. And right now, the public seems to believe Denver is really bad and the Chargers are good.

This pick rate for the Chargers is extreme for a team not favored by more than a touchdown. That creates a high-leverage opportunity in weekly pools for taking the very unpopular Broncos in an AFC West showdown.

This one doesn’t quite count as a value favorite pick, but it’s close. It should still be part of your game-winner pick strategy.

The Browns are coming off a close loss to the Chargers in their roller-coaster season. They are now 2-3, but four of the games have come down to the end.

The Patriots, meanwhile, bounced back in a big way, shutting out the Detroit Lions to win QB Bailey Zappe’s first start. But they still only scored one offensive touchdown in that win, and staying with the favored Browns at home is a better value proposition right now.

Week 5 was a dominant one for our spread picks. The game-winner picks were solid, but a couple of key late results prevented them from being even better.

In game-winner pools, the public averaged 9.8 wins in Week 5. There were more big favorites this week, which meant fewer opportunities to differentiate without taking on far more risk. With that said, we saw bigger favorites Green Bay, Jacksonville, and the Rams all lose.

Overall, the season-long “Max Profit” picks finished ahead of the public at 10.4 wins. Results like New Orleans and New England winning were the difference there.

Weekly picks finished even with the public at 9.8 wins. Those results could have been much better. Two of the biggest leverage plays, Washington and Cleveland, both went against us with late plays that decided the outcomes in close games.

After a winning week in Week 4, the public crashed down to earth in Week 5, finishing with only 7.1 wins on average. Larger favorites were popular but often failed to cover, even if they held on or came back to win the game. Teams favored by five or more points went 3-7 ATS in Week 5.

Our pick recommendations had a fantastic week, averaging 11.1 wins in season-long max-profit picks, four games better than the public. Meanwhile, weekly picks, which tend to also account for public pick popularity more to differentiate, averaged 12.0 wins, nearly five wins better than the public. Based on that, we expect to see high reported weekly win rates this week in spread pools.