Week 2 of the 2022 NFL season is what we like to call Overreaction Week. That means value picks, and here are some for pick'em contests. 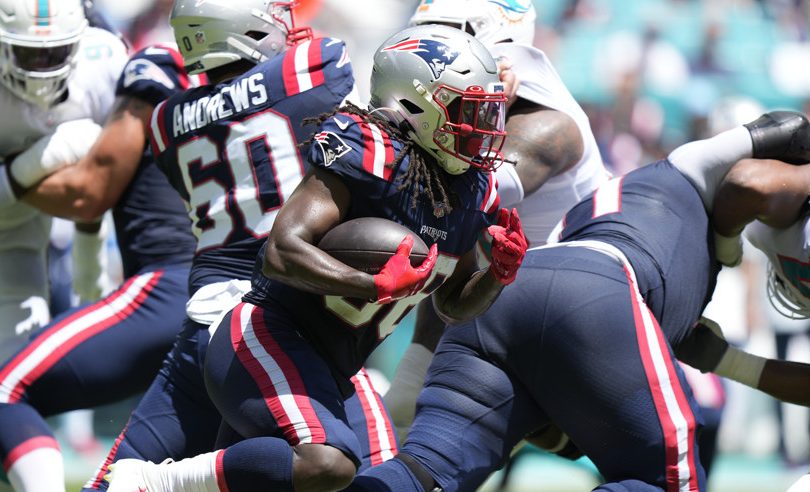 We move on to Week 2 in NFL pick’em contests after a wild and wacky opening week.

This week is often ripe for opportunity, as there can be big swings in public opinion based on only one result. We like to call it Overreaction Week. But that presents opportunity.

We plan to periodically update to this post through Sunday of Week 2, so check back for updates. Here’s what’s available now:

Below are some picks initially setting off the value radar for Week 2 in game-winner-based NFL pick’em contests. Things are bound to change as kickoffs near, but it’s worth keeping an eye on them.

This is quintessential overreaction-week stuff, and it provides a great value play in Week 2. The Patriots lost at Miami and looked bad. The Steelers upset the Bengals.

The Patriots are still the favorite in this one, but the public is picking the Steelers to win in overwhelming numbers.

After their loss Sunday, the Patriots are 9-14 SU and 8-14-1 ATS in Miami under head coach Bill Belichick. We’ve seen plenty of Week 1 overreactions about them over the years, though. (My favorite is when Tom Jackson said “they hate their coach” after a 31-0 loss to the Buffalo Bills to start the 2003 season. The Pats went on to win 17 of their next 18 games en route to the Super Bowl.)

Meanwhile, the Steelers were horrific on offense with quarterback Mitch Trubisky under center. They nearly lost a game in which they were plus-five in turnovers and the opponent repeatedly missed kicks because the snapper got hurt. Trubisky averaged only 5.1 yards per pass attempt. Meanwhile, RB Najee Harris suffered a foot injury, although he says he plans to suit up against the Patriots.

The Steelers beat the Bengals because the defense generated so many big plays. However, reigning Defensive Player of the Year T.J. Watt is now out with a torn pectoral that he suffered late in the win over Cincinnati.

There are lots of reasons to think the Steelers are nowhere near as good as their win over the Bengals suggests. You are getting a ton of value here with the public all over the underdog.

The Saints are only a slight underdog at home against Tampa Bay, while the public is picking the Bucs heavily coming off their big Sunday night win in prime time. (You can usually find value by going against teams that looked good in a standalone game the week before.)

No team has frustrated Tom Brady more in recent years than the Saints, which is reflected in this betting line. The Bucs are just 1-4 against New Orleans with Brady at QB and have averaged only 16.6 points in those games.

Given that you can take a small underdog here at low popularity, the Saints present a compelling value gamble to consider.

You rarely see a team with win odds greater than 70% show up as a value favorite, where the public is picking them at a lower rate than their win odds. We aren’t quite there with San Francisco, but we are close, and the week is still young.

Seattle is yet another example of the prime-time phenomenon. The Seahawks beat the Denver Broncos in Russell Wilson’s hotly anticipated return to Seattle on Monday Night Football, while San Francisco lost the opener with Trey Lance at QB, mustering only 10 points in a monsoon in Chicago.

According to our models, the Niners have the fourth-highest win odds this week, but eight teams are being picked at a higher rate than they are. The Steelers, an outright underdog, are nearly as popular as San Francisco.

The oddsmakers (and our models) are most likely right, while the public is far too willing to pick an upset off last week’s scores. The Niners outgained the Bears 331 to 204 last week, but they lost because they made key turnovers and failed to stop the Bears on the few drives that they actually did anything. Seattle was outgained 432 to 267 but won against Denver because the Broncos fumbled twice on the goal line and repeatedly blew opportunities.

Over time, you will maximize your results if you pick the teams that will have more yards and pick against those that won’t. And right now, Seattle seems like an upset that a chunk of pools are willing to pick.

Don’t join them, because there is no value here on taking Seattle.

The Eagles and Vikings both got off to impressive starts. The Vikings’ victory was notable since it was against the Green Bay Packers, while the final margin in the Eagles’ win does not reflect the game flow. (The Detroit Lions scored late to get the backdoor cover.)

Philadelphia rolled up 455 yards and 27 first downs in the first game with star WR A.J. Brown in the fold. That means this game has all the makings of an offensive shootout on Monday Night Football.

Right now, you can get the favorite while a majority of the pool is going the other way, presenting some slight value.

If you are looking for a bigger upset to take in weekly contests, especially larger ones, the Jets are your high-leverage play this week. If you just looked at the scores last week compared to expectations, you can see why the public is overreacting to this one.

The Jets were the one big underdog who lost comfortably in Week 1. The final score was Baltimore 24-9, but dig a little deeper, and it was a lot closer than the score would suggest.

You know who isn’t likely to hit a 50-plus-yard bomb in this game? Browns QB Jacoby Brissett, who is the very definition of a game manager. Brissett averaged 4.3 yards per attempt in the win over the Carolina Panthers in Week 1 and averaged 5.7 yards per attempt last year in Miami.

The Jets have a better chance to win this game than the public thinks, as the Browns are not good at passing the ball and creating big plays in the air.

Week 1 got off to a great start for game-winner pools, as several of the value plays that we were seeing by Sunday hit. It was also a wild week with plenty of big upsets, as over half the teams favored by at least five points lost.

In game-winner pools, the public averaged 8.4 wins in Week 1, so a typical entrant picked barely over half the games correctly.

Most of the big upsets were extremely unpopular, so few entries got wins in games where the Broncos, Bengals, Titans, and 49ers lost.

Meanwhile, our picks hit on a lot of the smaller favorites that were coming in with more split popularity. Our weekly picks also hit on some key upsets, notably the Giants over the Titans. The Vikings beating the Packers (after becoming the late favorite) was a big result as well since the public was heavily on the Packers.

Overall, both the season-long “Max Profit” picks (10.8 wins) and weekly picks (10.9 wins on average) outperformed the public by more than two wins. That means we should see a healthy weekly win rate, and season-long entries should be in a good position after one week.

The public was below .500 this week in spread pools, averaging 7.3 wins in 16 games. Bigger underdogs prevailed at a high rate, as with all the upsets, underdogs of 5 or more went 7-2 ATS in Week 1.

Two of the three most popular public picks, the Broncos and Titans, lost outright as favorites.

Our pick recommendations matched the public across all 16 games and averaged 7.3 wins in season-long max-profit picks. Meanwhile, weekly picks, which tend to also account for public pick popularity more to differentiate, averaged 9.2 wins, putting them solidly above the public.

In “pick 5” type spread pools where entrants do not pick every game, the results were also likely better for PoolGenius subscribers on average. The individual games recommended depends on specific lines in those contests, but our top two model plays for Week 1, Pittsburgh and the NY Giants, both won outright and were unpopular, but likely part of most Pick 5 sets.