Week 2 is Overreaction Week, which presents lots of value opportunities for your pick'em pools if you can stay steady and calm. 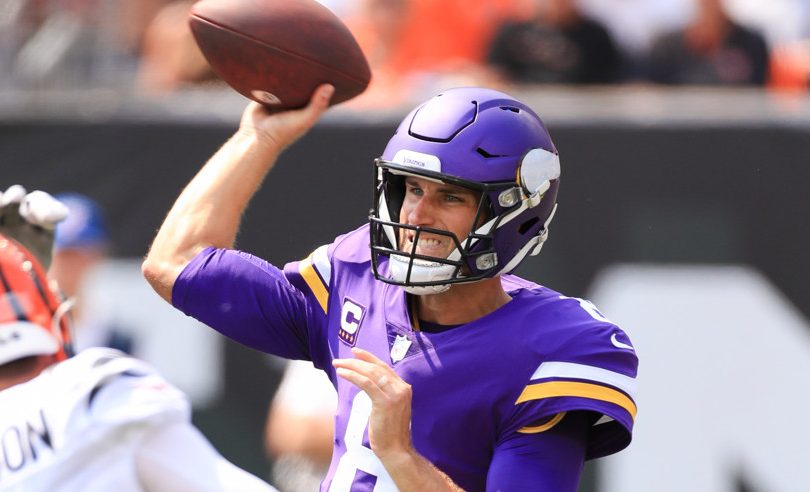 Do you smell that? It’s the smell of opportunity wafting through the air as we head toward Week 2 of the 2021 NFL season.

This is Overreaction Week, where the public goes overboard in reacting to what they just saw.

Below, we’ll explore strategies to maximize your edge in NFL and college football pick’em contests. We also provide some of the rationale behind picks potentially recommended by our product.

We will continue to add to this post until Sunday of NFL Week 2 arrives, so check back for daily updates. Here’s what’s available now:

Week 1 of the 2021 NFL season featured a ton of upsets. Against the most common closing lines, underdogs went 12-4 against the spread.

Since the public tends to lean heavily on favorites in spread pools, a contrarian strategy likely proved profitable.

In game-winner pools, the high number of underdog wins will lead to some low opening-week win totals across the board, so don’t freak out early if you don’t have a lot of wins. Using public pick averages, the average public entry got 8.4 wins in Week 1 out of 16 games. When a few publicly popular small favorites win (Seattle and Carolina) and a lot of others lose, our recommendations are going to also come in lower, averaging 7.7 wins.

In spread pools, out subscribers likely had a very good week. The public was picking every favorite more than half the time ATS, and Green Bay (77% popularity) was the public’s most popular spread pick. The public averaged only 6.9 wins in spread pools out of 16 games. Meanwhile, our pick recommendations averaged 9.0 wins across both weekly and season-long contests, and 10.0 wins in weekly spread contests.

Some teams laid big eggs in Week 1, and others surprised. If some of those same results happened in the middle of the season, they would be just blips on the radar. But right now, they are all that many of your opponents are reacting to when picking.

That leads to prime opportunities to zig when your opponents zag.

We’ve been collecting weekly win data from our subscribers since 2014. Our subscribers have averaged a respectable 7.9% win rate in weekly contests in Week 1, but that has shot up to 16.5% in Week 2. That’s the single-highest week all year in terms of reported win rates.

In three of the last seven years, over 20% of our weekly prize subscribers have reported winning a prize in Week 2. Here’s where we give the obligatory disclaimer that past results are not indicative of future performance.

But we aren’t here claiming to have some secret sauce or ability to see the future in Week 2. The key is just letting your fellow poolmates overreact to one week of results, stay steady, and trust the numbers. Week 2 provides some opportunities because of public reaction to one week of results. That is demonstrated this year by the vastly different pick rates for teams with very similar point spreads.

For example, nine Week 2 games feature a point spread between 3.0 and 4.5 points. But the popularity of the favorites range from 92% (Arizona) to 42% (LA Chargers).

Here are some early value options for the games in that range:

The Vikings lost in overtime to Cincinnati in Week 1, while Arizona blew out Tennessee on the road. So the public is hammering Arizona in this one, but the spread is only 4.5 points.

This is the start of a theme. The public overvalues Week 1 results, which are already included in the Week 2 point spreads.

The Colts just lost at home to Seattle. The Rams played in primetime on Sunday Night Football, beating the Bears by 20 points.

The case for value here is similar to Minnesota. The public is so low on these two moderate underdogs that they present an interesting value gambit in weekly contests.

Using the win odds, there’s a 14% chance that both Indianapolis and Minnesota win, but only about 8-in-1,000 entries would be expected to pick both based on public popularity. Getting risky with both picks wouldn’t be advised in a season-long pool, but in a large weekly contest, leveraging those kind of scenarios is how you can maximize your win rate when the chances of winning the pool are low to begin with.

At the other end of the spectrum, the Chargers have nearly the same win odds as the crosstown Rams, but they’re being picked by less than half the public.

The public is in the “love” phase of the love-hate relationship with ‘dem Cowboys in Week 2.

The Bears lost in primetime in Week 1 by 20 points. The Bengals won. So the public is slightly favoring the Bengals in this one even though the Bears are the betting favorite.

These are just some of the examples from this week, but there is a pretty clear reaction by the public to (a) who won and lost in Week 1, and (b) what happened in primetime games. That isn’t unusual, and it provides value opportunities if you can be a little more grounded and trust the betting market.

Cleveland as a Top Confidence-Point Play