NFL Week 2 features a wildly unpopular favorite, plus several other value picks thanks to the public overreacting to last week's results. 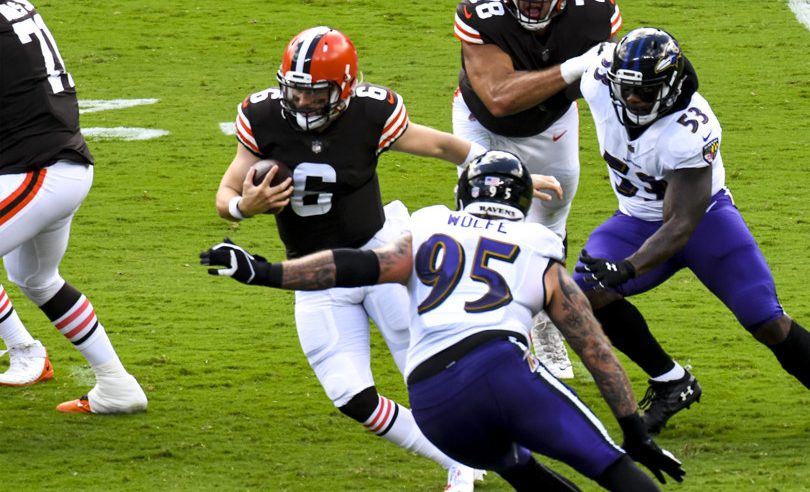 The opening week of the 2020 NFL Season provided plenty of action, some big upsets, and some wacky endings. Those types of results can lead to opportunities for NFL Week 2 value picks when the public overreacts to the events of one week.

The analysis below should help you make smarter picks in your private NFL office pool or in online contests like ESPN Pigskin Pick’em, Yahoo Pro Football Pick’em, and CBS Sports Football Pick’em.

Read on for our value-driven NFL Week 2 pick advice.

Talk about starting off on a rough note — last week was brutal for value picks and playing against the public in general. We highlighted one large favorite (the Colts, who were one of three big upset victims), two moderate favorites (the Lions and Vikings) the public was picking at a lower rate than their odds to win, and two value upset picks to consider for weekly contests (Falcons and Bengals).

Based on objective win odds, one would have expected about 2.8 wins on average out of those five teams. We got zero, for the first time in recent memory. The luck was simply brutal; the five teams we highlighted combined to turn the ball over 9 times and miss 3 field goals, compared to their opponents, who had zero turnovers between all five of them (!!!) and just one missed kick.

The Colts statistically dominated the Jags but couldn’t score in the second half. The Lions blew a 17-point fourth quarter lead, then dropped a game-winning touchdown with seconds to go. The Bengals drove for a game-tying field goal in rookie Joe Burrow’s first game, only for the kicker to miss a 31-yard attempt. It was definitely a day where the breaks were beating the boys.

On the positive side, even with those value picks completely missing the mark, the overall performance of our  Football Pick’em Picks product was about in line with the public for season-long game winner pools. Our recommended picks to subscribers averaged 8.6 wins on picks in those pools, versus 8.7 wins on average for the public. (The Colts were still heavily picked nationwide, picks on the Lions and Vikings were more evenly split, and we avoided the biggest upset picks for that pool format.)

So it wasn’t a crushing blow by any means, and our luck will likely even out over the course of the season. Here are some real world examples of why you need to stick to a solid strategy even through sub-par weeks.

The Week 2 pick opportunities highlighted in this article are based on data from our Football Pick’em Picks product, which provides objective game predictions and projected opponent picking trends for every game.

Note that we are not saying that you should make all of the picks we list below — the upset picks especially. The best Week 2 picks for your NFL pool depend on strategy factors such as your pool’s size, rules, and prize structure, plus situational factors like your current place in the standings and the number of weeks left.

What we are saying is that the teams mentioned in this post provide some of the best opportunities to differentiate your Week 2 picks from your pool opponents, by taking on only a modest amount of risk, or no additional risk at all. We also call out matchups where picking an upset is probably a terrible idea.

Big Favorite At A Reasonable Price

The pick below may not be significantly underrated by the public, but compared to other big favorites this week, it’s a relative bargain in terms of pick popularity. Think twice about picking against it; there are much smarter upset pick opportunities elsewhere.

Tom Brady looked like someone who retired to Florida in the season opener, throwing two interceptions (including a pick-six) in the loss at New Orleans. Carolina was competitive in a home loss to the Raiders in head coach Matt Rhule’s debut. So it’s understandable that some players are picking the upset here in Week 2.

However, Tampa Bay is favored by 9 points, tied for the largest line of the week, and our models have them with the second-highest win odds behind only Kansas City. Yet there are five other teams being picked more heavily than the Bucs (who are at 91% pick popularity) in Week 2.

If you are going to take a long-shot bet on an upset, there are better options on the Week 2 slate that are both less popular upset picks, and favored by fewer points as well. In fact, we’ll highlight one below.

2020 NFL Week 2 features several favorites that the public is picking at a lower rate than their chance to win. These types of teams are as close to no brainer picks as you can get in NFL pick’em contests, since you can take the team that’s expected to win, yet still “fade the public” (in relative terms, at least) at the same time.

The Browns got killed on opening day by the Ravens, managing to score only 6 points. The Bengals were competitive against the Chargers. That’s the formula for a trendy Week 2 upset pick, when the public reads too much into opening week results. In a case like this, you can find value just sticking with the favorite.

Cleveland is favored by 6 points in this game, with 70% win odds according to both the betting market and our models, while the public is picking them 68% of the time. That means you can take the more likely winner and gain ground on 32% of a typical pool if the favorite prevails.

Yes, that requires putting some faith in the Browns, but how they looked last week (against one of the two best teams in the NFL, in the first game for head coach Kevin Stefanski) is very public knowledge already being factored into the betting odds. In short, it’s too early write off Cleveland in 2020.

Speaking of jumping off bandwagons, the public has completely bailed on the Colts in Week 2, after their crushing road loss at Jacksonville. You can be there to cash in on overreaction this week by simply staying the course.

About 75% of the public so far is picking Minnesota in this game. Yet the Colts are actually 3-point home favorites in this game in the betting markets, with 56% win odds according to our projections. It’s rare to get a favorite of this size that is this unpopular, so you need to jump the opportunity when it presents itself.

And again, yes, this does require trusting Philip Rivers not to have another frustrating game. But of the two performances last week, Minnesota’s was more concerning in their inability to protect Kirk Cousins early, and how easily Aaron Rodgers carved up the defense. Indianapolis’ loss was more the result of failing at some key moments on high leverage plays, but they gained a lot of yards while holding the Jaguars under 300 total yards.

Here’s another case of a wild swing in popular opinion (as reflected by pick popularity) after just one week. The Eagles were a very popular pick last week, before losing at Washington in embarrassing fashion. At the same time, the public was strongly supporting Dallas on the road at the Rams, but Los Angeles won by a field goal.

A week later, 68% of the public is taking the Rams, on the road, against a Philadelphia team looking to bounce back. The point spread in this one is currently the Rams -1, while our win odds have this one as a 50% toss-up game.

According to NBC Sports, offensive tackle Lane Johnson has already said he’s playing in Week 2 after sitting out the opener. His absence was likely a factor in QB Carson Wentz struggling and getting sacked 8 times by Washington. Add in that RB Miles Sanders could return, and you could see a different Eagles team in Week 2.

If you’re going to make a gamble on an underdog, you need to make sure that the potential reward if you get it right — that is, how much your odds to win your pool will increase — is big. Take a bunch of extra risk to make a super trendy upset pick, and the joke is really on you.

The pick below is definitely not appropriate for all pools. If you’re in a smaller, season-long pool, it’s probably not worth the risk. However, it should be seriously considered for single-week contests or if you only care about weekly prizes in your pool.

Detroit has only 29% win odds in the betting markets and 33% win odds according to our models — so this one is most definitely a gamble.

You also probably don’t need to take on this quite much risk in a small to mid-sized weekly prize pool, just because the dynamics of this particular Week 2:

However, if you are in a large national contest pool (say over 100 entries) competing for a winner-take-all weekly prize, let’s lay out the case for Detroit. For those familiar with poker, you are getting great pot odds on the Lions in a long shot pool where you chances of winning are low because of pool size. Only 2% of the public is taking the Lions in Week 2.

That is the lowest pick popularity on the board, but the Packers aren’t the biggest favorite, or even close to it, in Week 2. There are currently eight other games with a higher point spread than Packers -6.

Yes, it’s hard to trust the Lions after last week’s debacle. Yes, their cornerbacks are decimated, and we will wait to find out who will be active in the secondary. And yes, Green Bay looked great last week as Aaron Rodgers lit up the Vikings. All of that information is public. It’s also no doubt playing strongly into the public’s perception that the Lions have no chance, while the objective win odds hover closer to 30%.

Get All Our NFL Week 2 Picks For Your Pool

Once you know the best value opportunities of Week 2, you can typically increase your odds to win your pick’em pool by taking a calculated risk or two (or more).

If you’re in a confidence pool, for example, it may be wise to bump up the number of confidence points you assign to a value pick like Indianapolis or Cleveland, or perhaps take even more risk on a team like Philadelphia.

There are a lot of decisions to make, which is why we built technology to do all the data gathering and analysis. Based on algorithms we designed, our Football Pick’em Picks is the only product that customizes weekly pick recommendations based on the key strategy dynamics of your pick’em pools. Among other things, the product: