The Week 17 Pick'em value picks include several key AFC games, including Miami at Tennessee and Kansas City vs. Cincinnati. 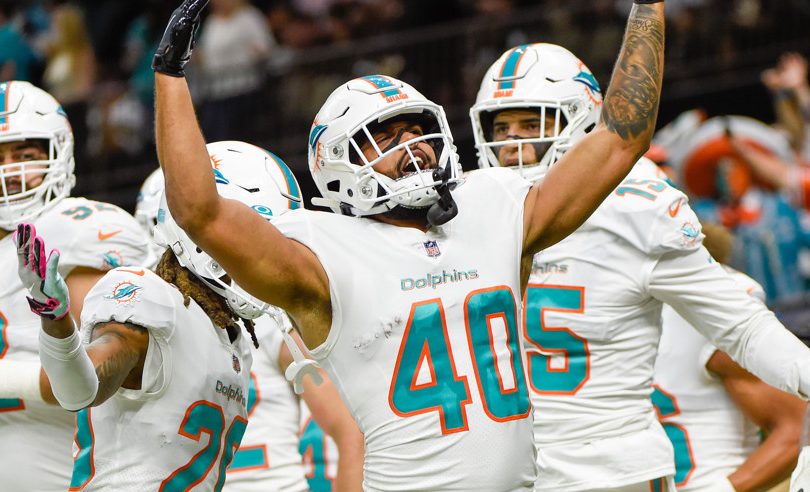 Here, we’ll track Week 17 news and discuss the implications for maximizing your edge in NFL and college football pick’em contests. We’ll also provide some of the rationale behind picks potentially recommended by our Football Pick’em Picks product.

We will continue to add to this post until Sunday of NFL Week 17, so check back for daily updates. Here’s what’s available now:

Here’s our early look at some potential value plays in NFL pick’em pools for Week 17.

The Browns and Steelers meet in an elimination game in the AFC North. The victor will keep hope alive of winning the division if the Cincinnati Bengals lose to the Kansas City Chiefs on Sunday, while the loser will be in trouble.

The Browns have had their share of player absences and close calls recently, but they have played better than the Steelers this season. Pittsburgh is 7-2-1 in one-score games, while Cleveland is only 4-6. Those differences make their overall records very similar.

But Cleveland is the road favorite here, and with the public nearly evenly split, stick with the Browns to gash the Steelers’ porous run D.

Ryan Tannehill will face off against his old team in a surprisingly key AFC matchup. The Titans are still alive to get the top seed in the conference, while the Dolphins moved into the final playoff spot with their Monday Night Football blowout of the New Orleans Saints, but they need to keep winning.

The Titans continue to get a lot of respect from the public, so the Dolphins are coming at some big value here in weekly pools to pull off the upset.

The Chiefs aren’t a value favorite, but relative to some other picks, they are still worth slotting in here as a favorite play. The Rams, Titans, and Chargers all have similar win odds as Kansas City but higher popularity.

So go with the Chiefs in this AFC showdown as they go for a ninth straight win, against a Cincinnati team that is also playing well and drawing some public confidence in the upset.

Similar to the Chiefs, the Eagles are a reasonably priced favorite when you consider how much of the public is picking other teams favored by just over a field goal.

Philadelphia is catching a Washington team that appears to be in disarray. Meanwhile, the Eagles have won five of their last six games to pull into the final wild-card spot in the NFC.

So stay with the Eagles in season-long pools and bump them up a bit in confidence value.

If you’re looking for another upset in addition to the Dolphins, consider the Ravens as an option.

Baltimore should be a lot better off on offense if it gets QB Lamar Jackson back after two weeks off due to his ankle injury or backup QB Tyler Huntley returns from the reserve/COVID-19 list.

The Ravens secondary is still an injury-riddled mess, which is why they’re a home underdog here against the Rams. But Baltimore is a well-coached team playing for its playoff life at home against a West Coast team, and it’s coming at low popularity right now.

Week 16 was a rough one. Every close value-play outcome seemingly went the other way, giving back some of the gains that our picks have been steadily making over the last month.

Favorites and blowouts also dominated in Week 16 as teams continued to be impacted by COVID-19.

In game-winner pools, the public averaged 10.6 wins in Week 16. The biggest upsets were the Chargers losing to the Texans and Seattle losing to Chicago.

The two most popular spread picks did not cover, as Green Bay won by only two points against Cleveland and the Chargers lost outright to Houston. Both of those teams were drawing 80-plus percent of pick popularity.

After that, though, the more popular public side (especially if tied to big line moves) covered. The public averaged 8.6 wins in spread pools.

Our season-long recommendations averaged 6.6 wins, while the weekly pick sets came in ahead of that at 8.2 wins.

The biggest negative results were a combination of the same toss-up games that impacted game-winners (Las Vegas, Jets) and several bigger favorites covering the spread.

With the adjusted protocols, there is a chance he could return by Sunday if he shows no symptoms and tests out. Otherwise, Sam Ehlinger will start for Indianapolis.

The Colts are currently a 6-point favorite against Las Vegas, but that number will likely adjust depending on final confirmation of Wentz’s status. If he is out, expect the spread to shrink, potentially providing some value on the Raiders.

Meanwhile, Lamar Jackson has returned to practice after missing two games with an ankle injury. However, given his style of play and need for mobility to be more effective, there’s still no guarantee that he’s healthy enough to return to game action.

That’s another scenario we will keep an eye on as we approach Sunday.

Picking against the New York Giants may be a hard habit to break for the public, as Chicago leads all teams in spread popularity this week.

If you leave me now after all of these Chicago puns, just know that this week will be no Saturday in the park.

If you’re trying to go against the public, here are the most popular picks for Week 17:

We have 15 games today, with no games having been played yet this week. That’s the most we’ve had on a single Sunday all season.

It’s also a Sunday with fewer “close” matchups. Tennessee (-3) is the smallest favorite today. The only other game with a three-point line is Cleveland vs. Pittsburgh.

Every single favorite except for Cleveland on Monday Night Football has public popularity greater than 75 percent, with half of them above 90 percent. Thus, the key swing game doesn’t come until after all of today has been finished.

Cleveland is the lone true value favorite this week. Given the higher win odds for most favorites, you have to pick your spots if you need an upset.

Cincinnati and Miami Are the Two Most Likely Upset Picks

Unless you’re in a trailing position where you need to take even more risk, the two most likely upset picks are Cincinnati (vs. Kansas City) and Miami (vs. Tennessee).

Both lines have moved in favor of the underdog, and the favorites have fairly high popularity (77% for both).

Green Bay is the most popular pick (83%) in spread pools. But the Packers have had significant line movement in their favor because Vikings QB Kirk Cousins is out after testing positive for COVID-19, so that popularity is understandable.

The Rams are the second-most popular, and they’ve also had line movement in their favor as Ravens QB Lamar Jackson is unlikely to play.

In many pools, you may be suggested picks to take advantage of line moves this week depending on your place in the standings. Other teams that have seen line movement in their favor include the Chargers, Eagles, Colts, and Bengals.

Our top model spread plays are Green Bay, Cincinnati, Buffalo, and Arizona, so you could see those teams featured in your picks.