The Week 12 Pick'em Pool outlook is a wild one, and it starts with three key games on Thanksgiving Day. 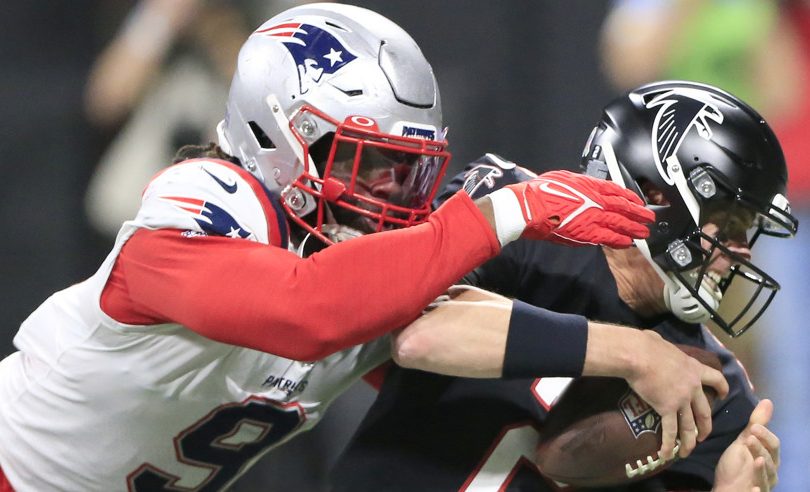 New England is a favorite against Tennessee in Week 12 (David J. Griffin/Icon Sportswire)

Here, we’ll track Week 12 news and discuss the implications for maximizing your edge in NFL and college football pick’em contests. We’ll also provide some of the rationale behind picks potentially recommended by our Football Pick’em Picks product.

We will continue to add to this post until Sunday of NFL Week 12, so check back for daily updates. Here’s what’s available now:

Here’s our early look at some potential value plays in NFL pick’em pools for Week 12.

This week is an interesting one. No team is favored by more than a touchdown, and 11 games involve a spread of -3.5 or smaller.

That means lots of differing opinions on whom to pick.

It’s pretty rare for a favorite of almost a touchdown to serve as a value favorite. But that’s what we have this week with New England, as the Titans’ record (8-3) and performance in other big games is driving enough upset picks in their favor.

Our projections have New England with the second-highest win odds of any team this week, but the public is picking seven other favorites more frequently. That makes for the best of both worlds: getting a favorite with higher win odds while a chunk of the pool is going the other way.

So, stick with New England in game-winner pools, and use them at higher confidence in confidence-point pools.

The Rams got a week off after their two-game losing streak to Tennessee and San Francisco. The Packers are coming off a loss last week to the Vikings, and QB Aaron Rodgers aggravated his toe injury in that game.

Right now, this one is basically dead even in the betting markets, but the public is taking the Packers at a two-to-one ratio. That means value in weekly pools by taking the less popular side.

The Los Angeles Chargers are a popular pick this week after their Sunday Night Football win over the Pittsburgh Steelers. About 78 percent of the public is taking them.

However, Denver is only a 2.5-point underdog here. Our models are a bit more positive on the Broncos’ chances relative to the betting markets.

As a result, Denver is the highest-leverage upset play on the board this week.

Ordinarily, a mediocre team like the Bears with 69 percent popularity wouldn’t be a particularly good value play, but this is not a typical week. The Bears are the ninth-most popular favorite right now, but only four other teams are favored by more points this week.

As a result, sticking with the favored Bears on Thanksgiving Day in the showdown between Andy Dalton vs. Tim Boyle at quarterback seems like the value play.

The Jacksonville Jaguars are in another near-toss-up game where the public is leaning toward the other team.

Both the Jaguars and the Atlanta Falcons are in the bottom quarter of the league, and Atlanta’s offense has been struggling since star WR Calvin Ridley has been sitting out for personal reasons.

Neither of these teams is a particularly attractive pick, but in this matchup, going against the majority of the crowd gives you some value.

Week 11 gave us a big upset (Tennessee), and plenty of blowouts, including a surprise blowout in Buffalo. Some popular picks lost and failed to cover, again leading to an overall positive week across pools.

In game-winner pools, the public averaged 8.9 wins in Week 11.

The public was more heavily on Arizona against Seattle, even though Seattle had moved to the betting favorite by kickoff with QB Kyler Murray still out. So Arizona winning that game was a relatively high-leverage result in favor of the public.

However, several small favorites who were not overly popular and where picks were split won in Week 11. That included Kansas City over Dallas, Cincinnati over Las Vegas, and by kickoff, Philadelphia over New Orleans.

Meanwhile, the highest-value upset play, Minnesota (+1) vs. Green Bay, won, so the public took a relative hit there.

Overall for Week 11, our season-long “Max Profit” picks averaged 9.9 wins, and the weekly picks averaged 10.5 wins. The Vikings’ upset will be a factor and could lead to above-average weekly win rates for subscribers.

The public again finished below .500 on average in spread pools, averaging 7.4 wins in 15 games.

Our model picks had a very good week. Three of our top for model plays won, including the Houston upset of Tennessee, the Colts’ upset of Buffalo, and San Francisco’s 20-point win over Jacksonville.

First, an early heads-up. We are not planning on an update tomorrow unless there’s some emergency news, in which case we’ll add a quick note.

With travel for the holiday and the early game time for the Detroit-Chicago matchup, we thought it would be better to go over the Thanksgiving games today. So make sure you get your picks in for these games before you start your food prep and family time.

The Bears are favored by three points, with 59 percent win odds and 70 percent popularity. We are still waiting on official word on the Detroit QB situation.

The latest reports suggest Jared Goff could return after he missed Sunday’s game with an oblique injury. There also may be a sense of urgency given that Tim Boyle was terrible in his first career start.

Goff’s status could impact the game spread and win odds enough to shift some picks on the margins and in spread pools. Try to check early tomorrow for our pick recommendations, as we should know if Goff is playing by about 10 a.m. ET, if not sooner.

Dallas is the largest favorite of the week and most popular pick, facing Las Vegas. The Cowboys do have some offensive injuries/absences, though there’s some optimism that WR CeeDee Lamb could play, and OT Tyron Smith was a full participant at Tuesday practice.

Dallas will be the pick in game-winner pools and at higher confidence if you are in such a pool. The spread pick could depend on any late line movement.

Thanksgiving night closes with the Bills traveling to New Orleans. The line in this one has moved from an opening of 4.5 points to now 6 points for Buffalo.

In spread pools, you’re more likely to be recommended to take that line value if your contest line is based on the opening number.

Buffalo should also be the game-winner pick in most pools, as there are plenty of other underdogs in weekly prize situations at better win odds than the Saints.

Here are your post-Thanksgiving College Football value picks for this weekend.

There hasn’t been much change in the landscape as we head toward Sunday. We have seen some slight line movement in a couple of games, though.

Carolina has continued to move and is now a 2.5-point favorite in a game against Miami that opened early in the week as Carolina +1 (and immediately moved to Carolina -1). That pushes Carolina toward being the game-winner pick, and the line movement also increases the chances you could get the Panthers as the recommendation against the spread.

Pittsburgh got some good news in that LB T.J. Watt will play, and S Minkah Fitzpatrick is coming off the COVID list. That dropped the spread in the matchup against the Bengals, though Cincinnati is still favored by 3.5 points.

Week 12 is one of the wildest weeks in recent memory, with lots of bad teams playing each other, and lots of playoff contenders matching up. That makes for a very balanced week and plenty of games where the public is going to be more divided on the outcome.

The biggest favorite of the day rarely also comes at pretty high value, but that’s what we have when New England plays Tennessee.

The Titans still have the best record in the AFC, so enough of the public is on them in this one. However, they’re without RB Derrick Henry, WR Julio Jones, and WR A.J. Brown for this game, leaving QB Ryan Tannehill with a depleted skill-position cast.

The Patriots are favored by seven points, making them the largest favorite today, but their 78 percent pick popularity is only the fifth-highest today.

L.A. Rams Are in a Key Swing Game

One of the higher-leverage games this week is the showdown between the Rams and Packers. The Rams have moved to being a one-point favorite, but 65 percent of the public is on Green Bay.

Denver Is the Highest-Value Upset Play

Denver looks like the most frequent upset recommendation right now. The Broncos are only a 2.5-point home underdog against the Chargers, but only 20 percent of the public is picking them.

Some other upset plays you might see in weekly contests:

There isn’t a hugely popular team with over 75 percent pick popularity this week, but there are a couple of moderately popular spread picks.

You also may see picks taking line value based on significant line movement this week. Picks you may see because of line value versus common contest lines include Carolina, New England, and Pittsburgh.

Our top model plays include New England and Houston, so you might also see those two recommended more heavily.