Week 10 of the 2022 NFL season is here, and we have several value favorites showing up in your pick'em pools. 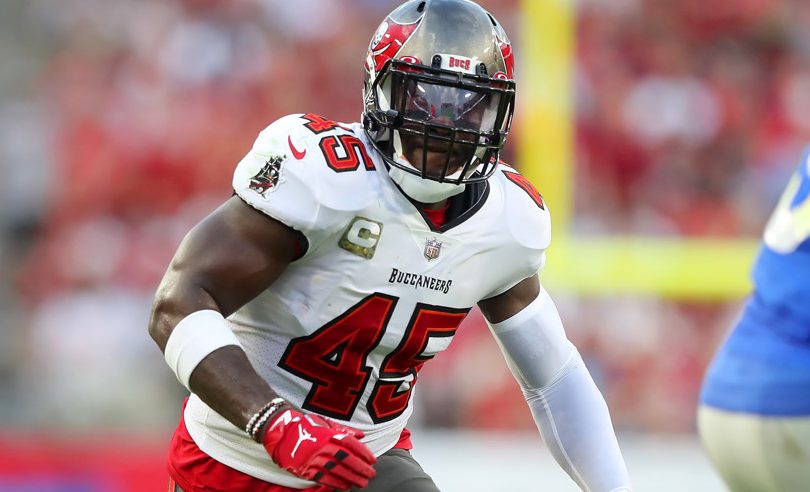 The Buccaneers face the Seahawks in Germany (Cliff Welch/Icon Sportswire)

Week 10 in NFL pick’em contests is here, and it features plenty of big news and big matchups. Bills QB Josh Allen’s elbow is a problem, which will be a big factor in this week’s outlook.

We plan to periodically update to this post through Sunday of Week 10, so check back for updates. Here’s what’s available now:

Here are the value picks we are seeing as of Tuesday early afternoon.

Here are the value picks we are seeing as of early afternoon on Tuesday.

The Raiders are only 2-6, so you can understand why there is some hesitance to pick them this week and why more entries are willing to go with a Colts upset. However, Las Vegas is 0-5 in close games, which is notoriously fickle. The Raiders are also playing a Colts team that just fired head coach Frank Reich and replaced him with Jeff Saturday, who has no head coaching experience in college or the pros and has never been on an NFL staff as a coach.

Just as importantly, the Colts are sticking with Sam Ehlinger at QB. So far through two starts, Ehlinger has been sacked on 17.5% of his dropbacks and is averaging only 5.8 yards per pass attempt. The 2021 sixth-round draft pick does not look like the second coming of Tom Brady, and the line reflects that.

The Raiders still have decent popularity, but it’s relative. The Giants are being picked by 97% of the public at the same point spread. Miami, as a 3.5-point favorite, is being picked 93% of the time. Las Vegas is only the 10th-most popular pick this week to win despite being tied as the fourth-largest favorite.

Tampa Bay came within a late dramatic rally of losing its fourth straight game, but it was able to score a late touchdown to beat the Rams. Meanwhile, Seattle just won its fourth game in a row.

It’s understandable that the public would be leaning toward the Seahawks here. This game is being played on a neutral field in Germany, though, and the Buccaneers are still the slight favorite.

We’ll talk about these two together since they represent two very unpopular slight underdogs that can provide excellent contrarian value in weekly pick pools.

If you look at the win odds for each, you would expect about a 14% chance of both winning (and about a 46% chance they split, and 40% both lose). But the potential pot-odds edge in a weekly pool is notable in a larger pool.

Based on their pick popularities, you would expect only about six out of every 1,000 entries to pick both. If you are in a pool where your chances of cashing the pot are 1% or lower because of the number of entries, that provides a massive leverage play on that two-team parlay.

You can win weekly contests by picking unique combos and being one of the few entries that get those wins if they hit.

The payoff for a Detroit upset of Chicago may not be quite as high, but the Lions are still fairly unpopular and have slightly higher win odds. The Bears offense has been playing better in recent weeks, but they cannot stop anyone and recently traded away their two top defenders.

Taking a moderate chance here on Detroit is a decent value play in weekly pools.

The public has been getting the best of it recently after a cold start for them (and a hot start for us).

In game-winner pools, the public averaged 9.0 wins out of 13 games in Week 9, easily the best win percentage in a week for the public this year.

Overall, our season-long “Max Profit” picks finished just below the public at 8.1 wins. Weekly picks finished down this week at 6.6 wins, barely over .500, so there won’t be many weekly prizes claimed for Week 9.

The biggest swing results were Jacksonville over Las Vegas, Seattle over Arizona, and Baltimore over New Orleans, while only Tampa Bay over the Rams went the other way among higher-leverage games. The public picked up 2.6 wins on average across those four games, compared to 1.4 wins on average for our Max Profit season-long picks and 1.1 wins on average for the top weekly recommendations.

The public finished above .500 in Week 9 in spread pools, averaging 7.1 wins in 13 games. Baltimore, Minnesota, Philadelphia, New England, and Miami were the five most popular picks, going 3-2 ATS.

Our pick recommendations in season-long pools were down, averaging 5.7 wins in season-long max-profit picks. Meanwhile, weekly picks, which tend to also account for public pick popularity more to differentiate, finished just ahead of the public at 6.6 wins.