The Week 10 value picks include several upset options as the public overreacts to last week's results, including the Saints versus the Titans. 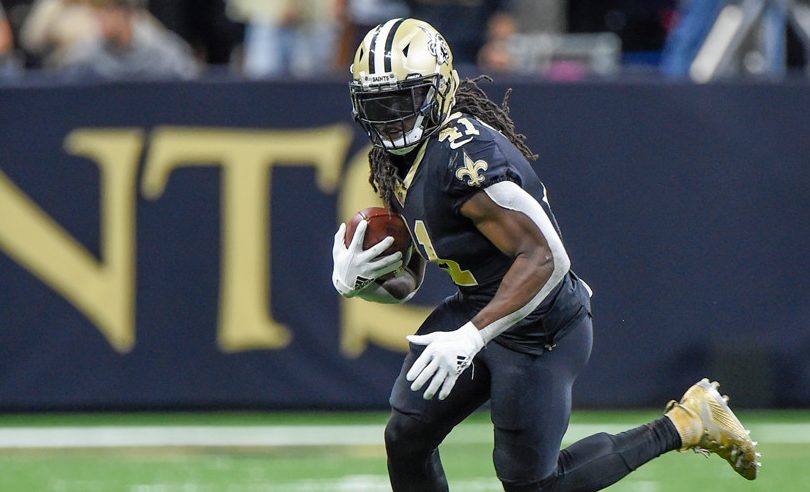 Here, we’ll track Week 10 news and discuss the implications for maximizing your edge in NFL and college football pick’em contests. We’ll also provide some of the rationale behind picks potentially recommended by our Football Pick’em Picks product.

We will continue to add to this post until Sunday of NFL Week 10, so check back for daily updates. Here’s what’s available now:

Here’s our early look at some potential value plays in NFL pick’em pools for Week 10.

The Titans are coming off a big prime-time Sunday night win over the Los Angeles Rams, while the Saints are coming off an upset loss to the Atlanta Falcons. So the public is heavily on Tennessee in this one, but the betting odds are far closer.

The Titans won last week with less than 200 yards of total offense in their first game without star RB Derrick Henry. They did so with great play by the defensive line, and a short stretch where they intercepted two Matthew Stafford passes and converted them into 14 points on one offensive play (the second score was a pick-six).

It’s still unclear whether the Titans offense will run smoothly without Henry, and the Saints’ defense should play better after a letdown performance against the Falcons. Two weeks ago, they frustrated Tom Brady and the Buccaneers in the underdog role.

The Broncos are coming off a big performance at Dallas where they jumped out to a big lead.

Denver has the NFL’s second-best turnover/miscue margin on the season, as summarized in our Betting Recap. However, it could be a little overvalued coming off a big turnover performance against Dallas (the Cowboys went 0-for-4 on fourth down in addition to two turnovers).

The Eagles came up just short against the Chargers, in a game that was tied late. Philadelphia’s win odds suggest this one is close to even as well, but the public is heavily on Denver.

Yes, the Bills just put up a stinker against the Jacksonville Jaguars. But stick with Buffalo as a high-value pick in confidence-point pools.

This week features a lot of teams with high popularity, and the Bills have better win odds than all the rest.

Four other teams have higher popularity than the Bills this week, including the Pittsburgh Steelers over the Detroit Lions. As a result, sticking with the biggest favorite on the board and slotting it at high confidence is a value play if the public is more split on the top plays of the week.

The Vikings and Chargers are virtually even in our predictive power ratings. The biggest difference between the 5-3 Chargers and 3-5 Vikings is close-game results, as the Chargers are 4-2 in games decided by one score and the Vikings are 2-5 in such games.

That includes last week, where the Vikings lost in overtime and the Chargers won at the end of regulation.

The public is heavily on the Chargers here, but this is a pretty even matchup. That means there’s value in taking Minnesota in weekly contests.

The Chiefs aren’t a huge value play, but they’re a solid pick in both season and weekly pools based on relative value.

There are four other teams favored by between 2.5 and 3.5 points this week, and between 78 and 87 percent of the public is picking those teams. So of this group, pool entrants are relatively more comfortable making the Raiders their upset pick.

As a result, you should go the opposite way to differentiate. Take the Chiefs as the favorite while sprinkling in some other upsets in weekly prize pools.

Add in the other results, and underdogs had a winning record outright for the second week in a row.

In game-winner pools, the public averaged 7.3 wins in Week 9. The biggest outcome for the public was Arizona winning as the betting underdog (5.5-point underdog after Kyler Murray was ruled out). Over 70 percent of the public still went with Arizona.

Our season-long “Max Profit” picks averaged 6.7 wins, and the weekly picks averaged 7.1 wins. Most entries took losses on the biggest upsets. The Arizona result was the biggest swing result. It was the third game in the last two weeks that the public went heavily on a team that was a betting underdog and won.

Not only did underdogs win more games outright than favorites did, but several others got covers against the spread, including the Bears on Monday Night Football.

Of the 14 matchups this week, the more popular side with the public went 5-9 ATS.

The public averaged 6.3 wins out of 14 games in spread pools for the week. Those results could have been even worse for the public if some popular picks that strongly went against line movement had lost. Arizona was the biggest one, as that line moved eight points from its opening number.

Meanwhile, our pick recommendations averaged 7.7 wins in season-long max profit picks and 9.6 wins in weekly recommendations. That 68.6 percent cover rate and over three wins above the public average should likely lead to some higher reported weekly win rates in spread pools for Week 9.

The Los Angeles Rams may have turned in a poor performance on Sunday Night Football, but that has not deterred the public when it comes to spread pools. The San Francisco 49ers’ disappointing season is a bigger turnoff, apparently.

The Los Angeles Rams at minus-4 are the most popular spread pool pick of the week. 79 percent of the public is taking them.

The team that beat the Rams last week, the Tennessee Titans, is the next closest at 75 percent popularity as a 3-point favorite against New Orleans.

So far this year, teams with 75-plus percent popularity in spread pools are 8-12 ATS against the most common (early) contest line and 7-13 ATS against the closing spread.

Thursday Night Football this week is Baltimore at Miami. The Ravens are currently a 7.5-point favorite against the Dolphins, but that number could shift slightly based on news about Miami QB Tua Tagovailoa.

Tagovailoa missed last Sunday’s game because of a finger injury, and he’s questionable for tonight. We may not have official word on this one until closer to game time.

Whether he plays or not should not impact the pick in game-winner pools, where Baltimore will most likely be the pick. However, line movement could impact which way the spread picks go and whether there is value on the number in your pool.

Be sure to check back closer to kickoff.

We have several QB status questions that could impact win-odds projections as we head into the weekend. Here’s a rundown of some of the pending situations:

Make sure you get your updated picks as close to your submission deadline as possible this week so that you have the best available information on these and more.

Here are some college football value picks for Saturday.

We’ve already had one big upset this week with Baltimore losing on Thursday to Miami.

There are five other favorites of a touchdown or more this week, all with high popularity. That leaves eight other games where the spreads and win odds are closer.

One of those “other” games is now the Pittsburgh Steelers vs. Detroit Lions, as Ben Roethlisberger has been ruled out after getting placed on the reserve/COVID-19 list.

There are no notable value favorites this week. The only point-spread favorite drawing a lower pick popularity than its win odds is New England.

But the Patriots have win odds of 55 percent and pick popularity of 52 percent, so the edge there isn’t all that big. It’s basically just more than a toss-up where half the pool is on each side.

However, there are some high-value upset plays among teams who are only slight favorites.

Here are the upset plays you might see in weekly pools or in season-long pools where you are taking on a little more risk.

Our models gave the Eagles 50 percent win odds (they are +1.5 by point spread), so you could see them in season-long pools as the unpopular pick there. The rest could be part of your pick set in weekly picks.

Detroit has moved into that mix now that Roethlisberger is out. Among those, New Orleans and San Francisco are the most likely to appear in smaller weekly pools and at higher confidence in confidence-point weekly pools.

One popular pick has already fallen on Thursday, as 79 percent of the public has lost with the Ravens.

The only pick more popular than that is the Rams at 82 percent on Monday Night Football, so you will likely see our recommendations heavily on the 49ers.

Tennessee is another popular pick in spread pools, drawing 75 percent of picks against New Orleans.

Our models like the following teams compared to the current market win odds. They’re more likely to be picks depending on your pool’s spread number: