Week 1 of the 2022 NFL season features many close matchups. Here's what you should consider as you make your picks in pick'em contests. 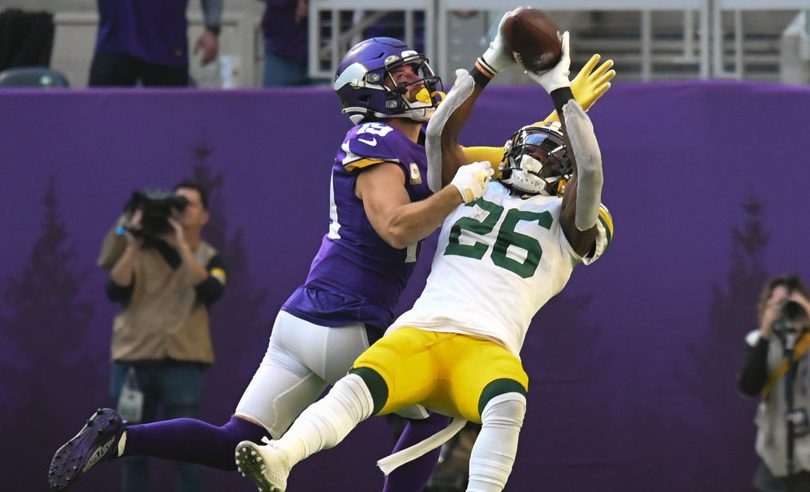 We have launched our Football Pick’em Picks product for 2022, along with our initial pick’em contest strategy and advice column for Week 1 of the 2022 NFL season.

We plan to periodically update to this post through Sunday of Week 1, so check back for updates. Here’s what’s available now:

For the opening week of the NFL season, we are seeing some late data shifts. These are impacting the value picks available.

The primary one among them is a game where we have seen the odds shift. The team that is now favored (Minnesota) has been the slight underdog all week.

Here are the key NFL value plays for Week 1:

In spread pools, you are likely to see picks on the Giants, as noted above, and also some games our models like and where the line has moved. Those include:

You could also see picks going against the most popular public spread picks. The two teams being picked by more than 70% of the public (besides Tennessee vs. the Giants) are Denver and Baltimore, so you may see some Seattle and NY Jets recommendations as well.

Here are your college football value picks for Week 2.

In weekly contests, these are the some of the picks you might see as upset values:

The 2022 NFL season has arrived. We get a great matchup to start with the defending champion Los Angeles Rams opening at home against the Buffalo Bills, who enter the season with the highest Super Bowl odds.

The Bills are the favorite in this game (-2.5) so you should expect to see them as the pick in season-long game-winner pools. However, Buffalo doesn’t have super-high win odds (55%), so whether you are getting the Bills or the Rams in weekly contests may depend on your pool size.

In confidence pools, this game will likely show up at lower point value either way. These are two great teams and we could see lots of offense, so sit back and enjoy.

Let’s highlight some upset picks that make the most sense for weekly prize contests.

In a season-long pool, picking favorites and letting others fall by the wayside over time is a solid strategy. In weekly contests where a few high-leverage games swing the standings, though, taking bigger risks can be the best play when the payoff makes sense.

Your recommendations in My Pool Picks for a weekly prize contest, particularly a larger one, might seem a bit crazy. But remember, the more entries you are competing against, the more extreme results you need. If you can take a team with a 25% chance of winning but is barely being picked, you increase your chances to win if you leverage that upset.

With that in mind, here are some of the best bang-for-the-buck upset plays for weekly contests. Which ones make sense (and how many) depend on your pool size and other rules.

This isn’t a huge upset pick, and the popularity numbers aren’t completely one-sided, but our models have the Vikings as a virtual toss-up in the home opener against the Packers, while the majority of pool entries are on the other side.

That makes the Vikings a solid play in weekly contests, where you aren’t taking on much more risk by picking the slight underdog.

The Giants are one of our top model plays if you are a betting picks subscriber, as we show value both against the spread and moneyline. Meanwhile, about half as many entries are picking them compared to our projected win odds.

The Browns travel to Carolina, where they will immediately face off against former QB Baker Mayfield. This is a game that has been on a rollercoaster as far as the win odds and spread throughout the offseason, based on the QB news related to both Mayfield and Browns QB Deshaun Watson. The Browns were favored by over four points right after the NFL Draft, it shifted downward after the Mayfield trade, and now has settled at the Panthers being favored with Watson’s suspension to start the year confirmed.

Jacoby Brissett is the starting QB for Cleveland in this one, and he has been a fairly average backup in recent seasons. But Cleveland still has a roster loaded with top talents, and you might see the popularity on this one continue to shift toward the Panthers as casual fans log their picks this week. That could make for some slight value on the Browns as an upset pick in weekly pools.

Below are some picks initially setting off the value radar for Week 1 in game-winner-based NFL pick’em contests. Things are bound to change as kickoffs near, but it’s worth keeping an eye on them.

The first thing we’ll note before getting to the games is that so far, there aren’t any huge value plays where the public picking rates are significantly off implied betting market odds.

That might change as public picking trends get more influenced by a larger number of participants who may not be as skilled as hardcore, very early pick-makers.

While neither Minnesota or Dallas is a huge value right now, both figure to be quality teams this year, and they are playing at home as slight underdogs. They each have a better chance to win than the public pick rates suggest right now.

In fact, our models have Minnesota (playing at home) as even with Green Bay, in a series where home-field advantage has been fairly strong over the years. Minnesota has a slight winning record (6-5 SU) as a home underdog to Green Bay over the last 20 years.

Meanwhile, Dallas will face Tampa Bay in the season opener for the second year in a row. Last year’s game went down to the final seconds in Tampa. Both of these teams have some offensive question marks due to injuries, but it should be a close matchup.

Both of these teams are among the larger favorites in Week 1, but their pick popularity isn’t so high that you should be tempted to gamble on an upset.

Meanwhile, Russell Wilson is playing his first regular-season game for the Broncos, and in a completely random coincidence, it happens to be against his former team. Our models give the new-look Broncos higher win odds than similarly popular favorites this week like Cincinnati and Tennessee. So right now, we don’t see value in picking a homecoming upset and would stick with the Broncos in Wilson’s debut.

There aren’t any underrated favorites in Week 1 right now (that is, a team favored in the betting markets but being picked at a lower rate than its implied win odds). One of the closest teams to becoming one, depending on how things shift before kickoff, is Miami.

As a result, the Dolphins are one of the shorter favorites you should probably stick with picking in both weekly and season-long contests this early in the season. They have lower popularity than some other favorites that we project with similar win odds (Kansas City, Washington), and they have higher win odds than several other toss-up favorites in Week 1.