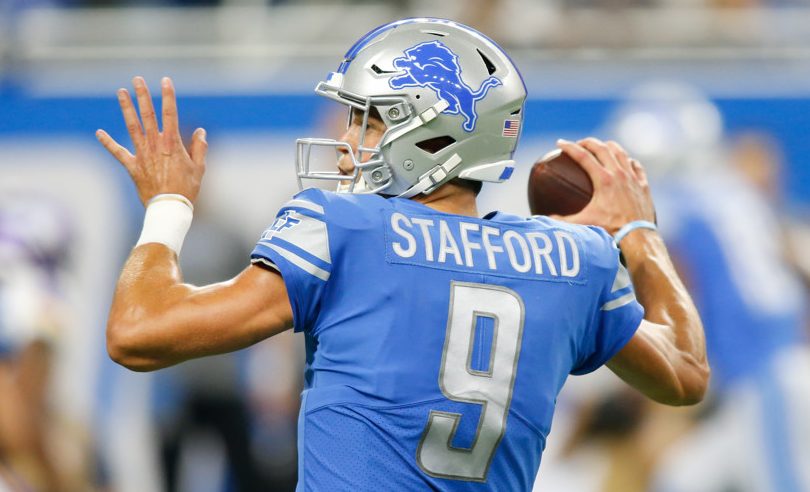 Matthew Stafford is back for Detroit, after the Lions went 0-8 without him last season (Photo by Scott W. Grau/Icon Sportswire)

With the season finally here, our NFL Week 1 value pick advice for football pools is back.

The analysis below should help you make smarter picks in your private NFL office pool or in online contests like ESPN Pigskin Pick’em, Yahoo Pro Football Pick’em, and CBS Sports Football Pick’em.

Our pick advice is different than what you’re used to seeing. Like everyone else, we want to identify the most likely winner of each game. However, at TeamRankings we only rely on objective prediction data that’s proven to be reliable — specifically, betting market odds and game projections from our algorithmic models.

Secondly, not many people understand that good NFL game predictions are only part of the story when it comes to maximizing your edge to win a football pool. You also need to consider how you expect your opponents to pick each game.

After all, you can only rise in your pool standings if you score points that your opponents miss. So in order to distance yourself from the competition, you need to do two things:

This approach to making picks is a big reason why since 2014, an average of 72% our subscribers have reported winning a prize in a football pick’em contest.

The Week 1 pick opportunities highlighted below are based on data from our Football Pick’em Picks product, which provides objective game predictions and projected opponent picking trends for every game.

Note that we are not saying that you should make all of the picks in this article — the upset picks especially. The best Week 1 picks for your NFL pool depend on strategy factors such as your pool’s size, rules, and prize structure, plus situational factors like your current place in the standings and the number of weeks left.

(To learn more, check out our free articles about strategy for winning football pick’em pools. If you want our game-by-game pick recommendations for your specific pools, you’ll need to subscribe to the product.)

What we are saying is that the teams mentioned in this post provide some of the best opportunities to differentiate your Week 1 picks from your pool opponents, by taking on only a modest amount of risk, or no additional risk at all. We also call out matchups where picking an upset is probably a terrible idea.

Big Favorite At A Reasonable Price

The pick below may not be significantly underrated by the public, but compared to other big favorites this week, it’s a relative bargain in terms of pick popularity. Think twice about picking against it; there are much smarter upset pick opportunities elsewhere.

The public does not appear to be fully aware of the opposite directions in which these two teams have headed. Indianapolis won only one more game than Jacksonville last season, but the Jaguars have been losing talent over the past few years and now look to be in complete tear-down-and-rebuild mode. Jacksonville has the lowest preseason over/under win total of any NFL team entering 2020, at 4.5 wins.

The Colts, on the other hand, have replaced Jacoby Brissett at quarterback with veteran Philip Rivers, and are the current betting market favorite to win the AFC South, just ahead of Tennessee and Houston.

Indianapolis is favored by 7.5 points in this game, with the second-highest Week 1 win odds (77%) of any team according to our projections, behind only Kansas City at 80%. Meanwhile, “only” 78% of public pick’em entries are picking Indianapolis so far, meaning that a healthy 22% of players are going with what would objectively be a significant upset.

To illustrate how a 78% public pick rate compares to other similar games, Kansas City is being picked by 97% of the public against Houston, and Baltimore is drawing 93% of picks against Cleveland. San Francisco, the only other team currently favored by a touchdown in Week 1, is being picked 91% of the time against Arizona.

So for one of the biggest favorites of the week, Indianapolis isn’t being wildly overrated, which is rare. If you are dead set on picking a major upset this week, don’t make it (relatively) popular Jacksonville.

2020 NFL Week 1 features several favorites that the public is picking at a lower rate than their chance to win. These types of teams are as close to no brainer picks as you can get in NFL pick’em contests, since you can take the team that’s expected to win, yet still “fade the public” (in relative terms, at least) at the same time.

The Lions are 3-point favorites at home against Chicago, and our models put Detroit’s win odds at 66%. Only 56% of the public is taking Detroit, though, basically seeing this game as much closer to a toss-up.

That means you get to take the field goal favorite with Detroit, while nearly half the pool is going the opposite direction.

Why might a sliver of the public be underestimating Detroit here? Well, the Lions were 3-12-1 a year ago, to start.

That win-loss record, though, included playing without quarterback Matthew Stafford over the last eight games of the season, when the Lions were terrible on offense and went 0-8. When Stafford was healthy, Detroit was much better on offense, and he’s back and ready to go to start 2020.

The Vikings got swept by Green Bay a season ago, playing particularly poorly in a primetime slot in December when the NFC North title was on the line.

With those results likely still fresh in some people’s minds, it’s not a huge surprise that a portion the public is doubting the Vikings, despite betting odds favoring Minnesota by 3 points. Our win odds give Minnesota with a 60% chance, yet only 56% of the public is picking them.

That means, again, that you can take both the favorite and the underrated team in this game.

Seattle won a ton of close games last year, going 10-2 in the regular season in games decided by 8 points or less. So the Seahawks weren’t as dominant as their 11-5 record would suggest.

With this game in Atlanta against the Falcons’ passing offense, the point spread currently favors Seattle by only 1.5 points, but 76% of the public is going with the Seahawks. (For additional perspective, this is almost the same percentage of entries that are taking the Colts against Jacksonville, a team favored by over a touchdown.)

With that many players going the other way, taking Atlanta is a clear value choice in one-week pick’em contests especially, where taking any reasonable risk to fade the public makes sense.

If you’re going to make a gamble on an underdog, you need to make sure that the potential reward if you get it right — that is, how much your odds to win your pool will increase — is big. Take a bunch of extra risk to make a super trendy upset pick, and the joke is really on you.

The pick below is definitely not appropriate for all pools. If you’re in a smaller, season-long pool, it’s probably not worth the risk. However, it should be seriously considered for single-week contests or if you only care about weekly prizes in your pool.

The Bengals had the worst record in the NFL last season, so it’s not a shock they are an opening week underdog.

Cincinnati did draft Heisman winner Joe Burrow at quarterback, though, and have some potential to surprise. They are only a 3-point underdog at home against the Chargers.

Meanwhile, the Chargers have plenty of question marks to start 2020. For the first time since December 31, 2005, LAC will start a quarterback not named Philip Rivers. (The last quarterback besides Rivers to start for the franchise was Drew Brees!) Tyrod Taylor is expected to start the season and the offense could look a lot different.

Our projections give Cincinnati a 45% chance of pulling off an upset, while betting odds imply closer to a 40% chance. So yes, we expect the Bengals to lose. But with only 30% of the public taking Cincinnati, it’s a gamble to consider in exchange for the chance to score points that 70% of your opponents miss.

Get All Our NFL Week 1 Picks For Your Pool

Once you know the best value opportunities of Week 1, you can typically increase your odds to win your pick’em pool by taking a calculated risk or two (or more).

If you’re in a confidence pool, for example, it may be wise to bump up the number of confidence points you assign to a value pick like Detroit or Minnesota, or perhaps take even more risk on a team like Atlanta or Cincinnati.

There are a lot of decisions to make, which is why we built technology to do all the data gathering and analysis. Based on algorithms we designed, our Football Pick’em Picks is the only product that customizes weekly pick recommendations based on the key strategy dynamics of your pick’em pools. Among other things, the product: