Who should you pick in your Super Bowl pick'em pool when picking straight up or against the spread? We go through the strategy in our picks article. 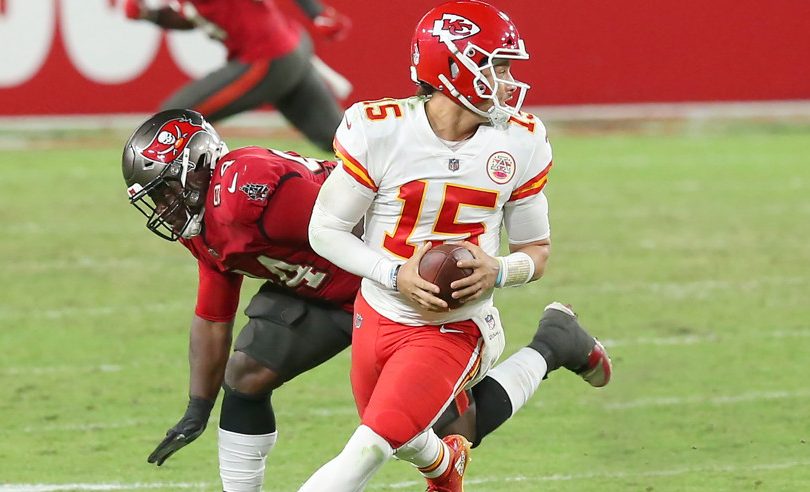 Should you turn around and pick the Chiefs or the Bucs for the Super Bowl? (Photo by Cliff Welch/Icon Sportswire)

Currently our models give the Chiefs a moderate 59% chance to win, versus 41% for Tampa Bay.

Yahoo’s national pick distribution shows 62% of users picking Kansas City, and 38% picking Tampa Bay. This means there’s a slight amount of value on the underdog Bucs. However, your strategy should also be based on your place in the standings.

If You Are in the Lead

If you are leading the pool, your ideal outcome is that you pick the same team as any person trying to catch you. If that happens, the outcome of the game doesn’t matter; they can’t pass you regardless. If you can deduce with confidence which team they’ll pick based on knowing them personally, or based on looking at their past picks, then you should pick the same team.

If you can’t deduce their pick, the public data indicates there is a slightly better chance that they’ll pick the Chiefs than the Buccaneers. However, if they are a savvy player, they may be assuming you will pick the favorite, and so they’ll pick the underdog. It’s tough to predict without knowing something about the psychology of your opponent. Since predicting the pick is very difficult, you might as well default to picking the favorite, and more popular team, Kansas City.

Further, if you are just narrowly in front of several entries, it is likely that some of them will be picking each of the two teams. In this case, at least some of the trailers will get their pick correct, so you’ll need to also be correct in order to stay ahead. Picking Kansas City gives you the slightly better chance of winning the pool, since they are the favorite.

If You Are Trailing

On the other hand, if you’re trying to catch up, you need to pick a different team than the person leading you. As above, if you can deduce which team they’ll pick, you should pick the opposite. Otherwise, we suspect that somebody in the lead at this point is aware of the betting market odds, and will be slightly more likely to pick the favored Chiefs. Which means that picking the Buccaneers probably makes sense.

However, there might be situations where you are slightly trailing several prize spots. If, say, there are six entries just in front of you for five prize spots, there is a pretty good chance that those entries will be split, with some taking Kansas City and a few others taking Tampa Bay to try and pass into the lead. If that is the case, you will (a) have a difficult time passing all of them, as someone is likely to pick each team but (b) could pass some of them by getting a pick right that they get wrong. In that scenario, also taking Kansas City, and banking on at least some entries going Tampa Bay, is a solid move.

The current market consensus line for the Super Bowl is Kansas City -3. Against that line, our models project the game as close to a coin flip, with a very slight edge towards Tampa Bay (50.7%).

Yahoo’s national pick distribution shows Kansas City -3 being picked by 56% (confidence pools) to 58% (non-confidence pools) of the public. Public betting data sources show a similar, but more extreme, story, with several books reporting that over 70% of the early betting action is on the Chiefs.

Given the above numbers, Tampa Bay +3 or +3.5 is the better “value” pick as we expect the Chiefs to be the more popular choice.

If you are trying to protect a lead, you should try to pick the same team as the opponent or opponents trying to catch you. Unless you have specific knowledge about their picks, you should probably go with the more popular team nationally (KC).

If you are trying to catch up, you need to pick a different team than the leader(s). Again, if you have specific knowledge about their pick or their pick tendencies, use that info. If not, you should pick the less popular team nationally (TB).

Generally, the actual line you are picking against in your pool matters. That’s particularly true this year with the most common spread being right on a key number of Chiefs by 3. Four of Kansas City’s wins this year have been by exactly 3 points, including the first game against Tampa Bay.

So if you are in a pool at -2.5 we would recommend Kansas City, for example, but at -3.5 we would lean to taking Tampa Bay, though your place in the standings should also impact that decision. If you are trailing several entries, taking Tampa Bay +2.5 might be a necessary risk because it will be even less popular, and you probably need it to catch a leader.

Some playoff pools involve picking against the over/under.

The current market consensus total for the Super Bowl is 56 or 55.5, depending on the sportsbook. Against 55.5, our models project the result as close to a coin flip, currently just 50.4% on the Over.

Public betting data sources show a huge bias towards the Over, reporting more than 70% of bets on Over.

Given that extreme public bias, Under is the better “value” pick, at 54.5 or higher. In our Super Bowl Betting Over/Under Trends article, we also noted that the Under has hit more often than not when the total has been above 50.

If you’re in a small pool where you will only potentially be tied with a couple people, using a key number close to the average predicted score makes sense. Those closest key numbers are 54, 55, and 57. There’s some chance with 55 of being sandwiched by opponents taking both 54 and 56 or 57, leaving you with only one or two numbers to root for. So unless you’re heads up, 54 is probably better than 55.

In larger pools, where several people will likely cluster their picks around the betting market over-under, it makes sense to move your tiebreaker total higher or lower in order to avoid being sandwiched like that.

For most people, given the public betting bias toward the over, we recommend going lower, rather than higher. The best options for this are probably 48 or 49. 49 is a more common score, but opens you up to somebody else taking 48 and snatching the low end numbers from you. Of course, how far away from the projected total you should go depends on how many people you expect to be tied with. In a really giant pool, going as low as 45, 44, or even 39 could make some sense.

However, if you are in a pool where you pick against the over/under line, and you are picking Over (based on our advice above, perhaps), then we recommend making your tiebreaker match your totals pick by using a value above 56.5. If it’s a small pool, 57 works. If it’s larger, and you’ll be tied with several people, you’ll want to go a little bit further from the middle. 62 is a good option, or 71 in really large pools.