Wimbledon Upsets: With Serena Williams, Venus Williams, and Wozniacki Out, Who’s In The Driver’s Seat?

The Women’s side of Wimbledon got a big shake-up yesterday as both Williams sisters and Caroline Wozniacki lost. Entering the tournament, according to our new Wimbledon women’s rankings, they were the three top favorites to win it all (!), so the field is suddenly wide open.

At first glance, the three losses are pretty spectacular, especially Venus’s loss to Tsvetana Pironkova. Given their specific 4th-round matchups, according to our ratings the chances of all three players losing were just short of 1%, the kind of odds that make you question the accuracy of the ratings system.

However, going into the tournament, our Wimbledon women’s predictions indicated the chances of making it past round 4 for Serena, Venus, and Caroline were 50.0%, 48.8%, and 48.3% respectively. So individually, all three of these players had about a 50/50 chance of getting bounced from Wimbledon on or before yesterday. In fact, as indicated in the notes on our player pages, a fourth round exit was the second most likely individual result for both Serena Williams and Venus Williams.

It’s the fact that all three got upset in round 4 that was so unlikely.

Still, a couple factors in the 2011 women’s bracket — the lack of front-runners and three-set (as opposed to five-set) match lengths — do make upsets more likely than on the men’s side.

Not A Top Heavy Field

Unlike the men’s side, where the top three players had around a 65-70% chance to produce a title between them, there were no clear favorites among the women in Wimbledon 2011. Out of the top 4 players in our ratings, one is retired, one is injured, and the other two had played less than half the matches that a normal professional would play over the past two years.

In fact, going in to this tournament there was about a 55% chance that the women’s winner would be claiming her fist grand slam trophy. Those odds are much higher now, with Maria Sharapova the only remaining previous grand slam champion, and with talented but unheralded players like Victoria Azarenka and Petra Kvitova showing off the tremendous depth of this year’s field.

The other factor that has led to more upsets on the women’s side is the three set format. While traits such as endurance or adaptability can impact a five set match, generally a longer game eliminates some of the room for variation and helps the stronger opponent. On the men’s side Rafael Nadal and Roger Federer can easily battle back from one bad set, but for the women, losing a set really puts them behind the eight ball.

The chart below shows the odds of winning a 3-set or 5-set match, given a player’s odds of winning each individual set. (We’re assuming all sets are independent, uncorrelated events.) 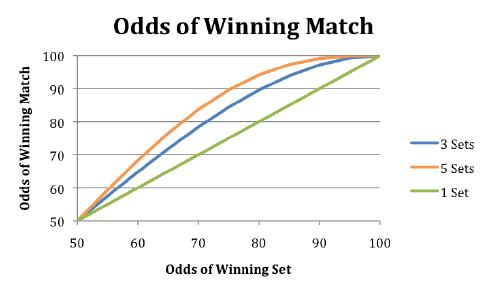 For example, if you have a 70% chance to win a set against a given player, you have slightly higher than a 75% chance of winning a three-set match against that same player. However, if you played a five set match, your odds of winning that match would increase to just under 85%.

From the distance between the orange and blue curves, you can see that the Williams sisters’ roughly 80% chance of winning in the fourth round would’ve been around 85% if they had played five sets instead of three. While a 5% difference doesn’t sound like much, it can add up quickly over the course of seven rounds and make a major impact over the course of the tournament.

Whether they were the results of a deep field, short matches, or something else entirely, the upsets of Caroline Wozniacki and the Williams sisters have suddenly left the women’s field wide open at Wimbledon. Most fans likely now favor Maria Sharapova, given her previous success at the All England Club, to win. Gamblers seem to agree, giving Sharapova the best odds at leading sportsbooks.

Interestingly, our ratings, the WTA ratings, and the Wimbledon seeds all rank another player as better than Sharapova. That player is Victoria Azarenka, the Belorussian made (in)famous by her ear piercing grunts.

The following table shows our ranks for the remaining women, their WTA ranks, and their current Vegas implied odds to win Wimbledon.

Note: Because the WTA ratings effectively penalize good players who play fewer tournaments, and our Team Rankings ratings don’t, there can be some pretty significant differences between each ranking. Our ratings, although relatively new, have proven to be better from a predictive standpoint over the past year — but we still have many improvements to make to them.

The Curious Case of Azarenka

The table above demonstrates how undervalued Azarenka seems by the betting markets. She’s the highest rated player still alive by both ranking systems, yet only has the third-best implied chance to win by the gambling market. Why might this be? It seems almost entirely based on people backing Petra Kvitova over her in the semifinals.

In fact, Kvitova, despite being the worse-ranked player, did beat Azarenka in two sets in May. But is public sentiment placing too much value on one recent result, as that fickle public so often loves to do?

To investigate this phenomenon, we set up a quick analysis. We used sportsbook-listed odds for each player to advance to any of the remaining Wimbledon rounds. From those odds, we can calculate a player’s implied odds in future rounds of the tournament.

What we discovered from this analysis is that the market is giving Kvitova roughly a 66% chance to win her semifinal match, provided that she makes it past the quarters. That’s the highest of any remaining player, despite the fact that her most likely opponent is Azarenka, the highest remaining seed. (It’s also only barely worse than her 73% chance to defeat Tsvetana Pironkova in the quarters.)

Frankly, we don’t agree with that assessment. We’ve written another post on why we think Victoria Azarenka is undervalued, but here’s a quick summary.

While it could be the case that there hasn’t been enough betting volume on women’s Wimbledon futures to make it an efficient market, based on multiple rating systems, Azarenka’s chances to win Wimbledon certainly appear higher than indicated by the market, and Kvitova’s lower. Even if there are some matchup advantages that benefit Kvitova against Azarenka, they’d have to be pretty darn huge to justify the current implied odds.

The bottom line is that among the ladies still surviving at Wimbledon, Azarenka should be considered a co-favorite, not a second tier player.